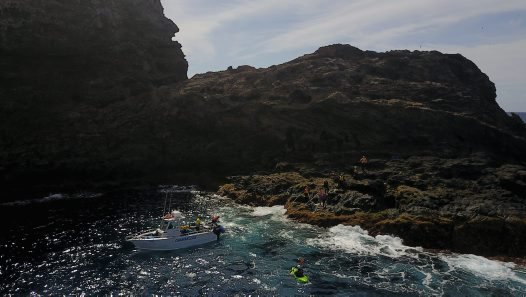 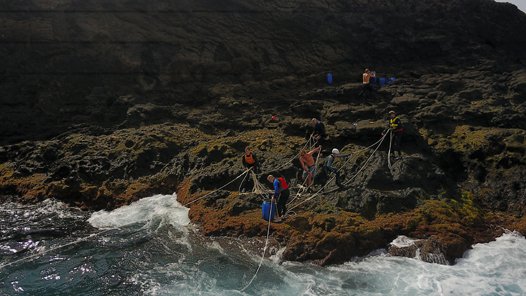 It seems too improbable to be true, I must be dreaming. I rub my eyes and look again. It's not a dream, here I am on Balls Pyramid with the rest of the Australian Museum expedition team: Malacologist Dr Frank Koehler, Hank Bower from the Lord Howe Island Board, Tom Bannigan, a freelance journalist with a penchant for drone videography and six specialist climbers: Zane and Paul Priebbenow, Vanessa Wills, David Gray, Keith Bell and Brian Mattick.

Organising this expedition has consumed my life over the past four months, and I was struggling to accept that we had actually landed on Balls Pyramid on Tuesday morning, the exact day we had planned to.

The experience has been surreal, from the moment we glimpsed our destination silhouetted against the distant horizon, as we rounded the towering Mt Gower at the south end of Lord Howe Island.

It just couldn't be this easy, surely any moment a massive storm would swoop across the ocean and dash our plans. Balls Pyramid is famously difficult to land on. Previous climbing parties, and even the Lord Howe Island-based weeding crews, have had their landing plans thwarted so many times that we expected to meet the same fate.

Yet the weather gods had smiled upon our audacious plans! And here we are, using expert climbers to assist our scientist to search for the world’s rarest insect — the Lord Howe Island Phasmid — in places barely accessible to humans.

We spent Monday in a frenzy of activity, preparing our gear, meeting with our skipper for the landing, checking the weather forecast and consulting the oracle of Balls Pyramid landings, Clive Wilson.

But, it’s all come together and here we are preparing to add some science to the mystery and legend that surrounds this 550-metre-tall volcanic rock.