‘Risk’ is a word that occurred frequently in a talk given in 1995 by Caroline MacLulich, head of education at the Museum. The subject of the talk was the Interpretive Theatre program that started at the Museum in 1993, and continued to stage regular productions until its final performance in 2000.

However, theatre is a wonderful way to express ideas and can therefore clearly put the argument that museums are about ideas, not just objects. Theatre can be used to interpret an exhibition beyond the objects on display and give them a context that is not immediately obvious. Theatre can be used to transform the understanding of the viewer with multiple interpretations that prompt questions and provoke debate.

The Museum was not completely unaccustomed to working with theatre, as it had previously staged ‘imported’ performances. Each of these was associated with a current public program, and enhanced the experience of guided tours, demonstrations, lectures and the commentary of explainers and volunteers.

There was concern, however, from various points of view. For those not attending performances, theatre can interfere with their access to, and enjoyment of exhibitions. Elderly and disabled people may find there is limited seating available. For the performers, museum acoustics may not be suitable, and will there be sufficient space for rehearsals, change rooms and storage?

The artist-in-residence at the time was theatre director Yaron Lifschitz, who was given the task of setting up the program and running performances for a trial period of four months during which time it was carefully evaluated. Yaron also produced a framework and policy for theatre at the Museum.

The first two programs related directly to current exhibitions, with a children’s puppet show illuminating the Shark! exhibition, and the Rituals exhibition used as a performance space in which to explore ideas about aging, adolescence, birth and death in different cultural contexts. Visitor surveys showed that the performances boosted attendance at the Rituals exhibition and increased understanding of its concepts.

A program unrelated to an exhibition was also part of the trial period. The program addressed the possible effects of the General Agreement on Tariffs and Trade, or GATT, on the environment and on developing nations. It consisted of a French style farce called GATT the FAX, a display and a public media debate. Both staff and visitor surveys were collected and everyone enjoyed the performance and agreed that they would return to see other performances on other topics. More than 90% of those surveyed felt that the program was an effective way to convey complex information about GATT.

A different note was struck by The Australian Financial Review, which stated that the Museum presented a biased interpretation of GATT, but even that had its positive side, as it increased awareness of the Museum as a place where issues could be discussed.

Faust’s House, a feminist account of the Faust myth, was the final program in the four month trial period. It was a four act play written by Beatrix Christian, exploring science and its effect on those involved with it throughout history. To make the most of the atmosphere and architecture of the building, each act moved to different area of the Museum. This was the first program for which an entry fee was charged, and the majority agreed it was good value. The Sydney papers carried reviews of the play in their arts sections, reinforcing the idea of the Museum as an arts venue.

The trial period was considered a success, so more performances were produced and each was carefully evaluated in terms of audience and objectives. Probably the most ambitious undertaking was a series of theatre performances to help interpret the Rediscovering Pompeii exhibition. Theatre isn’t always a suitable aid to interpretation, but after careful assessment, Yaron devised a theatre program with three separate approaches: Death and Taxes, Vox Populi and When the Mountain Comes, to provide context for the exhibition in the absence of a living culture.

It was judged from the beginning of the Interpretive Theatre program that the simple approach was not adequate, as it seemed redundant to use theatre to provide information that people could read from labels or catalogues. The Rediscovering Pompeii programs were extensively surveyed and they not only provided alternative viewpoints, they fuelled the imaginations of the audience members.

Conventional wisdom sees museums as places full of complex objects that require experts to interpret them for visitors. The Interpretive Theatre program worked on the principle that audiences were filled with highly intelligent people in search of new experiences and an enhanced understanding of the ideas and issues behind an exhibition. So they rejected the theatre-in-education approach, and chose instead to keep a certain distance by making comments, challenging ideas, being critical and provoking debate. The program ran for years and provided visitors with a great deal of pleasure, and above all, made them look beneath the surface and ask questions. Risky indeed!

Lantern slide collections in the AM Archives 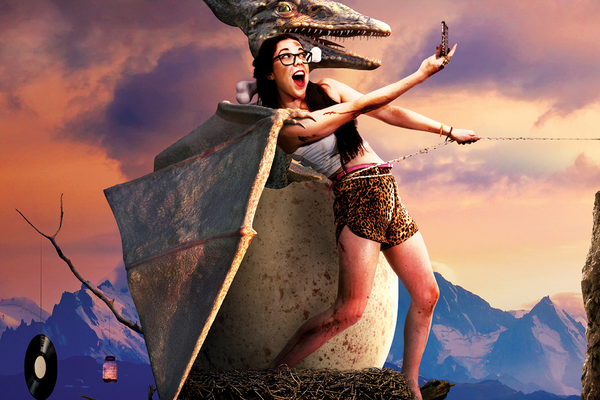