From 1889 when the Trustees allowed ‘scholars, accompanied by their teachers, to use the Museum on Monday afternoons for teaching purposes’ the museum played an educational role. This role was expanded in 1905 when Gallery demonstrations by museum staff became a regular weekly feature, mainly attended by teachers. However in 1909 these were superseded by public lectures given by both visiting specialists and museum staff. These Popular Science Lectures presented in the newly built Lecture Hall, were designed for the general public and became ‘a well established feature in the intellectual life of Sydney’; they continued until the 1960s, when they lost popularity due to competition from television and were discontinued. Public lectures were revived by the Australian Museum Society, now known as Museum Members, and are still presented at the Museum but no longer on a regular weekly basis.

In 1922 the Trustees extended the scope of these popular lectures to include suburban and country centres, beginning The Australian Museum Extension Lectures with a talk on Lord Howe Island given by Mr A R McCulloch at the Railway Institute in Devonshire Street in Sydney. The President,Dr T Storie Dixson, gave a brief preliminary address on the aims and work of the Museum.

Lectures specifically aimed at school children commenced in 1924 and continued until 1946. Specimens, lantern slides and later films were used to enliven these lectures, and questions from the children were encouraged. Mr. Kinghorn was the first of the Museum staff to present radio talks for children, and he and other staff members became regular presenters on the ABC radio program The Children’s Session, later known as The Children’s Hour.

Educational activities at the Museum continued to be shared by all Museum staff until the creation of the Education Section in 1946, headed by Allen Strom on secondment from the Department of Education. His title was Schools Service Officer and his stated purpose was to extend the part played by the museum in school education. His functions were to collect and supply information to schools, arrange school visits to the museum, and visit schools to provide advice to teachers.

The second Education Officer, Beryl Graham, added a range of programs including a loan collection of large black and white photographs and natural history specimens, a series of question sheets for the use of children in Museum galleries, classes for visiting children in the lecture theatre, holiday film programs, an expanded selection of free leaflets to answer public inquiries including some written specifically for children, and demonstration lessons at the Museum for Teachers' College students.

1953 ushered in a period of expansion and diversification for education at the Museum. That year Patricia McDonald, the newly appointed head of education services, organised the first Exhibition of Children’s Posters illustrating their studies at the Museum, and the following year she coordinated a Special Exhibition for Education Week called Age and Animals.

During the 1960's several important programs were developed, some as a result of ideas Patricia McDonald formed during her 1961 tour of American Museums. Among them was a Children’s Room with an Education Officer on duty, housing a special display related to a topical event.

During the 1960s Education Officers conducted some of the first research work on museum visitor behaviour and the effectiveness of museum exhibits. In 1966 the Australian Museum, under the auspices of the Australian National Advisory Committee for UNESCO, held a seminar entitled ‘The Role of Museums in Education’.

In the 1970s a new Education Centre opened which allowed an expanded program with a more flexible approach. During this time the Museum partnered with Taronga Park Zoo, the Royal Botanic Gardens and the Art Gallery of NSW to present joint educational activities. The 1977 Biennial Conference of Museum Education Association of Australia was held in Sydney, hosted in part by the Museum.

Also during this time the Education Service further extended its reach with a selection of programs for people with special needs, in particular the Wandervan. Other outreach services included a program of Outer Urban Exhibits for children who could not easily access the Museum, a series of seminars on Museum Education to the first group of post-graduate Diploma in Museum Studies students from University of Sydney, and the Drop in After School Program for children living in inner city suburbs to encourage them to develop their interests.

A review of all programs conducted by the Education Section was completed in 1981, one result of which was a program of trained volunteers to assist with school visits. The review also established the need to improve the quality of printed materials, so in 1984 in a major publication program was undertaken of Teachers' Ideas Packs (TIPS), activity sheets, school newsletters and posters.

The outreach programs of the 1970s were extended in the 1980s to include Sunday at the Museum with activities for all the family, the Dinosaur Picnic in Hyde Park to introduce young children to the Museum, a national environmental competition for schools, the Museum-on-the-Road truck which transported exhibitions to country towns, public seminars in country towns in association with Museum-on-the-Road, and a work experience scheme in conjunction with the NSW Department of Education. The School Loan Case Service was enhanced and became Museum-in-a-Box, and the Outer Urban Exhibits Service was also upgraded and changed its name to the Museum Train.

During this time the Education Section extended its footprint at the Museum completing the Action Room to provide activities for students, the Discovery Room with interactive hands-on exhibits for children, and the Dinosaur, Investigating Animals and Aboriginal Australia Rooms to provide expanded information to all Museum visitors. A self-guided visit program for schools and the employment of Museum Guides further enhanced the visitor experience.

A review of extension services and class visits was completed with an emphasis on marketing the Division's services. In 1986 school holiday activity programs and Sunday at the Museum were discontinued, the Museum Train ceased to run from December 1988 and the Wandervan program ended in 1989. Also in 1989, Education library collections were converted onto the Australian Bibliographic Network, a national shared cataloguing network now known as Libraries Australia.

In 1990 the Education Division ran a national conference at the Museum entitled ‘Where are we Going?: Evaluation in Scientific and Cultural Institutions’. The conference was booked out before it began and the resulting papers were well received both nationally and internationally. At this time the Education Division was reorganised into Visitor Services, Education Programs, Products and Services, and Resource Services; the latter included Museum-in-a-Box and Museum-on-the Road.

Another exciting development of 1993 was the introduction of Australia's first museum theatre program, designed to innovatively interpret exhibitions and ideas. Theatre director, Yaron Lifschitz, worked as part of the Artist-in-Residence program researching and developing ideas in consultation with Museum staff. This resulted in a range of theatre performances for both adults and children until the Theatre Unit staged its final performances in 2000 and was disbanded during the major Museum restructure of 2000/2001.

1994 saw the opening of Search & Discover. This area is still hugely popular with Museum visitors of all ages and features hands-on specimens, labelled specimen drawers, live animals, books and information folders, and is manned by helpful and enthusiastic staff. Kids’ Island, now known as Kidspace, was opened in mid-1999 to provide a play and learning space designed specifically for children aged 0-5 years.

Heads of the Education area: 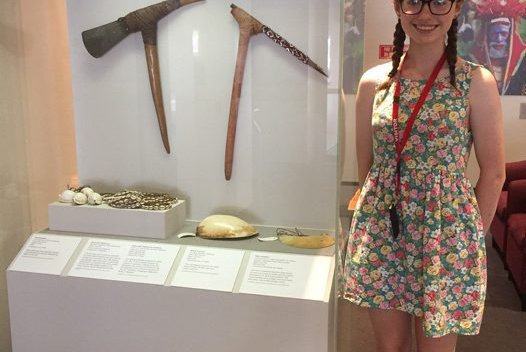 Prepare for a great adventure as the Sydney Science Trail gets ready for children across the country (5-15 years), and their adult friends and teachers, to join the mission to help planet Earth.