Life at the Museum

Fred was born in Crystal Street, Petersham on 13th August, 1905, as an identical twin. Growing up in Petersham he participated in many of his father’s hobbies such as gardening, swimming and cricket, as well as caring for the family pigeon loft. At age 14 his neighbour Mr Lucas, a carpenter at the Australian Museum, told him that a position was available as library clerk. On the 23rd March 1920, he began what was to be a long career at the Museum. After ten years in the library and 18 months in the Department of Birds and Reptiles, he was employed as an assistant in the Anthropology department. In 1993 Fred recalled:

"When the Department of Ethnography required an assistant all of the other scientific assistants – all zoologists with one in mineralogy – declined the invitation by the Director and I WAS APPOINTED. I had always taken a keen interest in art, visiting exhibitions of paintings in the private galleries in the city and also at the Art gallery of NSW. The opportunity to handle the skilled craftwork of the Australian Aborigines and of the Pacific Islanders in particular, appealed strongly to me and I accepted the position with great pleasure."

In 1933 he enrolled at the University of Sydney in the newly formed Anthropology Department under the supervision of Professor Adolphus Elkin. His thesis was accepted in 1935 and was titled ‘The Material Culture of Eastern Australia, a study of factors entering into its composition’. McCarthy and his future wife, Elsie Bramell were the first university trained anthropologists employed by the Museum.

With Fred’s marriage to Elsie in 1940, she was forced to leave her position at the Museum. In 1941 he was promoted to First Class Scientific Assistant and appointed curator of the anthropological collections. When Elsie resigned, the anthropology department was reduced to one, and she was not replaced until 1963 with the appointment of an assistant curator. However much of McCarthy’s field work was conducted with his wife and friends on weekends as the Museum had no vehicles to use.

McCarthy’s research was based on aboriginal prehistory and archaeology of Australia. He extensively recorded and photographed ethnographic aspects of aboriginal communities he visited, taking him all over Australia.

In 1948, McCarthy joined the American-Australian Scientific Expedition to Arnhem Land which was led by Charles Mountford. This was a cooperative undertaking by the Commonwealth Department of Information, Smithsonian Institute and the National Geographic Society among other institutions. During this 9 month expedition, McCarthy collaborated with Margaret McArthur and Frank Setzler, curator of anthropology for the US National Museum. McCarthy carried out work in areas such as Umba Kumba Mission Station, Groote Eylandt, Chasm Island and Onguruku Mission Station. These investigations covered a wide range of subjects, including Indigenous arts and crafts, ceremonial rites, bark paintings, stone arrangements, social organisation, totemic sites and subsistence. McCarthy later reflected on his time in Arnhem Land stating:

"Each member of the expedition used an army tent as sleeping quarters and laboratory, and normal army rations, slightly supplemented, formed the diet. Supplies were transported by boat, and also by the RAAF in Catalina’s and Dakotas. Uncertainty of boats caused some anxious moments."

Life Outside of the Museum

In 1964 McCarthy left the Australian Museum and was appointed the Foundation Principal of the Australian Institute of Aboriginal studies, which he held until retirement in 1971. The organisation is now known as the Australian Institute of Aboriginal and Torres Strait Islander Studies (AITSIS). With the establishment of the Institute, research funds were made available for those working in Aboriginal Studies, including research projects, carbon dating, artefact analysis, publication costs and preservation. McCarthy was an advocate for the development of the profession remarking that “until an active interest in Australian archaeology is taken by the universities and museums… the situation will remain unaltered”. McCarthy created the Institutes newsletter which became a platform for professional archaeologists to exchange their work.

McCarthy stayed busy in his life after the Australian Museum, serving on several notable committees and consistently publishing new work. He served as a Convenor of the Advisory Panel on Prehistory and Material Culture, and held every position on the Council of the Anthropological Society of NSW, of which he was made an honorary life member. He served on the Council of the Royal Society of NSW for 9 years, becoming president in 1956 and once again was awarded an honorary life membership. In 1957, McCarthy was appointed the president of the Anthropology section of ANZAAS, and was the Australian member for the Council of the Far Eastern Prehistory Association.

As early as 1938, McCarthy was responsive to the threat to aboriginal rock art and engravings. With his colleague, Sydney University’s Professor Shellshear, he pushed for state legislation to protect and preserve Aboriginal sites. Despite continuing efforts, it was not until the 1970s that the commencement of legal protection of Aboriginal Heritage was realised. McCarthy also made extensive contributions in establishing a national site register for ‘Aboriginal relics’. In 1993 McCarthy gave a lecture on his career and commented:

I drew up an act for this purpose, and with the support of the Australian Museum, the department of Anthropology of the University of Sydney, and the Anthropological Society of NSW, we persuaded the NSW Government to enact legislation which made it necessary to obtain a permit from the National Parks and Wildlife Service to collect on or excavate archaeological sites in NSW.

Throughout his career, McCarthy published over 300 pieces of work. He was awarded the Degree of Honorary Doctor of Science in 1980 by the Australian National University. In 1990 he was made a Fellow of the Australian Academy of the Humanities in recognition of his services to Anthropology. McCarthy left a lasting mark on Australian Archaeology and Anthropology that will not easily be forgotten. He died in 1997 from a stroke. 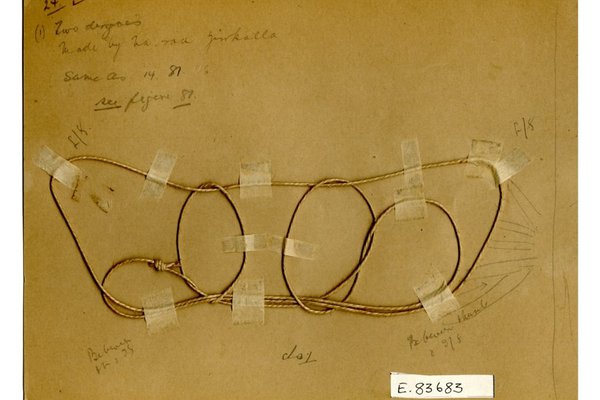 Survival and revival of the string figures of Yirrkala

String figures, or Matjka-wuma, are patterns or designs made on the hands with a loop of string.