String figures of Yirrkala were collected by Frederick McCarthy (a curator at the Australian Museum from 1920 to 1964) in 1948 on the Australian-American Scientific Expedition to Arnhem Land. This is the world’s largest known collection of string figures from one community made at the one time.

Ngarrawu Mununggurr, McCarthy’s principal collaborator and informer, made the majority of the 192 figures in the collection. McCarthy was greatly impressed by her knowledge of designs, her powers of recall and skills in figure-making: ‘Her astoundingly wide knowledge of the designs, sequences of manipulations and subjects is, from the technical and quantitative points of view, proof of a mastery of her craft and of the possession of highly intellectual powers of mental and manual co-ordination. With Na:rau string-figure-making is an art.’

In November 2009 two members of the Yirrkala community visited the Australian Museum to view the collection, Djarpirr Mununggurr, an able string figure maker herself and the artist Naminapu Maymuru-White, the daughter of Ngarrawu. Spending time in the museum’s stores, they were intrigued to see how string figure making had been converted into collection objects, documented and preserved. Naminapu was pleased to see the work of her mother valued in this way, and she felt that the collection provided a direct link to her mother and to that time in the life of their community.

String figure making continues as a popular activity in Yirrkala in a standard repertoire of well-known figures and techniques, a remnant survival of what, from the evidence of the collection, was a highly developed cultural practice.

The community’s reconnecting with the collection through the work of Robyn McKenzie (a PhD researcher at the Australian National University in Canberra) has provoked a resurgence of interest in string figures. A number of Yirrkala women participated in workshops at the GARMA Festival, teaching visitors how to make string figures. In response to the collection itself, a series of etchings of figures made with bush string (hand-made from natural fibres) were displayed at the Gapan Gallery in Yirrkala in 2010. In August-October 2013 these prints were displayed in the exhibition 'String Theory' at the Museum of Contemporary Art. 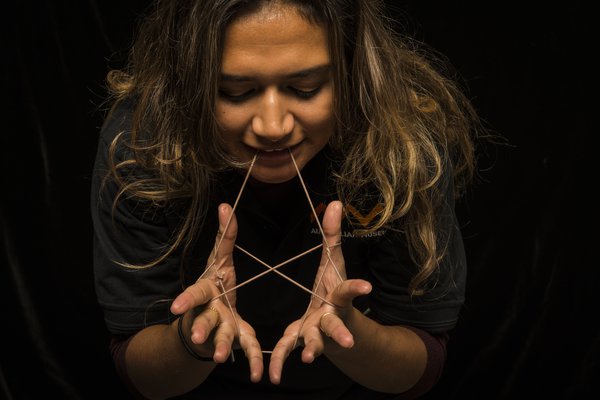 A series of short videos and written instructions to help you play kamai, or string games.