In the Torres Strait Islands turtle shell masks were worn for rituals and ceremonies. Masks represented ancestors and associated totems, frequently the crocodile. Sometimes they were in a form of a human face or animals such as birds, fish or reptiles and occasionally combined the features of both humans and animals.

This mask represents a crocodile’s head with the long snout made from turtle shell. The teeth and ears are made from wood. White pigeon feathers are attached to a triangular bamboo projection and cassowary feathers, coconut fibre, cloth strips and shells hang from the mask. It would have been worn by men in ceremonial dances and rituals such as initiation or fertility.

Torres Strait Islanders have a long-standing tradition of making turtle shell masks. The sheets of shell have been carefully cut and then moulded to the required shape by pressing them with a hot stone. The pieces were neatly sewn together, often sealed with resin and attached to a wooden frame.

In 1907 Charles Hedley and Alan McCulloch, marine biologists from the Australian Museum spent several weeks on Mer Island. They collected specimens of wildlife in coastal waters and on the island, as well as various artefacts from Miriam people, who populate and own the Island. Among nearly 170 collected artefacts was this crocodile mask. It was one of only a few artefacts they photographed and the only one they sketched in the field, possibly indicating an appreciation of its appearence and rarity at the time. Some of the traditional practices and ancestral ceremonies which led to the production of turtle shell masks were relinquished with the adoption of Christianity by the Islanders in the 1870s.

This style of crocodile mask is typical of the western Torres Strait, so it is intriguing that it was collected on Mer, the most easterly island. We don’t known whether it was brought to Mer especially for the collectors or was it there for another reason. It is possible that, like many artefacts in the Hedley and McCulloch’s collection of 1907, this mask could have been made for the collectors. Such assertion may be supported by the fact that the back of the mask, which would cover the head of a dancer, is made from turtle shell pieces that were probably not cut specifically for this mask. They were likely reused from other disfunctional or damaged artefacts, overlapping and missmatching in a manner unusual for the high quality craftmenship of the majority of turtle shell masks.

The Bruce and Black Collection from Mer (Murray Island), Torres Strait (about 1900)

Learn about the twin collections from Mer.

The Torres Strait Islanes Collection at the Australian Museum 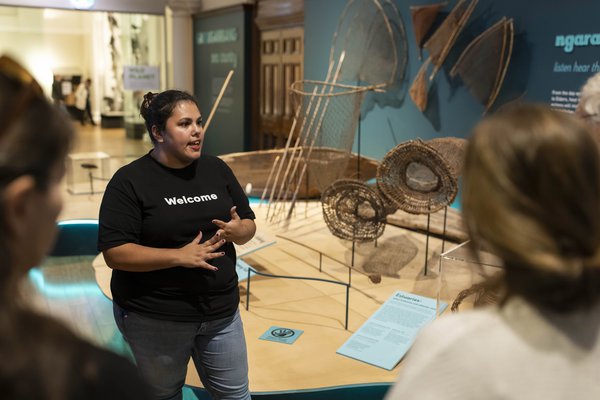