Zugubal is plural for Zugub. These beings occupied the islands scattered over the sea. In western Zenadh Kes (Torres Strait) they looked like humans, but were not ordinary humans. With special facilities and powers Zugubal could change into any being or shape in the natural world. They were able to bring about lightning and thunder, to control wind and rain. They could manipulate the temper of the sea at will.

In this print a group of Zugubal travel in the canoe, navigating by the stars of their ancestors, the Zugub leaders Thagai and Kang, whose movements they follow in the constellation of stars. And the sky is full of meanings and significant signs. Spirits of the ancestors are looking down on travellers, and constellations transform from one stage to another. The Southern Cross is the left hand of Thagai, holding the spear, while the Corvus (Raven) constellation is Thagai’s right hand. Scorpio is where his brother Kang is located.

This, over two metres long linocut (print) has a lavishly carved background, organically united with Zugubal and their canoe. The firmament contains numerous cultural accessories, symbols and meanings, related to the pre-Christian tradition of Zenadh Kes culture and its rich tradition of narratives. And these narratives inspire artist Alick Tipoti to reflect and document the tradition of his nation in linocut. His images are populated with forefathers, ancestral beings, land and sea creatures, artefacts and spirits, all interwoven into the sky, sea and the islands. All representations and symbols in his images are united by the stories that Tipoti ardently learns and retells to his people and his viewers.

Born on Thursday Island in 1975, Tipoti studied visual arts and adopted linocut as his favourite medium. The artist considers linocut as the best form of preserving, propagating and narrating the identity of his culture. He believes that the language of his ancestors Kala Lagaw Ya of the Maluilgal (mid-western islands of Torres Strait) is a key to understanding his culture. Aptly he has been given the traditional name Zugub, allowing him to relate better to ancestral spirits and to interpret their stories. He does it superbly in beautifully crafted prints, imbued lyrically with traditional stories.

Tipoti has received numerous prestigious awards, including the Telstra National Aboriginal and Torres Strait Islander Art Award 2003 and 2007. His artwork was exhibited in London and New York, cementing his reputation as a prominent Torres Strait artist. 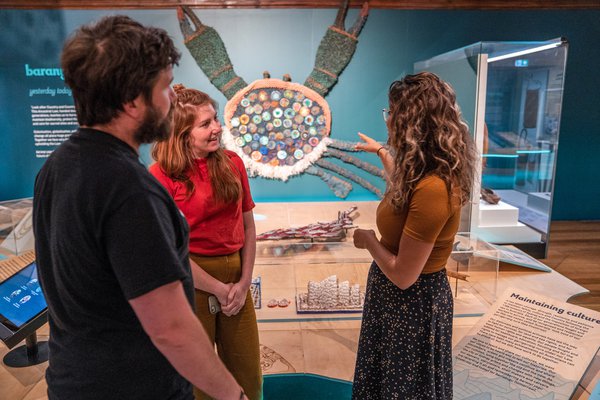