It turns out that last night's storm was the worst in over 60 years, with more than 30 tragic deaths from drowning, mudslides, lightning and a house collapse. Over 80,000 passengers were stranded with cancelled flights and the TV news said it caused an 8 hour traffic jam.

The media also reported the positive side of a population going out its way to help on other. Beijing was also flushed clean, the smog was washed from the sky, we saw the first blue sky of our visit as well as the mountains that surround the city. It was also the first time you couldn't look directly at the sun.

But it was back to the Beijing Museum of Natural History for our second day of performances. It all went smoothly(ish). Museum staff suggested that Winny could walk around the edge of the room so that the kids who weren't up the front could get a closer look. The shocked look on the staff's faces after the show, however, told the story of how badly that good idea went.

They didn't expect that Winny would be under siege, even after the kids' behaviour the day before. They weren't able to surround her to stop the kids grabbing, tugging and pushing her in their excitement. Sometimes you wish Winny was alive, that would bring a bit more respect. The communist newspaper reporter was there to report on the show. Who knows what she made of it.

In our break between shows we took off to see the Temple of Heaven in the park beside the Museum. The Temple was built nearly 600 years ago and was the stage of an elaborate annual ritual by the emperor to ensure good harvests in the year ahead.

We cut it fine on our return - its a big park - but the next show started on time. This time I again did a lap of the room at the end, but I moved at speed and was halfway around before the kids realised the show was over and the star was getting out of there quick smart. So it was only in the last 20 meters that they swarmed the dinosaur.

The final show was perfect and again the kids loved an Australian dinosaur. The parents enjoyed the tweaks we made whereby we got the children to join in by speaking English to Winny - as she doesn't speak Chinese, obviously. Chinese parents value education and would've liked that their children were hearing English and that we got them to practice a little too. Ah, Winny, ever the educator.

We played to over one thousand people, even though I was told there were only 600 tickets sold. Following the show we packed up Winny to ship her back to the Australian Museum. See you in Sydney in a week, girl. I know she'd love to go back to China for an encore.

We went to a shopping precinct that was built into to a Disneyland-like vision of old Beijing. It seemed funny to build a new sanitised version of the same suburb that lies next door but isn't promoted because of it age and decrepitude.

The best discovery was the twist on the toffee apple: toffee strawberries. Eight to a skewer, flattened and coated in toffee. The Shop Of Chinese Design was interestingly over staffed, which a lot of places seem to be, and these staff members shadowed us, dressed in orange. Either thing is creepy, but both together...

Dinner was an aimless, wandering affair with BBQ'd chicken pieces covered in spices and cooked on skewers in one restaurant. Well when I say 'in a restaurant' I mean in an alley sitting on tiny chairs. Then we moved to a Chinese Muslim restaurant where we chose a beef dish based on the photo-menu. It turned out to be a capsicum dish with a smattering of brown. We still felt hungry afterwards, so it was back to last night's place for more of those beef and carrot dumplings. 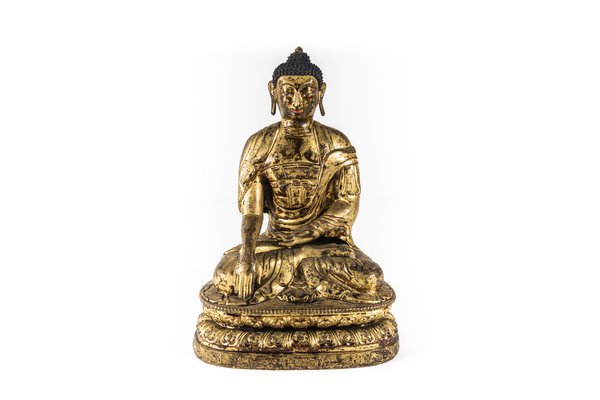 A gilded Chinese statue in 3D

Children and families
Early years
Primary school
Read more
Back to top
You have reached the end of the page. Thank you for reading.