The genus name Dilong comes from two Mandarin words, di meaning 'emperor' and long meaning 'dragon'. The species name paradoxus is Greek and refers to the surprise of finding protofeathers on a tyrannosaur.

Dilong paradoxus is one of the smallest tyrannosaurs known, reaching about two metres in length, and had an unusual Y-shaped skull crest (with two ridges running along its snout). Unlike later tyrannosaurids, most early tyrannosauroids such as Dilong had three fingers and relatively long arms.

Some specimens of Dilong were found covered in filamentous ‘protofeathers’, which is the first direct evidence that at least some tyrannosaurs were feathered as were most, if not all, theropod dinosaurs at some stage in their life history. Dilong’s fluffy feathers were useless for flying, but they probably kept the dinosaur warm in the cold. This suggests the small tyrannosaur was active and warm-blooded, rather than cold-blooded like modern reptiles.

While Dilong was far smaller than later tyrannosaurs like T. rex, it shared many of their characteristics, including powerful jaws and D-shaped front teeth for tearing meat from prey. Yet while T. rex was unable to use its short arms to assist with eating, it’s quite easy to imagine Dilong clutching its food while biting down.

Dilong lived with an amazing array of creatures including other dinosaurs, birds, mammals, and other reptiles like pterosaurs. The Liaoning region was probably a 'natural laboratory', like the Galapagos Islands, with high biodiversity. The area had early flowering plants and was heavily forested with rivers and streams to support the many tree-dwelling, gliding animals and other herbivores. The nearby volcanoes produced periodic ashfalls, poisonous gases and lava flows. This environment enabled incredible preservation of details on fossils - such as feathers, skin and even animals' last meals - as they were buried quickly in fine volcanic sediments.

Dilong paradoxus chased prey and roamed the lakeside forests of what is now the Liaoning Province in north-eastern China 138-129 million years ago, during the Early Cretaceous Period.

Despite having a relatively small skull compared to later tyrannosaurs, Dilong had the characteristic tyrannosaur jaw shape, fused nasal bones and closely packed, D-shaped front teeth for tearing prey. Dilong's long three-fingered hands meant it could clutch food and take it to its mouth. Prey was probably smaller animals like lizards, mammals and birds.

Dilong’s skeleton, with its long skull, slender neck, long arms and three-fingered hands, was in many ways more like those of other coelurosaurs than other tyrannosaurs. However, its legs were short for a tyrannosaur, suggesting Dilong was probably not a fast runner.

Some experts think Dilong's attributes - its small size, feathers and carnivorous diet - point to a warm-blooded metabolism similar to that of modern birds. If Dilong was indeed warm-blooded, that would be powerful evidence that at least some other dinosaurs had similar metabolisms. And at least one expert has surmised that all juvenile tyrannosaurs and other coelurosaurs, not just Dilong, may have had feathers, which most shed on reaching adulthood.

The first Dilong fossil was discovered by Chinese palaeontologist Dr Xu Xing (a research fellow at the Institute of Vertebrate Paleontology and Paleoanthropology, Beijing) in 2004, in Liaoning, China. Dr Mark Norrell of the American Museum of Natural History and Xu Xing, have worked with colleagues over many years, revealing in 2011 that several other unknown fossil specimens from the Liaoning site are in fact other Dilong specimens.

The fossils, of which at least four are known, all come from a geologic feature in north-eastern China known as the Yixian formation, which has yielded several other feathered dinosaurs.

Dilong is a member of the superfamily Tyrannosauroidea, and is yet to be placed in a family. It is most closely related to other early tyrannosauroids such as Yutyrannus. Tyrannosauroids belong to a broader, diverse group of dinosaurs known as the coelurosaurs - the same group that birds are now placed in.

With Dilong paradoxus, we can see a great example of an evolutionary transition from typical coelurosaurs to highly specialised, large tyrannosaurids such as Tyrannosaurus and Albertosaurus. In particular, Dilong's skull shares many characteristics with advanced tyrannosaurids, whereas features of its body are more like other primitive coelurosaurs. These features include relatively long forearms with three fingers, a long skull and a slender neck. 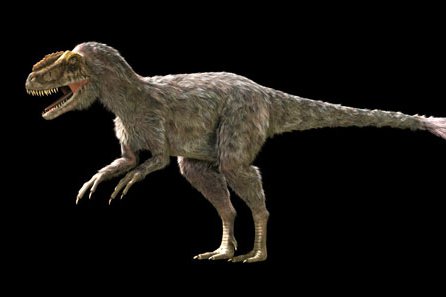 This dinosaur was the first large tyrannosaurus found with feathers. Theories include that they possibly used feathers to keep warm in cold climate.

Xiongguanlong means ‘dragon from Xiong Guan’ in Mandarin, and baimoensis is from the Mandarin for ‘white ghost’, referring to the ‘White Ghost Castle’ formation near the fossil site. This meat-eater was an early tyrannosaur that grew to about 5 metres long.