A “sensational” display of Coptic textiles and clothing from excavations at Antinoé in Egypt, was among the rich offerings at the Universal Exhibition in Paris in 1900. The art of early Egyptian Christians, mostly tapestry, captivated the audience and soon was to influence modern western art, especially through the French art movement fauvism. This dazzling display was provided by French archaeologist Albert Gayet (1856-1916) who became known as the archaeologist of Antinoé.

The city of Antinoé (Antinoöpolis), 286 km south of Cairo, was built in the 130s AD by the Roman emperor Hadrian to commemorate the premature death of his young lover Antinous. It was erected on the site near to which, as oral tradition holds, Antinous drowned in the River Nile. Old, now forgotten, relics were destroyed and building material reused except for the near temple of Ramesses II. The town was settled by Greek people from other cities, especially from the Faiyhum. They enjoyed various privileges, including the right to marry an Egyptian woman (conubium) without giving up their Greek rights and standing.

Antinoé meant to help with further assimilation of Egypt into Greek culture in which Romans were heavily imbued. And in time it developed into a significant Coptic Christian center. Several monasteries were established in the vicinity. After Arab conquest in the 7th century AD the city was renamed Ansena. It slowly declined at the end of the first millennium and eventually turned into ruins. Several buildings were still standing when the French expedition to Egypt in 1798 foreshadowed the colonial era.

Among pioneering investigators of Antinoé were Italian archaeologists from Florence and Rome as well as German and French archaeologists. Albert Gayet collected tens of thousands of textiles between 1895 and 1910. It is estimated that over 150,000 Coptic textiles from various sites, such as Akhmim, Sheikh-Shata, Deir-el-Dyk, and Dronkah, are kept in many world museums, including Cairo. But Antinoé remains an iconic site associated with Coptic garments, many of which were recovered from graves.

Opening tombs and digging up graves was rather common in the Egypt of that time, but ostentatious excavation of Christian graves was sacrilegious, except those graves belonged to then marginalized Copts in a predominantly Islamic country. The archaeologists of the late 19th and early 20th centuries uncovered a wealth of material evidence of Coptic culture, if not always adhering to ethical standards. Gayet’s methods were controversial in his time, to say the least. In contrast, a British scholar John de Monins Johnson (1882–1956) excavated several rubbish mounds along the ancient city walls in the south-western and eastern part of the ruined Antinoé in 1913-1914. With the financial support of the Egypt Exploration Fund (EEF), he searched for written sources on papyrus and was surprisingly successful in finding some in the ancient refuse dumps. Relics recovered by Johnson were distributed to institutions that held the subscription to EEF, including the Australian Museum. 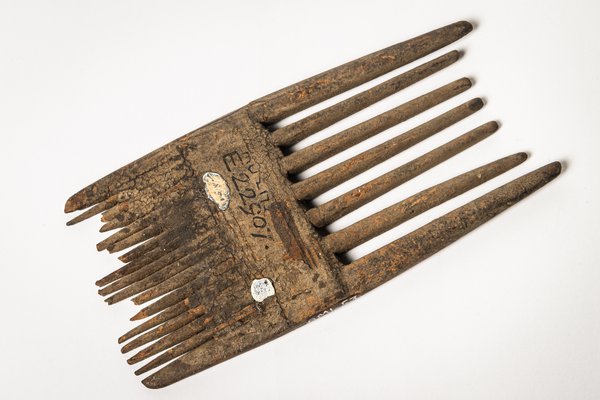 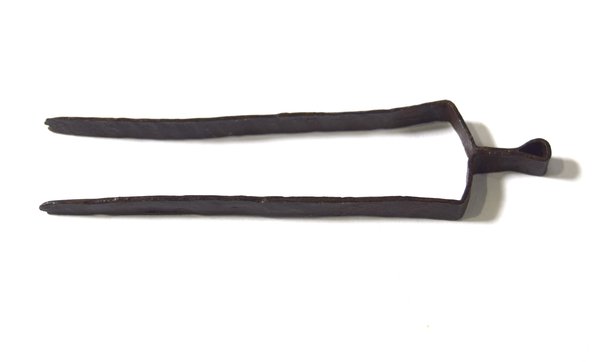 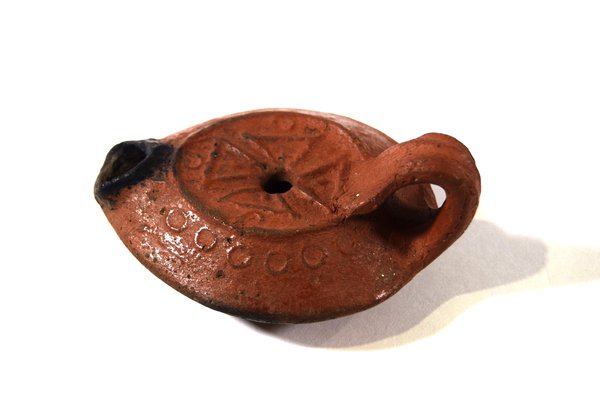 Among the finds from Antinoé are leather shoes, reed sandals, woollen socks, scissors, tweezers, needles, wooden combs, oil lamps and some fragments of fabric - clothing, furnishing and others – reflecting daily life of Coptic Christians in Greco-Roman and later history of Egypt in the 4-10 centuries AD. The fragments of fabric alone are not sufficient to reconstruct typical Coptic costume, but with knowledge derived from complete garments and ancient pictorial sources we can depict an omnipresent kind of clothing - a tunic with tapestry embellishments. The tapestry one-piece tunic was typically woven from cuff-to-cuff on a hem-to-hem loom. A slit for the neck opening was created in the middle. Then it was folded at the shoulder line and stitched at both sides. Some tunics were woven in sections and joined for completion. To finish, the tunic was decorated with cuff-bands, medallions at shoulder or knees, panels on front or back, hem bands and clavi – the vertical strips of tapestry running down the front and back of the tunic, a precursor of priestly stole. While an ordinary tunic was moderately coarse fabric, frequently linen, decorations were more refined and complex, made of wool, obtained from goat and an admix of other materials.

Decorations on a man’s tunic were typically monochrome – a subtle tonal variation, while tunics for women and children were colourful. Some tapestry pieces were reused as appliqué on other tunics. This practice explains why many decorative elements were removed from worn out garments and why some ended up in rubbish dumps. This form of clothing stayed in vogue for over a thousand years and was still in use in early medieval times. Moreover, in its general character it was pan-Mediterranean, present in Europe, Byzantium, and even Persia. It was widespread in ornamental motifs and composition as well as manufacturing techniques and use of variety of materials, including linen, wool, and even cotton and silk imported from India and China. Coptic garments also influenced the liturgical costume of Christian clergy, Catholic and Orthodox, as we know it today. 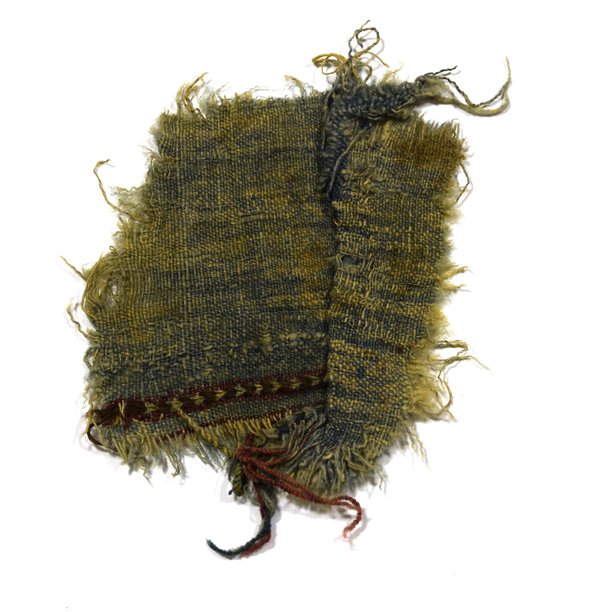 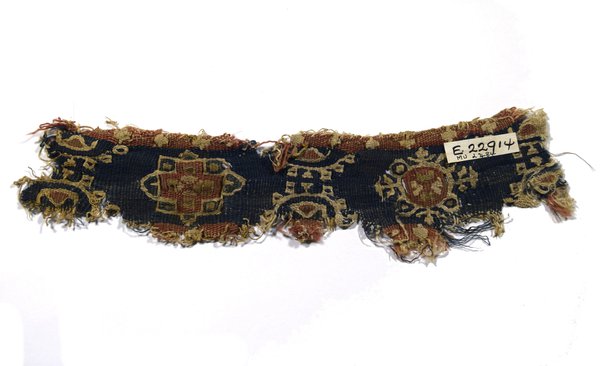 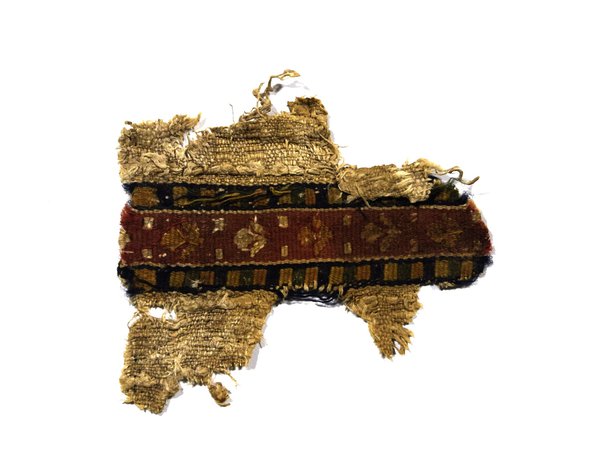 Figurative images in paintings and sculpture departed from traditional Egyptian convention and portraits often depict placid-looking people with almond-shaped eyes and wavy or curly hair. Coptic iconography is rich and complex, with a variety of floral and geometric motifs as well as figurative scenes. Among symbols is ancient Egyptian ankh which, as many scholars believe, is a precursor of the Coptic cross. Moreover, ankh appears in religious Coptic art as an impersonation of the Christian cross as late as the 6th century AD. The ancient meaning of life and its renewal associated with ankh found, it seems, perfect place in Christian ideology with the crucifixion and resurrection of Christ. Christianity and its universal symbol, the cross, sprang freshly in the first century of the Common Era, but in Egypt the cross, via its association with ankh, has a truly ancient ancestry.

In the early period of Antinoé’s prosperity, the term Copt indicated native Egyptian in contrast to Greek, Roman, Jew and others. Their language evolved directly from late Egyptian, supported by writing in a script adopted from Greek, which made literacy accessible and comparable to the common literacy practised by Romans. A competence in reading and writing contributed to the spread of Christian faith. Oppression of early Christians compelled them to seek refuge away from urban centres and solidified the bonds between language, script, religion, and identity. Like the early Christians in Rome who sought refuge in underground catacombs, their Egyptian brothers sometimes sheltered their congregations in ancient tombs. After the Edict of Milan in 313 AD effectively ended persecution of Christians, most Egyptians joined the Coptic Church (Church of Alexandria) which flourished, especially in Egypt, but also in neighbouring regions of north Africa. After the Muslim conquest (639-646), the term Copt became specific to Egyptian Christians.

Greek influence and presence in the form of colony-settlements, mercenaries and even curious visitors predate the conquest of Egypt by Alexander the Great (332 BCE) and its legacy, the Ptolemaic Dynasty (305 BCE – 30 AD). It seems it was the influence of Greek culture that helped to transform Egypt from its pharaonic antiquity into the Christian era. Coptic language, a direct offspring of late ancient Egyptian language, faded away from daily life in dominant Arabic Egypt, but is still preserved and used in Coptic liturgy. But there is an interesting twist: the Greek script was inspired by and evolved from Egyptian script, via the Phoenician route.

I wish to thank Glenda Susan Marsh-Letts who researched fragments of textile in our collection and who generously shared her extensive knowledge on ancient fabric.

Coetzee, Derick. ND. The Ankh and the Coptic Cross.

Late Paleolithic and Early Neolithic periods in Primorye: Problems of origin and intercommunication of ancient cultures

Ancient Cultures of the Primorye in the Late Pleistocene and Early Holocene. Origin and Adaptations