At a metre-and-a-half wide and almost a metre long, with its intricate feather detailing and vibrant colours, the garment referred to as “Cook’s cape” is a commanding presence in the 200 Treasures of the Australian Museum exhibition. The 'ahu'ula – a ceremonial cape of a prominent chief – was one of several cloaks and capes gifted by King Kalani’opu’u to Captain James Cook upon his arrival at Kealakekua Bay in January 1778.

The arrival of the ship was a momentous occasion for the people of the islands. Exactly how these newcomers were interpreted has been a matter of much debate. Some scholars have suggested that because of the timing being the season of Makahiki, the way Cook’s ship approached the island in a clockwise direction and appeared ‘draped’ in white cloth, that it echoed key features of the processions made for the god Lono – the god of prosperity, fertility and bountiful harvests.

Whatever the case, Cook was greeted with the warmth and ceremony common in the eastern Pacific at the time: the presentation of strategic, high-status gifts. Kalani’opu’u and other chiefs gifted Cook this cape with other capes and artefacts that belonged to them to establish proper, and beneficial, relationships. This reception was repeated as Cook took trips from island to island, collecting and trading for food and fresh water for the crew.

After his death in 1779, the large collection of artefacts Cook had amassed on the islands was sent back to London. The 'ahu'ula was among the 184 objects retained by Cook’s widow, Elizabeth, and sold to an Australian Museum agent in 1894.

Named one of the museum’s most priceless and significant objects, the cape went on display in 200 Treasures in October 2017. Now, after 10 months of exposure to low light in the gallery, it is due for a rest in the dark of the AM Pacific Collection storeroom. In order for the display to continue unexpurgated, Hawaiian master craftsman Rick Makanaaloha Kia'imeaokekanaka San Nicolas was commissioned to create a replica. 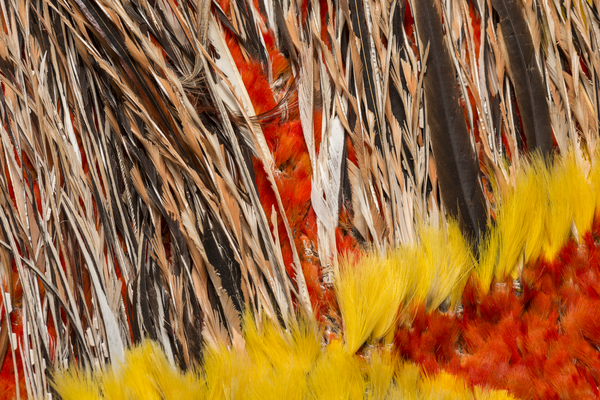 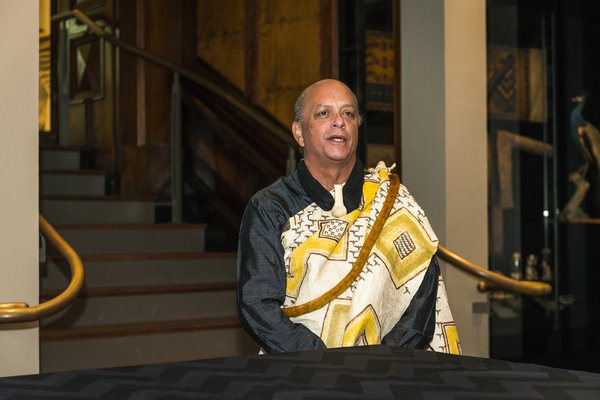 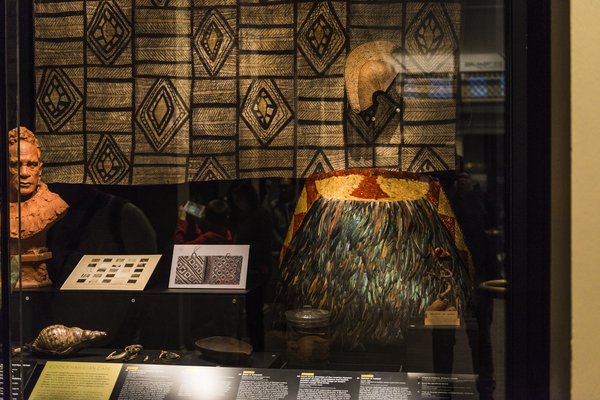 Rick says his main aim with the replica was to make it as similar as he could with the materials available today, and to use the closest possible method to the way that they were traditionally made.

“You wouldn’t be able to achieve an exact look because the feathers used on the original are no longer to be used,” he says. “The colours are all the closest I could match to the native Hawaiian birds that were used then, they’re not dyed, they’re all natural feathers. I used pheasant feathers in place of the honeycreepers that were used in the original, and the long feathers are rooster tails – in some cases rooster tail feathers were used post-contact – but that’s what I’m trying to do, to get the main colours and closest look that we can get.”

Many of the birds used in the original cape are now endangered.

“These are feathers from the Hawaiian Seabird [red-tailed tropic bird, kaua‘e ‘ula] . As these birds only have two tail feathers, many hundreds of birds would have gone into the creation of the original cape. You might be able to collect some feathers along the beach, but it’s a very long process. And even if I did all of that as I do have a license, I still wouldn’t be able to bring those feathers into Australia because it’s an endangered bird. So I was aiming to stay true to the style of the cape by using rooster feathers.”

During the 360 hours it took to complete the traditional process of attaching the hundreds of feathers to the supporting netting, Rick contemplated the rich history of the cape and the king who once wore it.

“I have a photo of the original cape pinned up in front of me. As I’m tying the bundles and putting them on to the netting, I’m thinking about this piece of old Hawaii that was created hundreds of years ago, about the people it was made for and King Kalani’opu’u. It gives you a smile on your face to know that you’re making something that he would have worn at that time. It’s always pleasant thoughts and memories when I’m doing a piece like this.”

On a specimen of Crex crex, shot at Randwick, New South Wales

Sharks are ancient creatures that evolved long before dinosaurs lived on land. They have survived five global mass extinctions, each of which wiped out more than 75 per cent of animal species.

Rattling Nursery Frog is a small species of frog found only in McIlwraith Range in Queensland.

The Longgu community time capsule: contemporary collecting in Solomon Islands for the Australian Museum. In From Field to Museum—Studies from Melanesia in Honour of Robin Torrence, ed. Jim Specht, Val Attenbrow, and Jim Allen

A fascinating collection of original watercolours by a talented female natural history artist.

Illustrations of objects from Captain Cook’s voyages
View collection
Back to top
You have reached the end of the page. Thank you for reading.