For centuries, the sunfish (from the family Molidae) has attracted interest because of their unique shape and large size. These beautiful giants of the sea can grow to more than 3m in length and weigh over 2,000kg. Sunfishes are found worldwide in the open ocean of tropical and temperate seas. These interesting fish are completely without a caudal fin, and instead are replaced by a ‘clavus’, which in Latin means ‘rudder’.

The clavus is one of the morphological features that scientists use to differentiate among species. The classification of the species from the genus Mola has long been confused, despite the large amount of interest these fishes create. This is mainly due to their rare occurrence to scientists, and difficulties in preserving them for research.

Despite these difficulties, in 2018 Dr Etsuro Sawai, Dr Yusuke Yamanoue, Dr Marianne Nyegaard and Dr Yoichi Sakai published their findings on the adult Mola species worldwide. This involved the researchers painstakingly following the trail of many specimens, within many museums, worldwide. The result of their dedicated work confirmed the existence of three species of sunfish, all three of which are found in Australian waters: the Bump-head Sunfish, Mola alexandrini (previously known as Mola ramsayi); the Ocean Sunfish, Mola mola; and, the Hoodwinker Sunfish, Mola tecta – which has only been described in 2017! They used a number of characteristics to distinguish the species, and one of the criteria used was the clavus (wavy or lobed in Mola mola, rounded in Mola alexandrini and rounded with an indent in Mola tecta). So, the adult Mola specimens has been revised, but what do we know of the life history of these amazing animals?

The fact is that we know very little about the early life history of these fishes, as larvae are rarely seen. However, during 2017 the Australian marine research vessel the RV Investigator (operated by CSIRO) collected several of these larval Mola specimens off the New South Wales coast, and in late 2019 these little babies came to the attention of sunfish expert, Dr Marianne Nyegaard. Marianne, who is currently a Research Fellow at the Auckland War Memorial Museum, was extremely interested to know what species these larval specimens are. Unfortunately, none of the features used to describe the adults are relevant or visible in larval specimens, so how do we know which one of the three species it will grow up to be?

This is where Andrew King from the Australian Museum Research Institute's Australian Centre for Wildlife Genomics came to the rescue. Fortunately, one specimen (I. 49412-001) from the RV Investigator field collections was preserved in alcohol, which meant it could be used for DNA analysis. To minimize damage to the larval specimen, Andrew extracted DNA from a single eyeball. He used PCR primers designed by Sagara et al in 2005 to amplify the mitochondrial D-loop region and this DNA sequence; this was compared to reference data generated by Nyegaard et al in 2018.

This shows a small part of the sequence from the unknown larval sunfish sequence (highlighted in yellow) compared to other reference samples. The vertical coloured bars show where the genetic code is different to the two other species. These differences are analysed statistically to identify the correct species.

A clear match from the sequence was identified with samples from an adult Bump-head Sunfish (Mola alexandrini), thus making this little guy the first ever genetically identified Mola alexandrini larva anywhere in the world!

The identification of this larval sunfish is an exciting discovery in the world of sunfishes. While Andrew was carefully identifying the specimen from the RV investigator, Dr Tony Miskiewiz, a Research Associate of the Ichthyology collection at the Australian Museum, has identified more larval Mola specimens in the Ichthyology collection. These specimens (shown below) will be studied by Marianne and her colleagues and will be crucial in their research examining the early life history of the three Mola species in Australia. 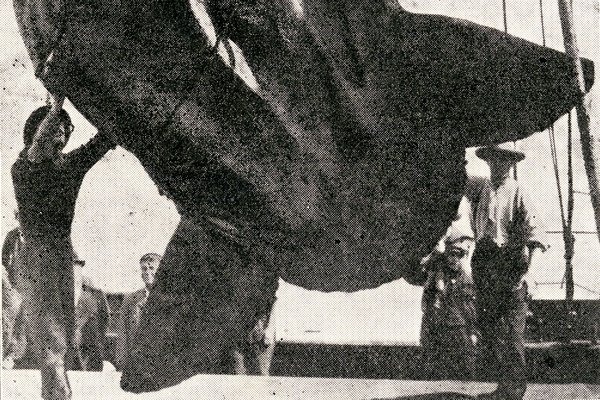 Discover more about the molid fishes on the site.