Sea scorpions (more formally known as eurypterids) are extinct arthropods, related to insects, crustaceans, spiders and horseshoe crabs. Despite most modern arthropods being relatively small, eurypterids include some of the largest species to have ever existed, some reaching over 2.5 metres in length! While they have a global distribution, most named species are only known from the northern Hemisphere. Australian species, by comparison, have received relatively little attention. Yet, a recent review of all eurypterid fossils in Australian collections has revealed a rich diversity of sea scorpions belonging to the family Pterygotidae, mostly from the state of Victoria.

Approximately a year ago, Dr Russell Bicknell—a postdoctoral researcher at the University of New England—asked if there were any eurypterid specimens in the collections at the Australian Museum. I answered, “Yes, but most are from overseas. We only have a few specimens for Australia coming from near Cootamundra in NSW”. This got us both thinking about Australian eurypterids, and how little study has been done on this rather enigmatic group.

We were interested to see what material existed in other museum collections around Australia. So, we contacted the Western Australian Museum, Queensland Museum, South Australian Museum, Melbourne Museum and Geoscience Australia. What we found was a goldmine of specimens, particularly in Victoria and southern New South Wales; some of which had never been featured in the scientific literature.

All up, we found there were possibly seven groups known from Australia. These were all from a period of time approximately 432–390 million years ago (Late Silurian–Middle Devonian). Six of these were found in Victoria and New South Wales, and all from the superfamily Pterygotoidea. This superfamily was one of the largest families of eurypterids, in terms of overall body size. At least four species internationally are known to have ranged over 2 m in length.

The reason why these southern Australian species belong to the Pterygotoidea might have to do with the superfamily’s strong ability to swim. Previous studies have suggested that eurypterids originated around Avalonia, Laurentia and Baltica (mostly modern-day North America and western Europe). These older species were generally small and all crawled across the sea floor. Later groups, however, evolved to achieve a truly active swimming lifestyle (typically termed “pelagic”). It was these families that dispersed towards distant places such as Gondwana (which included modern-day Australia). Members of the Pterygotoidea were particularly good swimmers owing to their elongate, paddle-like posterior swimming appendages and rudder-like tails, giving them an almost rowboat-like appearance.

The only other species known from the continent come from the famous Gogo Formation in Western Australian. This species belongs to the Adelophthalmidae, which is closely related to the Pterygotoidea. This meant they were also active swimmers, likely having made their way to Australia from elsewhere. Whilst our study did not find any new species of eurypterid, we suggested that collecting from Early Devonian (419.2–393.3 million-year-old) rocks around Melbourne may be the most prospective future target for further research.

Importantly, this study highlights the usefulness of museum collections in scientific research, acting as a repository of rare and frequently overlooked species. Typically, however, the more we find out about these rare groups of fossils, the more we realise that the information we’ve gleaned is just the tip of the proverbial iceberg.

This piece was inspired by the recent article in the conversation by Dr Russell Bicknell. For more information see: https://theconversation.com/giant-sea-scorpions-were-the-underwater-titans-of-prehistoric-australia-141290?utm_source=facebook&utm_medium=bylinefacebookbutton&fbclid=IwAR3LfoonjGnkc1ZxSqOQtp7PbK3lO_rXkg_Omc8HxUG4vuV3Y9OmXclPxl0

Black Rock Scorpions are a redish brown or dark brown in colour (but can also be a yellowish brown). They are smaller than other species in the Urodacus genus.

Scorpions are common arachnids found in gardens and forests throughout Australia. 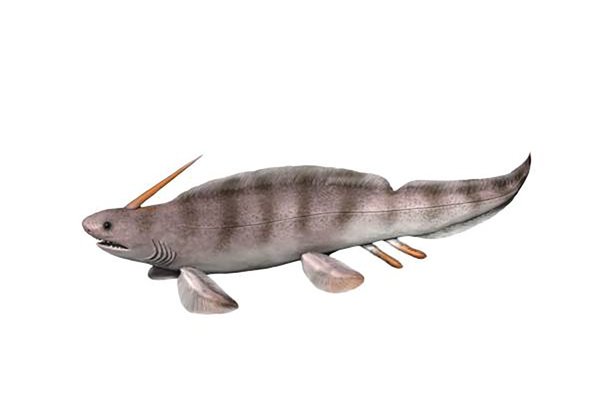 The Xenacanthus is a genus of prehistoric sharks.

Modelling prehistoric social interaction in the south-western Pacific: a view from the obsidian sources in northern Vanuatu. In From Field to Museum—Studies from Melanesia in Honour of Robin Torrence, ed. Jim Specht, Val Attenbrow, and Jim Allen