Flying there was just as I expected: beautiful panoramas of jewel-coloured ocean with reefs and islands scattered throughout.

As an undergraduate intern, I am lucky enough to be spending two months at LIRS, 30 km from Cooktown on the northern end of the Great Barrier Reef.

While at LIRS, I hope to learn more about the practical side of research. During my studies (Bachelor of Marine Science and Management, at Southern Cross University in NSW), I have had a brief introduction to some research methods. At LIRS, I am exposed to all sorts of interesting research involving fascinating (and sometimes very complicated) methods and equipment.

I hope that by the time I leave, I will have accumulated considerable knowledge and experience, which will be useful in my future career as a marine scientist.

My current sojourn on Lizard Island is actually the final task I need to complete my degree, which I’m doing as a mature-age student. Just before I left home, I submitted my last assignment and when I return home in March, I will immediately become immersed in my Honours work.

Interestingly, the last unit of study I completed was ‘Coral Reefs on the Edge’ and included a week-long field trip to Heron Island, near the southern end of the Great Barrier Reef.

Arriving at the airstrip was reminiscent of many others I’ve visited – we could have been at any small airport in Australia. That impression lasted until I was met by the friendly, smiling Cassy in the LIRS ‘airport shuttle’ and I knew I was somewhere special.

Coming from the mid-north coast of NSW, I welcomed the icy airconditioning in the Landcruiser for the 2 km drive to the research station – I haven’t yet acclimatised to the Far North Queensland heat.

Because I had been busy with study, I’d had little time prior to arrival, to learn about LIRS so almost everything has been a surprise, starting with the steep sandy hill Cassy negotiated with great aplomb. I was very impressed with her driving skills. Little did I know that I would be driving the very same route less than 24 hours later, welcoming another plane-load of researchers to the island.

Stunning glimpses of the Pacific Ocean from the track were tantalising and little islands appeared to be strewn like pebbles, all over the reef. Wildlife aplenty was also seen, starting with the ubiquitous monitor lizards for which Lieutenant James Cook named the island, ambling across our path frequently.

Pheasant coucals, white egrets and small pigeons also made appearances that first afternoon. Green ants, common to this region of Queensland, are also found in great numbers on Lizard Island and kitchen middens beside the track are a testament to the traditional owners of the land here – the Dingaal people who visited from the mainland for thousands of years.

After a magnificent sunset over the ocean, more wildlife appeared in the form of geckos; dozens of them all over the verandah of our house, chasing insects attracted to the lights. A resident huntsman keeps the insects to a manageable level in the bathroom although the cicadas are a little large for him.

Easy access to photos and information about the enormous diversity of life on the northern Great Barrier Reef for your mobile device or desktop. 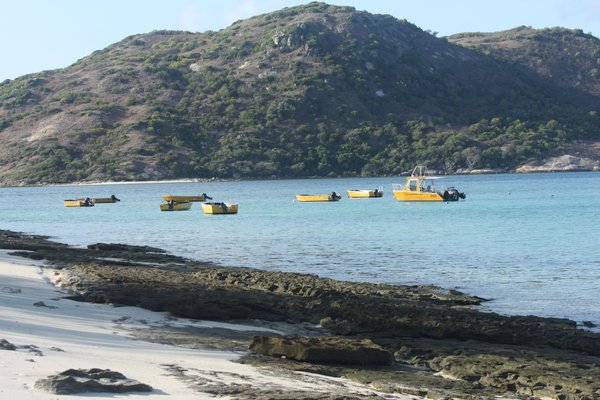 There is no medical doctor stationed on Lizard Island, but Lizard Island Research Station has highly qualified first aiders with access to medical equipment, supplies and advice for emergencies.