Beachcombers Adrian and Sally Diamond retrieved the object from "the shallows, about a foot back from the shore line".  They stated that "in the water it was glistening a tan and golden colour." They had no idea what it was; nor did other people they spoke with.

Images were sent to Australian Museum. We recognized it as a tooth plate from a Southern Eagle Ray, Myliobatis australis. The plate was found between Scottish Rocks and Hole-In-The-Wall, Booderee National Park, Jervis Bay on 24 May 2014.

Eagle Rays have two tooth plates in their mouths. The smooth, hard surfaces are used to crush food items, which include crabs, molluscs, annelid worms and teleost fishes.

Last and Stevens (2009) state that the "Teeth [of the Southern Eagle Ray are] plate-like, mostly with 7 rows in each jaw (outer rows sometimes concealed or reduced); central row very broad, each tooth more than 5 times wider than those adjacent.

In Australia, the Southern Eagle Ray occurs in temperate and sub-tropical marine waters.  The species has a wide distribution but the tooth plates are not commonly encountered, so thank you Adrian and Sally for sharing your find. 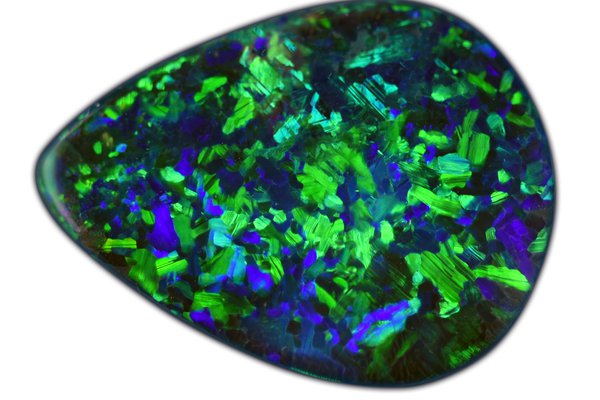 Australian black opal is the most prized and most valuable type of precious opal.

Stagonopleura guttata
Discover more
Back to top
You have reached the end of the page. Thank you for reading.