In some parts of Papua New Guinea, particularly throughout the Highlands, the string bag or bilum is woven into all aspects of cultural life.

Bilum, an ancient twisting and looping technique using woven plant fibres, is used to make traditional bags that carry everything from food supplies to babies slung over their mothers’ backs, and for ceremonial dancing, body adornments and sorcery.

From these traditional roots, the aesthetic and cultural values of the bilum are changing, thanks to imported fibres such as wool, acrylic, plastic and nylon. The technique is even finding its way into fashion garments and homewares.

One of the leading bilum wear designers is Florence Kamel of the Bilum Weavers Association based in Goroka, in PNG's Eastern Highlands Province. Florence is one of many Pacific artists who come to Sydney to display their brightly coloured artworks at Maketi Ples, a contemporary art exhibition and ‘market place’ held in the heart of Sydney’s art world, Woollahara. 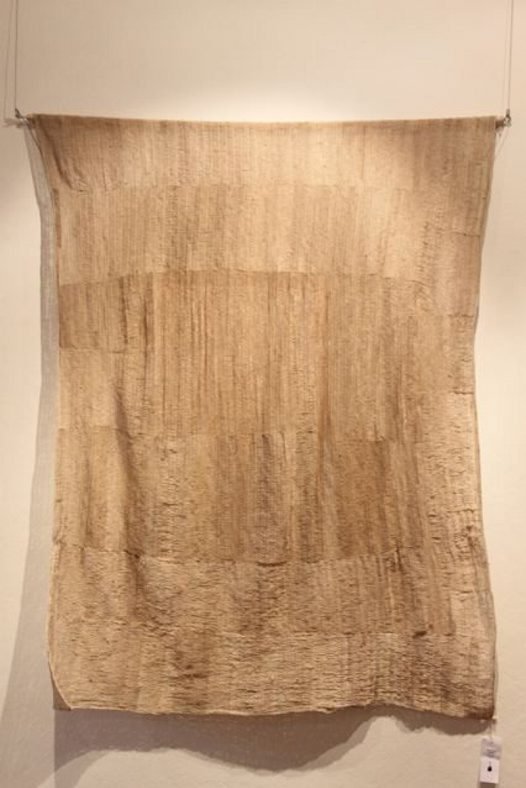 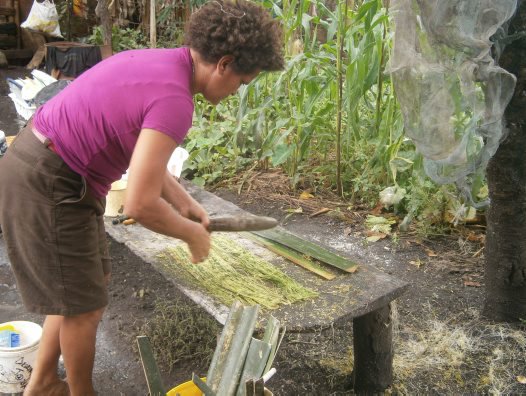 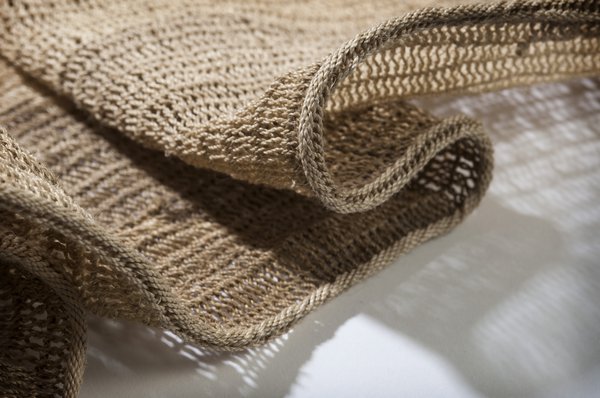 Cultural staff from the Museum’s Pacific section have supported Maketi Ples since it began in 2011, not just to acquire new artworks, but to attend workshops and document the perspectives of the artists. In February this year, we were fortunate to secure two artworks which had immediately attracted our attention for their stunning simplicity and unique aesthetics.

The first of these is called Lepa bilum, a beautiful white to yellowish wall hanging made using natural fibre with no added colourings. What makes this piece so beautiful is the stunning natural colour variation of the fibre and its texture. It was created using sisal fibre from a local plant, the succulent Agave sisalana. This fibre is coarse, strong, durable and elastic. Working with sisal, however, is a challenging process owing to the burning acidic juices released from the fibres. To process them, women place bundles of sisal on busy roads and let the cars run over the bundles for a while to squeeze out the juices. The fibres are then scraped with a knife and twisted, with the workers having to cover their arms and legs to avoid being burned. Understandably, this time-consuming and unpleasant process often makes local women reluctant to work with sisal.

Lepa bilum was commissioned by Pacific Islands Trade & Invest as a one-off piece at the personal request of the Pacific Trade Commissioner. In producing it, Florence enrolled some of the best local women specialists for its construction. The job of twisting the fibres was given to Vanessa Jones from Kama in the Goroka vicinity, who produced up to eight pieces of fibre, each two metres in length, per day. A total of ten women worked on this stunning and unique artwork, which took three weeks to make, from collecting the fibre, cleaning and twisting to looping.

Florence’s second piece is a bilum basket based on a frame which she purchased during a trip to Melbourne for the 2006 Commonwealth Games. Florence travelled as part of the PNG contingent having been commissioned to create the official uniforms of bilum dresses and neckties for the PNG athletes.

While on a shopping trip in Kmart, she saw a large vase-shaped frame covered in banana fibre, purchased it and took it home with her. With assistance from another artist from Kama, Hella Bikukure, she recycled the covering and used the same bilum looping technique to weave this impressive sculpture.

Florence is continuing to create further contemporary bilum artworks, but these two pieces are the first major experimental examples of bilum homeware and are important acquisitions for the Museum’s collection.

An initiative of Pacific Islands Trade & Invest, the Maketi Ples festival is attracting growing interest from an Australian public who come to meet the artists and directly acquire their works (incidentally providing an important source of income for the artists and their families).

While they’re visiting Sydney, we organise for the artists to view and interact with the Museum’s Pacific cultural collections, which has proven to be a source of inspiration for several future artworks.

We are looking forward to seeing more contemporary works inspired by the Museum’s Pacific collections at the next Maketi Ples, to be held in February 2015.

Delve into amphibian conservation in South Asia, celebrate 25 years of Australian Museum Eureka Prizes and discover life among the Aztecs in this edition of Explore.