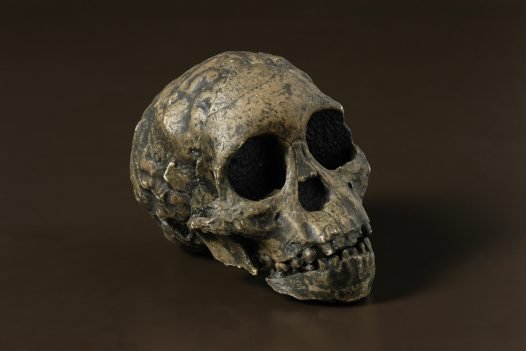 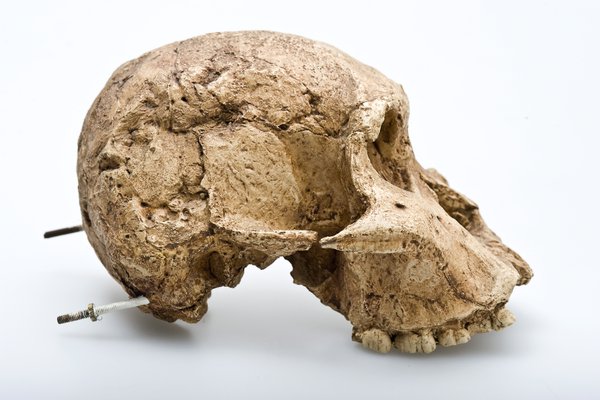 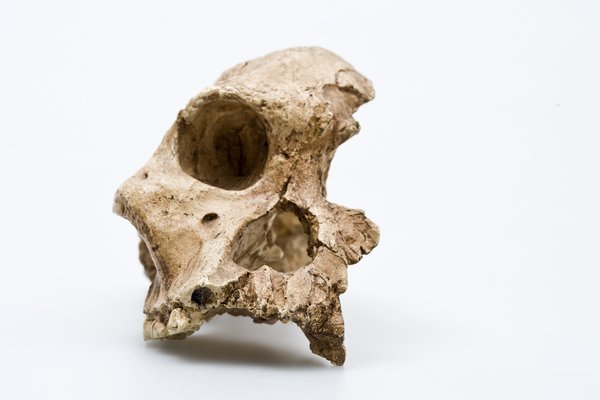 This species lived between 3.2 and 2 million years ago.

In 1924, a fossil was rescued from a limestone quarry at Taung in South Africa and sent to Australian, Raymond Dart who was a Professor of Anatomy in nearby Johannesburg. The now-famous Taung Child skull had a mixture of human-like and ape-like features. Dart believed it to be an early ancestor of humans and in 1925 he gave his ‘man-ape’ a new species name, Australopithecus africanus.

Dart had difficulty convincing other scientists that this was a human ancestor, partly because at the time, many believed human ancestors had large brains and ape-like jaws whereas the Taung Child had the opposite set of features. Acceptance only arose in the late 1940s after Robert Broom’s discoveries of more fossils including those of adults. Since then, many hundreds of Australopithecus africanus fossils have been found in South Africa.

Fossils from two individuals were recovered in 2008 and announced as a new species Australopithecus sediba in 2010. More fossils are in the process of being excavated. Many other palaeontologists consider the ‘A. sediba’ fossils to be a chronospecies of A. africanus – meaning that the slight anatomical differences between the new fossils and A. africanus are due to changes over time within a species rather than them being from different species. This view makes the fossils merely an interesting side branch of our family tree but does extend the time range for A. africanus by almost half a million years

Key specimens are the type specimen Malapa Hominin 1 (MH1), which is considered to be a juvenile and is represented by a partial cranium (UW 88-50), partial lower jaw (UW88-8) and postcranial elements including a right clavicle (UW 88-1); and Malapa Hominin 2 (MH2), a probable female adult represented by partial lower jaw (UW 88-54), isolated teeth from the lower jaw (UW 88-54) and some partial postcranial elements including most of the right arm, ankle and knee joints and bits of the pelvis and shoulder blade. MH2 is the species paratype (a specimen other than a type specimen that is used for the original description of a taxonomic group).

Australopithecus, means ‘southern ape’. It is based on ‘australo’, a Latin word meaning ‘southern’ and ‘pithecus’, a Greek word meaning ‘ape’. The name was originally created just for this species found in South Africa but several closely related species now share the same genus name.

The word africanus is a Latinised form of the word ‘Africa’ and indicates the continent where this species was found.

Australopithecus africanus was once considered to be a direct ancestor of modern humans but new finds have challenged this position. Many scientists now believe this species represents a side branch in our evolutionary family tree but there is disagreement about its exact relationship to other species.

Fossils discovered in Malapa, South Africa, in 2008 were announced as a new species Australopithecus sediba in 2010, but many other palaeontologists consider the fossils to be a chronospecies of A. africanus – meaning that the slight anatomical differences between the new fossils and A. africanus are due to changes over time within a species rather than them being from different species. This would extend the time range for A. africanus by almost half a million years.

The dental arcade is the shape made by the rows of teeth in the upper jaw. This illustration shows the difference between the dental arcade of an ape, Australopithecus africanus and modern human, Homo sapiens.

This species probably used simple tools such as sticks found in the immediate surroundings and scavenged animal bones. Stones may also have been used as tools, however, there is no evidence that these stones were shaped or modified.

Analysis of tooth wear patterns suggests that Australopithecus africanus had a diet that included fruit and leaves. Chemical analysis of the teeth also suggests that some meat was included in the diet but not in significant amounts. It is likely that they may have scavenged for meat rather than hunted.