Frogs from throughout Southeast Asia that look like bird poo are currently considered a single species, Theloderma asperum, because they all look very similar. However, DNA has revealed hidden diversity within T. asperum, with multiple species of undescribed frog species. This finding has important conservation implications.

When is it good to look like poo? When it just might save your life! One strategy to avoid being eaten by a predator is to look completely unappetizing. Apparently for a few species this is a tactic that has worked very well. By appearing totally inedible, animals can avoid capture and perhaps even increase their odds of capturing prey who misidentify them as harmless For example the orb-web spider Cyclosa ginnagadecorates its web to specifically masquerade as bird faeces and gain protection from predation. A small tree frog within the family Rhacophoridae appears to also have adapted this strategy. Theloderma asperum is found widely throughout Southeast Asia and its brown-and-white splatter coloration looks very similar to bird poo - which is why it is colloquially referred to as the “bird poo frog”. 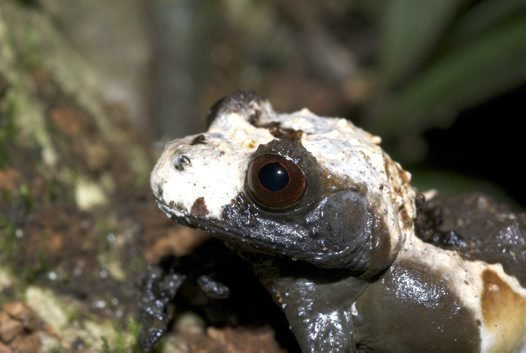 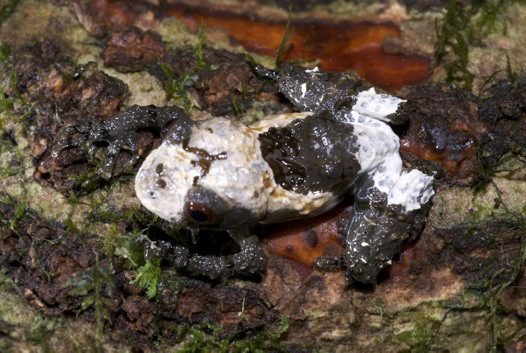 First described in 1886, little is known about this species. It is rarely observed in the wild. However thanks to recent expeditions to Laos, Myanmar and Vietnam, several specimens have been collected along with tissues for DNA sampling. Having DNA plus voucher specimens to look over allows us to see how much diversity truly exists among these frogs. This is exactly what AMRI’s Jodi Rowley and I have set out to do.

To look at, T. asperum frogs from all throughout Southeast Asia appear nearly identical. A series of measurements have been taken on several adult frogs collected from Laos, Myanmar, Thailand and Vietnam. Yet, our preliminary analysis of one genetic marker (the 16s gene) strongly supports that this species is actually made up of multiple species that are visually nearly indistinguishable from one another. Apparently looking like poo is so helpful for these frogs that selection has worked its wondrous way of maintaining this appearance for many species in the T. asperumcomplex.

We are currently sequencing five more genes from these frogs for a total of 2,400 base pairs of DNA that can be used to compare each T. asperum and their closest relatives. Not only interesting from a ‘poo’ point of view, our findings will be useful from a conservation standpoint too.

To date T. asperum is thought to occur all throughout Southeast Asia and is therefore not prioritised in conservation decisions. Our data suggests that T. asperum is actually several species with much smaller distributions and therefore under greater threat of extinction. It just so happens that the locations from which these frogs have been collected are some of the most human-impacted regions in the world. Proper identification of species is the foundation of conservation and hopefully these frogs won’t be lost before it’s too late.

8 October 2020
Read more
Back to top
You have reached the end of the page. Thank you for reading.