As the date of the Lord Howe Island rodent eradication draws nearer, we have assessed the status of the islands endangered land snails.

Dangling from a rope 800 m above sea level, with a sheer rock face above and a dizzying drop below, is a novel (but highly recommended) way to view the stunning landscape of Lord Howe Island. Then, once you’ve dragged yourself up the last stretch to the summit and rested your jelly-like legs, an another amazing sight awaits you: the lush cloud forest that clothes the summit of Mt Gower, the highest peak on Lord Howe Island. This is a snail’s paradise: moist, green, and covered with palms, ferns and mosses. Last week we made this arduous but picturesque climb to check up on some critically endangered endemic land snails which are only found here.

Lord Howe Island, a small, crescent-shaped volcanic island measuring about 15 km2, lies in the Tasman Sea about 700 km from Sydney. It is dominated by two large basalt peaks in the south, Mt Gower (875 m) and Mt Lidgbird (777 m), and has small hills of up to 200 m in the north. Despite its age of only 6-7 million years, the island is home to 59 endemic land snail species, with another 37 potentially undescribed species identified in the collections of the Australian Museum. However, this remarkable diversity has been significantly impacted through predation by introduced species. These include mice, introduced in the 1850s, rats, which arrived in 1918, and the European blackbird and song thrush, which were brought to the island in the 1940s. At least two endemic snails are believed to be extinct, and five species or subspecies are listed under the EPBC Act as Endangered or Critically Endangered.

However, the good news is that after many years of discussion and planning, a comprehensive rodent eradication is planned for 2017. In order for this to go ahead, it was necessary to survey the listed land snail species and assess the possible threat of rat baiting on the health of these tiny populations. The listed species include the Magnificent Helicarionid Land Snail (Gudeoconcha sophiae magnifica), three tiny leaf-litter dwelling charopids (Whitelegge’s Pinwheel, Mount Lidgbird Pinwheel and Slug-like Pinwheel Snail), and the Lord Howe Flax-snail (Placostylus bivaricosus). Three of the five species were only known from the slopes of Mt Gower and Mt Lidgbird. So the day after our arrival on Lord Howe Island, we shouldered our packs and set off on the climb. We had received special permission to spend the night on top of the mountain in order to maximize our searching time. 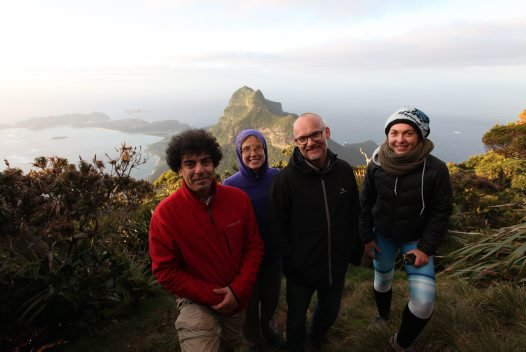 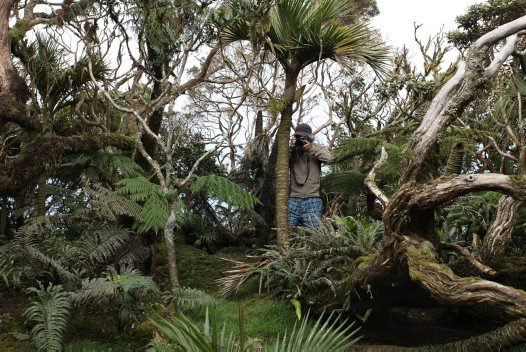 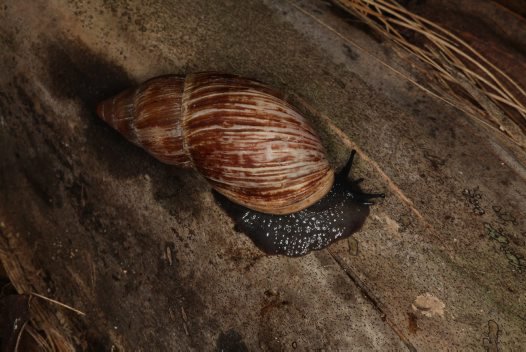 While on the summit, we found two live specimens of Whitelegge’s Pinwheel Snail and a single live specimen of the Slug-like Pinwheel Snail. On our way back down later that day, we found the third charopid species, the Mount Lidgbird Pinwheel Snail, at the saddle between the two mountains. It was fantastic to see that populations of these tiny snails are still persisting, although in very low numbers. Sadly, we failed to find any trace of G. sophiae magnifica. Nevertheless , even with an overnight stay, there were areas of the summit that we didn’t reach, so we hope that the next trip will allow us to continue the search.

The fifth listed species, P. bivaricosus, we observed crawling in leaf litter at night in Old Settlement, as we surveyed the lowland areas of the island. Our observations of the native land snails led us to conclude that the majority of species are at low risk of coming into contact with rat baits, due to their tiny size and low mobility or arboreal nature. There are four larger ground-dwelling species that are at greater risk of exposure; for these species, we recommended baiting trials and the collection of insurance populations to be maintained in captivity for the duration of the baiting program.

The land snail fauna of Lord Howe Island shows extraordinary diversity in only 6 million years of evolution. The study of these species allows us unique insights into both biogeography and evolution, but more importantly, they also make up a vital part of a delicate ecosystem where any loss can have far-reaching and unpredictable effects. We hope that the endemic land snails of Lord Howe Island are going to recover after the successful eradication of introduced rodents.

During the mid-1960’s the woodhen was one of the most endangered birds in the world, but with a successful breeding program and other conservation programs it has been brought back from the brink of extinction.