John William Roach rose to notoriety as the perpetrator of one of the oddest frauds committed in early Sydney’s colourful catalogue of criminal misdemeanours.

In 1846, styling himself as the ‘Curator of the Australian Museum’ he boarded a steam boat just arrived from Moreton Bay and removed to his own taxidermy premises in Hunter St, the foetus of a dugong or ‘Sea Pig’ – clearly addressed to the ‘Australian Museum’.

When the audacious theft was discovered the Museum was in uproar. The real Museum Curator at the time, William Sheridan Wall, was sent to retrieve the valuable specimen which he returned to the Museum and put the matter in the ‘Law Officer’s’ hands. Luckily for Roach, a prosecution it seems was not proceeded with.

John Roach had in fact been one of the earliest employees of the ‘Australian Museum’. Back in 1834, Edward Deas Thomson, Clerk of the Legislative Council was administrative head of the Museum following the death of its first Curator William Holmes. In a letter Thomson sent to the Colonial Secretary that year, he suggested not only ‘that the Institution be called the “Australian Museum” but that a convict ‘John Roach’ be employed ‘in preserving the birds and other Curiosities in the Museum’ and that he be allowed to ‘set them up, and place them in the Cases, in which he appears to be expert’.

John Roach’s name first appears in a list of male convicts that arrived in Sydney in 1833 on board the ‘Aurora’. His occupation is described as ‘bird stuffer’ and his offence as ‘stealing a coat’. With bird stuffing skills obviously in high demand Roach was snapped up by Deas Thomson and attached to Surveyor-General Thomas Mitchell’s expedition to inland south-eastern Australia in 1836.

As ‘collector and preserver’ of specimens on behalf of the Museum, Roach seems to have been ruthlessly efficient. Mitchell’s assistant surveyor Granville Stapylton wrote, ‘The scoundrel Bird stuffer takes the greatest pains to conceal everything new from my sight. The collection for the Museum is already very extensive.’

After receiving a ticket-of-leave, Roach left the employ of the Museum in 1840 and set up shop at 32 Hunter St, Sydney. Successfully advertising his services as a taxidermist, it was noted by a visitor that, ‘One can, at Roach’s, have the pleasure of seeing in a short time a sample of the animals that are found in New South Wales.’ Happily though the ‘Sea Pig’ was not to be one of them. 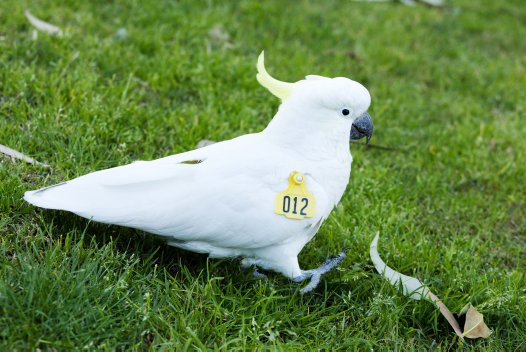 Despite their reputation as urban hooligans, Cockatoos seldom vandalised their tags, allowing citizen scientists to study 100% of birds.

180 years of stuff[ed] birds: Ornithology at the Australian Museum, Sydney.

Bird illustrations
Contributions to science
Discover more
Back to top
You have reached the end of the page. Thank you for reading.