One of the best known Bird-dropping Spiders is Celaenia excavata. Other names for this spider are the Death's Head Spider, as its markings can also resemble the shape of a skull, and the Orchard Spider, because it is often seen on fruit trees where moths, its main source of food, may be abundant.

Its large size, distinctive colour pattern and resting posture all make this dung mimicking spider hard to mistake. The abdomen is broad and triangular in shape, concave along midline, and has a pair of roughened humps towards the rear. The legs are usually held folded against body.

Where do Bird-dropping Spiders live?

The Bird-dropping Spider is found throughout much of eastern and southern Australia and have even been recorded from Uluru in central Australia. They are moderately common in suburban gardens but often overlooked.

What do Bird-dropping Spiders eat and how do they mate?

Like its relatives the Bolas Spiders, The Bird-dropping Spider also uses mimicry of a quite different sort to capture its prey, which consist almost exclusively of male moths. At night the Bird-dropping Spider hangs from the edge of a leaf or twig on a short silk thread, its forelegs outstretched. While doing this it releases a chemical scent (pheromone) that mimics the airborne sex pheromone released by female moths to attract their mates. The unfortunate male moths that are attracted by the spider's deceiving pheromone eventually flutter close enough to the spider to be grabbed by its strong front legs.

In some areas, such as near Brisbane, it has been recorded that the prey consists only of male Lawn Armyworm Moths, Spodoptera mauritia, family Noctuidae. But in the Canberra area, where S. mauritia does not usually occur, a spider was recorded to catch two different but common species also from the family Noctuidae. A female noctuid and non-related species were occasionally caught, indicating that other moths that blunder past will be taken.

Despite its large size, this squat, black, brown and white spider sits huddled on a leaf or branch during daylight hours, often in quite exposed positions. Its colouration and immobile posture fools predators into thinking that the spider is a blob of dung rather than a healthy meal.

The egg sacs of the Bird-dropping Spider are large, marbled brown coloured balls, each about 12 mm in diameter and containing more than 200 eggs. Up to 13 sacs are silked together in a group, beneath which the spider may be found sitting by day or hanging by night awaiting prey.

The bite of this spider is not considered to be dangerous.

Usually no first aid is required. A cold pack can be applied to help reduce any pain or swelling at the site of the bite. 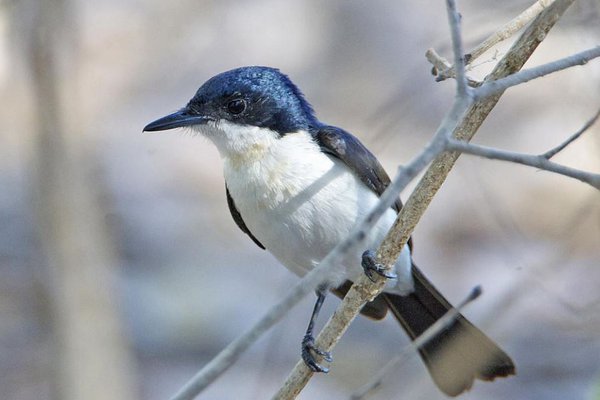