In 1889 Robert Etheridge Jnr wrote, ‘In August last (1887) I was instructed by Dr E.P Ramsay, Curator of the Australian Museum, to proceed …to Lord Howe Island. Our instructions were to investigate the general zoology, geology and palaeontology of that little known and interesting island, aptly termed the ‘Madeira of the Pacific’.

Until this point the Museum had authorised plenty of collecting expeditions around Australia and the Pacific gathering ‘rare and curious’ specimens to add to its ever expanding display cabinets. But during the 1880s, for the first time, it began not just to collect and display specimens but also to interpret and research natural habitats. Its ongoing role - discovering and documenting biodiversity in the Australasian region – had really begun.

The recruitment in 1887 of Englishman Robert Etheridge Jnr as an assistant in the Palaeontology section, completed the Museum’s first scientific team. They now had specialists in insects, vertebrates, birds, geology, molluscs and fossils. 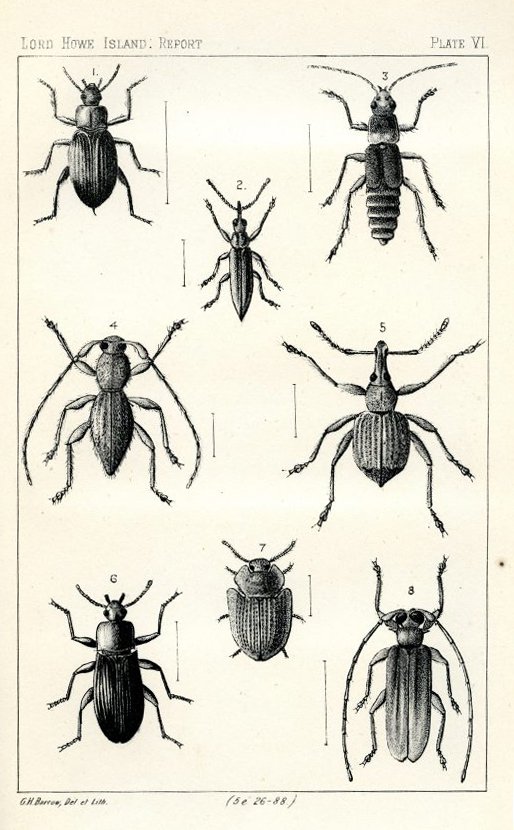 Sundry collections of specimens from Lord Howe Island had previously been made for the Museum from as early as 1869 but this time scientists were also to investigate its remarkable volcanic geology and exceptional range of ecosystems. New species were documented, extinct ones such as the giant turtle Meiolania were researched and conservation questions raised, that still exercise attention today.

In Memoirs No.2 of the Australian Museum in 1889 Etheridge wrote, ‘Soon to become extinct on Lord Howe, unless protected, is the Wood-Hen… a curious and stupid bird…Its gradual extinction is probably due to the ravages committed by the wild domestic cats.’ Heeding this early warning, by 1966 Woodhens were classified as endangered and today their numbers are still closely monitored.

When Etheridge was promoted to Curator in 1895 the Sydney Mail remarked, ‘He is highly –strung, quick, bright, nervous, and wears an intelligent look. Mr Etheridge’s appointment is a distinct gain to the higher education of the colony.’ The ‘colony’ and the Museum went on to benefit from the prodigious output of this dedicated scientist who published over 350 papers on geology, palaeontology and ethnology and laid the groundwork for future Lord Howe Island research.

He died suddenly of pneumonia in 1920 but his legacy continues. In ‘Lord Howe Island 1788-1988: A Bicentennial Publication of the National Library of Australia’ they wrote, ‘One institution must receive the crown of laurel for its contribution to natural history research on Lord Howe – and that is the Australian Museum…’. It continued, ‘Memoirs, No 2 of the Australian Museum is still considered today to be a classic in natural history’.