In Part 3 of this special AM blog series, Melissa Holt outlines the treatment of two Egyptian cartonnage objects - with final before and after shots!

Welcome to the third of this 4-part series, where I take you through the treatment process of four cartonnage objects. In previous blogs, I explained what the goals and plans are for the conservation treatment and the beginning steps of the treatment. In this blog, I will show you the final steps in treating the two masks E019001 and E021583-006.

Previously, I discussed reshaping the cartonnage foot covering and adding Japanese tissue backings to fragile areas of the object. Since these repairs were successful, I was able to flip the covering over to the other side and begin working on the front. Importantly, I had to consolidate the painted areas to ensure that there was no further loss. We used the same adhesive as what was used on the back for the repairs, but at a lower percentage that would slip under the pigmented layer easily. The result was that the paint and gesso layer was secured in place. A small amount of adhesive was also added into cracks to bring them together.

For E019001, the most vital part of the treatment was bringing together the large split in the centre of the mask. This area was a weak point for the mask and so needed to be realigned and supported from the back to create stability for the object. The tricky part with this section was that due to there being loss in this area, the two sections did not align perfectly and so there would be gaps between the two sides. This meant that whatever backing layer was added, it would be visible when viewing the object from the front. For this reason, it was decided to colour the Japanese tissue paper with diluted acrylic paints. I was attempting to colour match the white background of the patterned area on the front. However, I decided to go a different direction; a dark blue/green colour was used to reflect the patterns and the large blue panels. When comparing what the different colours looked like through the gap, we found that the blue was the least jarring to the eye, and didn’t stand out as a repair, when compared with the lighter colours.

The videos below show me using cushions to align the crack and then applying the coloured Japanese tissue paper. I used magnets over layers of foam to add light pressure to both sides of the crack. It was then left weighted overnight which successful joined the two sections.

With the structure of the mask being stable, I was able to flip the mask over and begin working on the front surface. Like the foot covering, the painted surface needed to be consolidated. A small amount of ethanol was applied, followed by the adhesive, to help draw the adhesive in. Areas where the previous paper repairs were lifting needed extra support, which was done by filling the areas with Japanese tissue. Small rolls of Japanese tissue were inserted with the adhesive to draw the lifting areas closer to the object and add support. Where the paper is potentially visible, coloured paper was used as the top layer to make the areas less obvious. A quick brush vacuum was then done across the surface and the treatment of the mask was finished.

With the final repairs completed, the treatment for these masks is now finished. They are both now structurally stable. As mentioned in the first blog, our goal as conservators is to not bring the object back to the condition it was in when it was first made, but to bring it to a condition where it is no longer at risk of deteriorating further, which through this treatment, has been achieved. The next step is for both objects to have new custom storage boxes designed, and display mounts created to ensure their safety for the future.

In the final blog of this series, I will discuss the entire treatment of the final mask E019000 and show you results. Stay tuned! 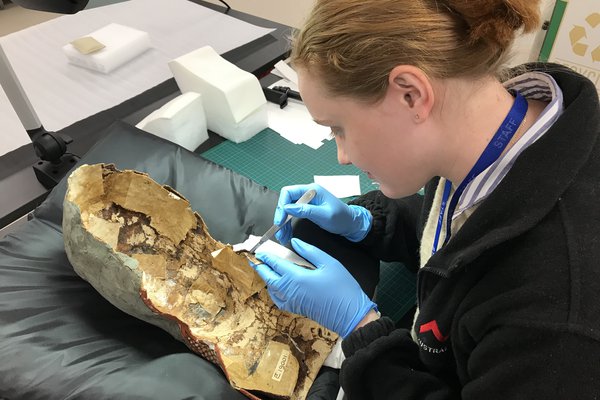 Head to toes: the treatment undergoes!

In Part 2 of this special AM blog series, Melissa Holt tells us about the treatment process for two of the Egyptian cartonnage objects which includes x-ray analysis and tear repairs!

Humans are members of a sub-group of the Great Apes known as the hominins (Tribe Hominini). 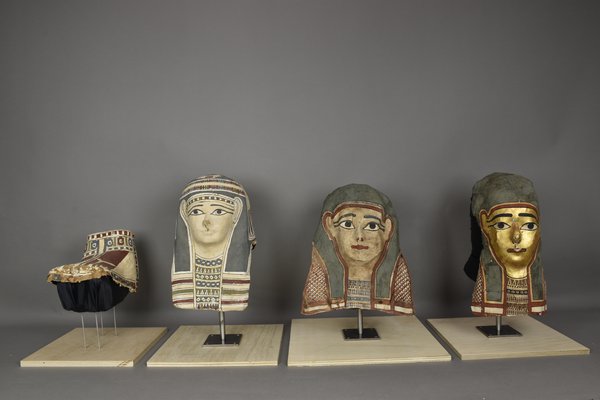 Humans are members of a particular sub-group of mammals known as the primates (Order Primates).