Over the last 12 months, citizen scientists participating in the first nation-wide frog survey have made some interesting discoveries. Certain frog species are turning up far from areas they were previously known. Four species of Aussie tree frogs appear to be particularly successful travellers, being discovered up to 400 km away from where they should be. The citizen science project, FrogID, is providing data that will help us understand these frogs’ movements and what they might mean for conservation.

At 240 species, Australia’s frogs are impressively diverse. As a group, they live in almost every part of the country, from the Daintree rainforest to the Simpson Desert. In fact, only a section of the Nullarbor Plain is thought to truly lack resident frogs. But of course, not all Australian frogs are found everywhere in Australia. Individual frog species are restricted to particular areas, the size and location of which depend on where the species evolved, the type of environment it’s adapted to, and how it can disperse, but can be as little as 5 km2. But sometimes a frog can turn up completely outside of its native range.

In its first year, FrogID users generated records of 66,790 frogs via smartphone recordings of the frogs’ mating calls using the free app. The app automatically includes the geographic location the frogs recorded, and as each species of frog has a different call, a team of frog experts (including us!) confirm the species of each frog species recorded. However, recordings of four species of treefrog took us by surprise by popping up well outside their native ranges.

The Eastern Dwarf Tree Frog has a native range along the east coast of Australia, from northern Queensland to southern New South Wales. Prior to FrogID, the species was already known to have established a few populations in Victoria but FrogID has added records from a further three locations in Victoria as well as detecting the species for the first time in Australian Capital territory, 50 km from its native range.

So how did these frogs end up hundreds of kilometres from home? It’s bananas! Each of these four species, and many others, have something important in common – they’re tree frogs. Adapted for life up off the ground, a lot of these frogs find their way onto farms and plantations and end up in a daytime resting site on whatever crop looks good. Really commonly, that’s banana trees. Other food crops, as well as potted plants and horticultural supplies seem popular too, and these are all things that we ship around the country every day.

It’s estimated that each year thousands of ‘stowaway’ frogs are inadvertently shipped from all around Australia to NSW alone. You might think this isn’t a problem, they’re native species after all. However, hitchhiking frogs have the potential to cause the kind of ecological disruption we typically associate with invasive species imported from other countries, and could inadvertently transmit diseases from elsewhere (including the devastating amphibian disease chytridiomycosis) to their new neighbours.

The data gathered from the first year of FrogID show not only that we still have a lot to learn about Australia’s frogs, but also that what we do know needs constant updating as things change and, more to the point, move. The more people get their phones out and start recording, the greater our understanding will be of these fascinating animals and how to best conserve them. If you have a smartphone and think you hear a frog, join the project and record it – you might just make an important discovery! 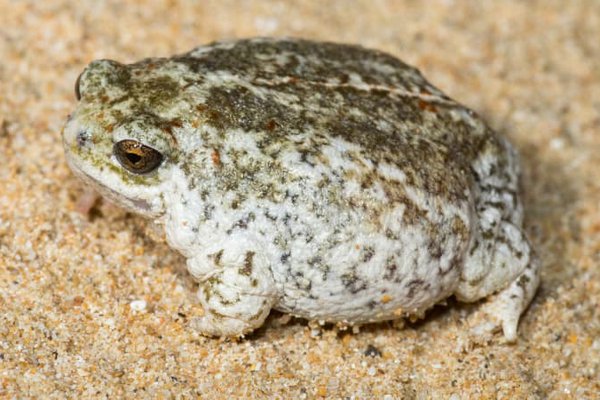 Northern Sandhill Frog is an Australian burrowing frog native to the Shark Bay region of the Western Australian coast.

This frog is a little larger than most of its close toadlet relatives.

The Common Eastern Froglet shows a great deal of variation in colour, markings and size.

The Rocket Frog gets its name from its long pointed snout, but it could equally have got it for its impressive leaping ability.

Litoria nasuta
Read more
Back to top
You have reached the end of the page. Thank you for reading.