The Australian Museum houses over 21 million specimens and cultural objects – the majority of which are not on public display but are stored behind the scenes. Not only are these objects scientifically and culturally important, but also the data attached to them provides valuable context. This includes information on what the object is, where and when it was collected and who it was collected by. These data represent a rich biodiversity library that is used as a tool in a range of disciplines, including taxonomic classification, conservation research, evolutionary biology, biogeographical analysis and pest control. When digitising a specimen, the hard copy data (labels and registers) are transcribed onto the museum’s electronic database and combined with selected digital images (photographs or 3-D scans) of the objects. This information is then made publicly available – but there is more to this process, and the AM collections, than meets the eye.

Opening up the treasure trove

Creating a digital record of specimens enhances access to the collections, in a plethora of impactful and significant ways. Previously the ability to access and study many of the specimens and data was limited to on-site visits or through loans to scientists and researchers. Following digitisation, future external researchers, data analysts and citizen scientists will have greater access to both the specimen and the related data 24/7. Furthermore, it will future-proof the collections by reducing the need to handle the objects as frequently, resulting in reduced wear and tear.

For almost two centuries the AM has been acquiring specimens, which has resulted in a backlog of unregistered material. Excitingly we have already uncovered specimens of species that are poorly known and represent new distribution records, adding to the understanding of their biology.

Digitising life under the sea

Registers cataloguing the Marine Invertebrate collection date from 1883. It is one of the most diverse zoological collections held in the AM. The collection covers a wide range of organisms including worms, crabs, lobsters, shrimp, prawns, corals, jellyfish, seastars, sea urchins and sponges, just to name a few! Specimens are kept in liquid preservative (usually ethanol or formalin) or dried. It is estimated that there are over 511,000 samples in the Marine Invertebrate collection, however, less than 50% have been fully documented.

The sponges (scientific name, Porifera) were a recent group we tackled for digitisation (seen in the images below). Specimens preserved in ethanol can be rather smelly and exude a thick mucus, similar to that produced by Slimer from Ghostbusters! In life, this is a characteristic that sponges can combine with chemical defences to ward off predators. Last year we registered over 1500 sponge specimens. Additionally, working with a sponge specialist, Dr Merrick Ekins from the Queensland Museum, over 100 of these have been identified from the images, resulting in some interesting findings.

Five species, Suberea clavata (image below), Cinachyrella schulzei, Hicksonella expansa Coscinoderma nardorus and Clathria (Thalysias) virgultosa, were new records for the collection. The Suberea clavata specimens are from New South Wales, an area where this species has been rarely documented from. One unregistered sponge specimen we discovered was collected in 1888 from Port Phillip, Victoria – a specimen that had been in the collection for 133 years! Already, this project has added to the breadth of the Museum’s collections available to study.

The next group we are working on is the brittle stars (scientific name, Ophiuroidea). These are closely related to seastars, but as their name suggests they are very fragile. An additional challenge is their arms are often tangled up together like the game ‘Barrel of Monkeys’! As with the sponges, we are working with specialists to identify these specimens.

We have also been taking digital photographs of important specimens for requests from scientists around the world. This has assisted with their studies describing species new to science. These requests have included crustaceans, seastars and hydrozoans (see images below). Sending these digital images has been extremely useful due to disruptions in loaning specimens caused by the COVID-19 pandemic.

Submerge yourself in the collections

We expect many more discoveries during this project and we are all very excited to dive in and explore the collections further. 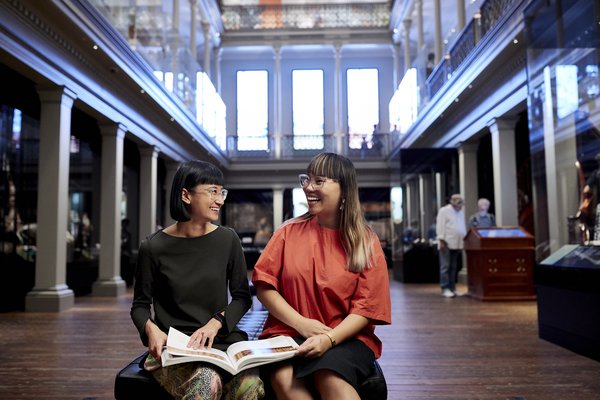 What is your favourite treasure? Use our Treasures conversation starters for fun suggestions and prompts for how to engage with this exhibition.

Treasures Circle
Become a Guardian
Learn more
Back to top
You have reached the end of the page. Thank you for reading.