Let’s play a game. What do you associate with sea snails? Perhaps sedate creatures moving languidly on the sea floor, stationary beings plastered onto rock platforms or hiding in crevices, or maybe just shells washed up on the beach? Whatever it is, you probably wouldn’t conjure up images of venomous hunters with menacing barbed teeth reminiscent of arrows or harpoons, capable of administering lightning fast and lethal attacks? Or would you think of predators roaming the seas, from shallow reefs to depths plunging below five kilometres, chasing entire schools of fish or stopping bristle worms dead in their tracks? No? Perhaps you should, because such sea snails do exist and belong to the extremely diverse group Conoidea. The secret behind their success? A comprehensive dental plan.

You see, the teeth (called radulae) of several conoidean families have over millions of years evolved from more conventional forms into hollow projectiles of numerous shapes and sizes, all with the one purpose – capturing prey as efficiently as possible. Through an ABRS-funded research project on the Conoidea of the deep sea in southern Australia we have had a closer look at these various manifestations. Using scanning electron microscopy, or SEM, we have examined the hypodermic teeth of dozens of new species in minute detail. This provides important clues to the evolution, classification, and even behaviour of the group.

Some of the species discovered live at such depths that evolution has disposed of their eyes – in perpetual darkness, vision is an extravagant and mostly unnecessary luxury. However, any prey on their turf shouldn’t be complacent – these snails have their ways of detection, such as through chemical cues picked up by acute chemoreceptors. Once prey is detected and within reach, the venom apparatus takes it from there. Held at the tip of an extensible proboscis, the radula is aimed at the most vulnerable part of the feast-to-be and the venom delivery takes place. The contraction of a powerful muscular bulb enables the release of venom from a typically long, coiled gland, which passes through the hypodermic tooth and ultimately through an opening near the sharpened tip. This whole sophisticated and novel process happens in the blink of an eye. 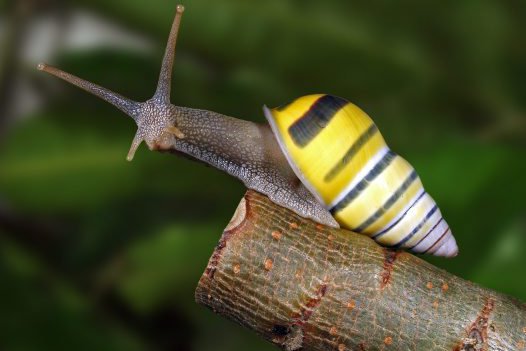 We study the so-called ‘turrids’ (used here as the colloquial term for conoideans not belonging to the families Conidae or Terebridae). Comprising several thousand species from over a dozen families, and with the majority yet to be named, it is the most diverse group of molluscs globally. At AMRI, we do our bit by currently describing more than sixty new species. Some of these previously unknown critters come from depths exceeding 5000 metres, the deepest of any recorded Australian mollusc. A lot of these have been collected onboard the CSIRO research vessel Investigator, with recent expeditions prompting several important discoveries about life in the Australian deep sea.

Over recent decades, studies on the closely related cone snails (Conidae) have shown far-reaching medical potential, with their extremely potent venoms acting as powerful painkillers as they block pain receptors through complex physiological and biochemical processes. However, knowledge of the venoms of turrids, and any potential pharmacological applications these may have, is only just emerging. Understanding the evolutionary relationships and defining the systematics of turrids is an important step toward furthering such knowledge. Toward this end, we use an integrative approach combining the study of numerous genes, the morphology and anatomy of shells and animals, and – of course – with the hypodermic teeth pointing the way.

Who knows, perhaps one day their dental plan will be part of your own health insurance?

Morphology, reproductive biology and molecular genetics of ovoviviparous freshwater gastropods (Cerithioidea, Pachychilidae) from the Philippines, with description of the new genus Jagora

10 June 2021
Read more
Back to top
You have reached the end of the page. Thank you for reading.