I spoke with Fish Collection Manager Mark McGrouther to find out how and why the Museum undertook this big move.

Why did we move the specimens?

In March 2013 we moved the tanks into new, clean, climate-controlled areas that will ensure better conservation and long-term storage of the specimens plus better and safer working conditions for staff.

How did the specimens need to be moved?

The move was a major logistical exercise, the planning of which was overseen by Technical Officer Jacquie Recsei. Jacquie coordinated the extremely complex ordering of how the tanks were to be moved, the logistics of that movement and the design, purchase and installation of new, purpose-built, two-level mobile racking for the tanks. She did a fantastic job.

Every day, following a complex schedule, collection staff moved specimens out of existing tanks into newly cleaned tanks which were then be shifted by professional movers and lifted manually into allocated places on the new racking systems.

Once in place, fresh 70% alcohol was pumped into the tanks. Safety was obviously an important issue and our brightly coloured yellow protective suits led to my fellow fish workers Amanda, Sally and Sam being named B1, B2 and B3.

What can you tell me about where the specimens were stored and where they are now?

The tanks had been stored for many years in a large, triangular-shaped, single-storey brick building. It had open ventilation to a city street and 'whilrly bird' fans on the roof. As a result it was impossible to keep clean.

In addition, the building did not have air conditioning and thus was climatically poor -- hot in summer and cold in winter. Not ideal storage for the specimens. The tanks were arranged on a racking system that meant the top tanks were about 2 m above the ground, making it very difficult to retrieve specimens. Add a low roof height into the mix and we often wore hard hats when we were on top level of the racking to protect our heads from bashing the roof beams.

The new area is climate-controlled and has lower racking which will make working conditions much safer. In addition, the tanks are arranged on mobile compactor systems on two floors of the research and collections building. The space saving compactor system was necessary to house the large number of tanks.

Have storage techniques changed much over the years?

Large specimens have been stored in tanks at the Museum for many years. I don't know how this was done in the early days, but I have heard Senior Fellow John Paxton talk about the specimens being stored in concrete tanks in the bottom of the spirit house many years ago. This was probably in the 1960s and 70s.

I started work at the Museum way back in 1981. Since that time the tanks have been housed in a number of different locations. Their new home is by far the best storage we have had for large wet specimens, and will be a joy to work in. 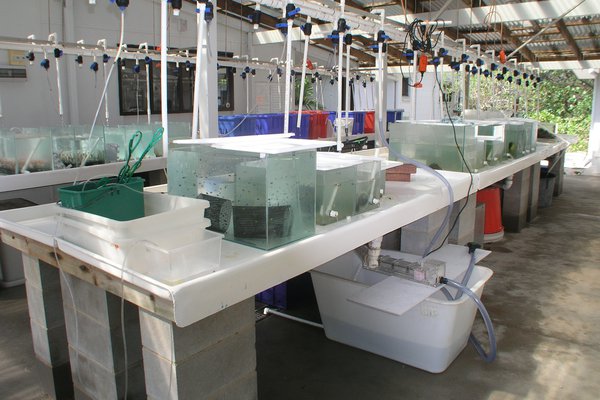 The Station's excellent aquarium system is named after the late founder of the Lizard Island Reef Research Foundation.

Natural Sciences
Cultural collections
Museum Archives
Learn more
Back to top
You have reached the end of the page. Thank you for reading.