Danielle, from the Georgia Institute of Technology in the USA, won the 2013 Yulgilbar Foundation Fellowship, one of three fellowships awarded to early-career scientists for field work at LIRS that year.

Jodie is from the the ARC Centre of Excellence for Coral Reef Studies, in Townsville, Queensland. She is assisting Danielle and collaborating with her for the physiology section of the project – more details in another blog.

Two goby species, Gobiodon histrio and Gobiodon erythrospilus (adults of both species are approximately five cm long), are most commonly found hidden deep within colonies of the fast-growing corals, Acropora nasuta and Acropora spathulata. This means the gobies are rarely seen by snorkellers or divers but Danielle and Jodie can find them.

Both species of goby prefer to live in A. nasuta, but, despite its cute appearance, G. histrio is a bit of a bully and usually forces G. erythrospilus to move to their second-favourite coral, A.spathulata.

Whichever coral they inhabit, both species of fish maintain their homes, in part, by ‘gardening’. Many species of seaweed that live in tropical waters fight corals for space using toxic chemicals. Danielle’s research involves investigating how both species of goby protect their coral homes from a common seaweed called Turtle Grass, Chlorodesmis fastigiata.

Turtle Grass contains a toxin that can kill coral within hours to days of contact so gardening is an important home maintenance task for these gobies. Danielle is also examining whether the gobies protect their preferred coral species more diligently than their less preferred coral species in addition to trying to determine if the different species of goby protect their homes to a different extent.

I have been lucky enough to be involved, to a small extent, with the work that Danielle and Jodie are doing. One of the first underwater tasks was to find numerous samples of the relevant corals that we marked with little fishing buoys on string so we could find them again. We returned to the same site for the next dive with wire mesh frames to place over the corals.

Danielle and Jodie then attached pieces of Turtle Grass (collected on a snorkelling trip between dives) to one side of the cage and a ‘mimic’ to the other side. The mimic was made of looped fly-fishing line and a cable tie and it was used to ‘control’ for shade and abrasion. This meant that any impact on the coral growth could be more accurately attributed to the toxin in the Turtle Grass.

Coral have within them microscopic algal cells called zooxanthellae that produce nutrition for the coral animal through photosynthesis. Coral health can be measured through this photosynthetic actvity. The next step in the experiment was to see if there was any measureable difference in the photosynthetic rate in parts of the coral exposed to the Turtle Grass, to the mimic, or to neither. To do this, Danielle used a submersible photosynthetic yield analyser, commonly known as PAM.

PAM works by pulsing a bright light at the coral through a fibre optic cable and taking a reading of the amount of light that bounces back. If the zooxanthellae are photosynthesising happily, most of the light will be absorbed and little will be reflected. Danielle uses the PAM read-out of effective quantum yield as a proxy for how well the goby is defending the coral against the toxic Turtle Grass.

Why does this matter? Coral reefs are in decline globally and in many parts of the world, seaweeds are replacing corals. We need to better understand interactions between corals and seaweeds, including this one that is mediated by a tiny fish.

Back in Georgia, Danielle will work up the data she’s collected then publish her findings. My only disappointment was that it is incredibly difficult to see these beautiful fish underwater because they hide so well.

The following research projects were carried out during 2001. Project leaders who are postgraduate students are indicated with an asterisk (*). 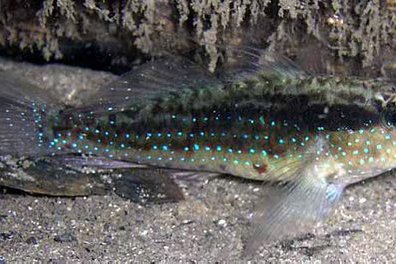 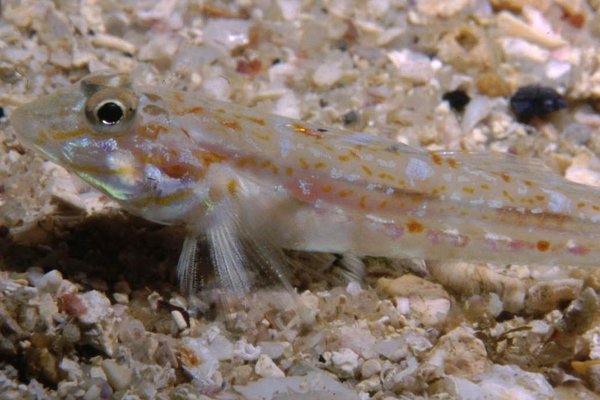