When it comes to finding frogs in the forests of Vietnam, timing really matters. &nbsp;

In 2007, my colleagues and I found two, strange looking Asian Leaf Litter Toads (genus Leptolalax) in the forests of Quang Nam Province, in Central Vietnam. Both were females, and they were larger and paler in colour compared to the other species of Asian Leaf Litter Toads at the same site. In fact, they appeared to be an undescribed species (which was later confirmed using morpholgical, molecular and bioacoustic data). Both frogs I'd encountered simply by chance, as they weren't by the streams that we most frequently survey. Instead, they were sitting on vegetation far away from the streams.

In 2009, in neighbouring Kon Tum Province, we found three more of these strange frogs, sitting in the forest away from the streams, and again, all three were female. We couldn't hear the species calling anywhere. We were now well and truly intrigued. Where were all the males? When did this species breed? And was this species truly as rare as it seemed?

In 2010, our questions were answered. As soon as the sun set on our first night back in the forests of Kon Tum Province, a loud chirping began. It seemed like every couple of metres, a tiny frog was chirping insistently. We had never heard the call before. When we saw the culprit, we knew instantly that it was the elusive male of the Asian Leaf Litter Toad we had been in search of. And there were literally hundreds of them! 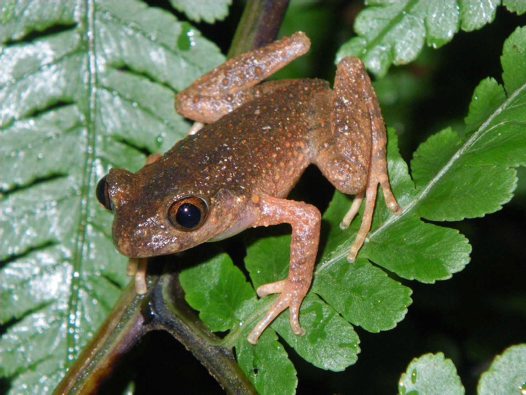 Some frog species live in the rainforest canopy, and will only come down where we can see them during the first few nights of spring rain. Others bury underground and only emerge under the right conditions. Still others, such as Asian Leaf Litter Toads, may stay hidden under leaf litter on the forest floor for most of the year, only to emerge in their hundreds for a couple of weeks a year. Findings frogs has a lot to do with timing- you really have to be in the right place at the right time!

You can read more about amphibian research and conservation in Southeast Asia here.

Finding a frog’s voice in the name of conservation

Frog species are often best distinguished by their calls, so we’ve recorded and published the call of the Jingdong Horned Toad for the first time.