Many Australians encountered Asian culture and began appreciating it in Bali. It happened even to Dr John Yu – a connoisseur and passionate collector of Indonesian textiles. Not that Asian culture was alien to him, but Bali – a hub of sales of cloth from the eastern islands with the rich diversity of local textile tradition – provided an ideal place for encounters and discovery.

One of the textiles that most pleased Dr John Yu during a recent visit to the Australian Museum was a Balinese shrine hanging - lamak. And he appreciated it fully because he knew about lamak. A simple truth is - knowledge amplifies our joy.

Lamak are long narrow cloths that adorned altars and shrines. In this function the top of the hanging lay horizontally on the shrine’s shelf with the offerings placed upon it. The lower decorated portion hung down the front of the shrine. Unlike the common lamak made from the palm leaves or coconut for one occasion, cloth hanging was kept and used for many years.

This exceptional piece (E74106) came into the Museum’s collection in 1976 and was probably made during the 1950s or 1960s in Jembrana or Buleleng district in north-western Bali. 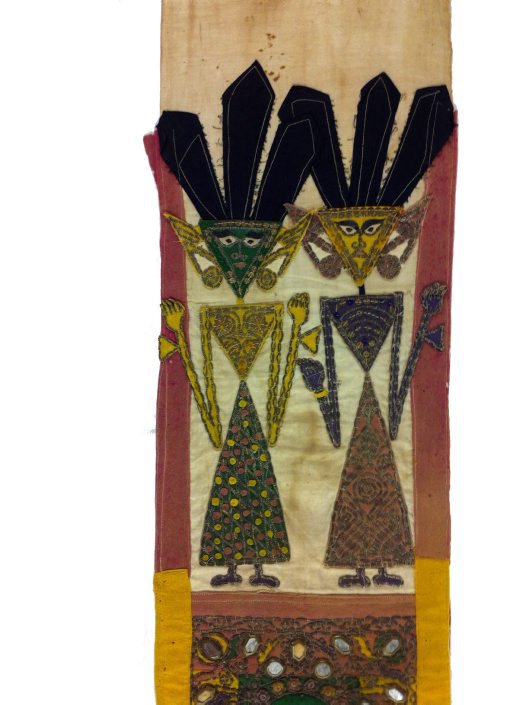 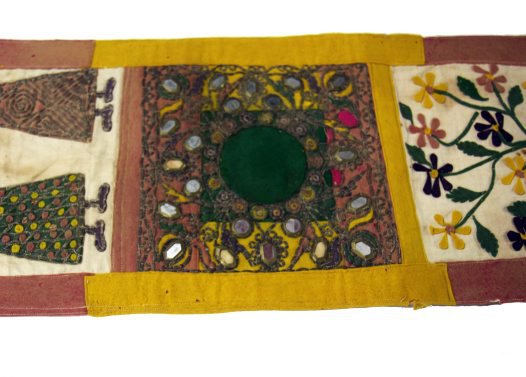 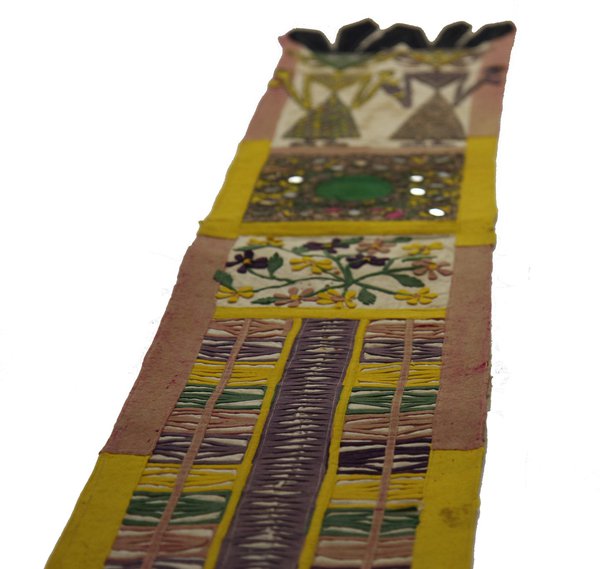 This lamak is an appliqué, made predominantly from coloured felt stitched into a white cotton base.

A pair of stylised female figures cili dominates the top end of the lamak. The cili is often associated with Dewi Sri, the Hindu goddess of rice, agriculture, fertility and prosperity. Although in a feminine form the figures represent a pairing of male and female.

Cili have elongated triangular bodies, long arms bent upwards from the elbows and fan-shaped headdresses. Each is adorned with a pair of large ear ornaments subeng and has large almond-shaped eyes with heavy black eyebrows.

In addition to the plain stitching used to attach figures to the white cotton base, their luxurious jewellery and costumes have been emphasised with couched silver thread and sequins. Also textile motifs are visible on their skirts. The skirt of the left figure has laboriously cut small circular pieces of yellow and pink felt, sewn along with sequins and silver thread, to the green felt base. The skirt of the right figure has a distinct cloth pattern, with a base of pink felt and a motif of geometric diamond and spiral shapes. This pattern was enhanced by couching silver thread onto the base.

Typically the geometric patterns are placed under the figural motifs - this cloth has a square section with a central flower or sun motif, which would once have featured a circular mirror disk (now missing). Flower petals and tendrils radiate around the rest of the space, enhanced by small mirror pieces. Below this is a second square with a plain white cotton base, onto which a pattern of wandering flowers has been sewn. The lower sections of the cloth feature more abstract motifs related to seeds, leaves, flower petals and other plant forms.

Appliqué is a sewing technique in which the patches of fabric are layered on a foundation cloth and stitched in place by hand or machine to create a pattern or an image.

Couching is a process of attaching thick pieces of thread to the fabric with small stitches.

Sequin is a small piece of shiny (sometimes coloured) metal foil, mirror or plastic, usually round, used to decorate fabric and garments.