Australia is home to many unique species of fauna and flora. The praying mantises found on this continent are no exception, with most species only found in this region. Many have evolved in response to the changes in climate and habitats over time.

Australia presently has a variety of habitats, but the majority of the continent is considered arid and is sparsely vegetated. However, this was not always the case. Fossil evidence suggests the land mass was once much wetter and largely covered in forest. When the continent began to dry some species became extinct or reduced in abundance. Others adapted to the new habitats and diversified. The praying mantis genus Rhodomantis seems to belong to the latter group.

Praying mantises in the genus Rhodomantis are found in the more arid parts of Australia. Their body form ranges from moderately robust and elongate to extremely elongate and thin. This streamlined body form seems to be an adaptation to hiding in grasses, which are a major component of the vegetation of arid Australia.

When I began this study, only two valid species of Rhodomantis were known. By examining specimens in the major Australian insect collections, including that of the Australian Museum, I discovered seven new species. During my research I also noticed that the females of some species have developed digging apparatus on their genitalia so that they can deposit their egg cases in soil, unusual for mantises but presumably an advantage in a dry, fire prone environment.

Recent genetic studies suggest that the closest living relatives of Rhodomantis are species that live in the forests of South East Asia and that the ancestors of Rhodomantis probably split from them around 50 million years ago, prior to the drying of Australia. Understanding these species and how they’ve evolved with changing climates in the past may help us understand how our unique fauna may respond to future climate change. 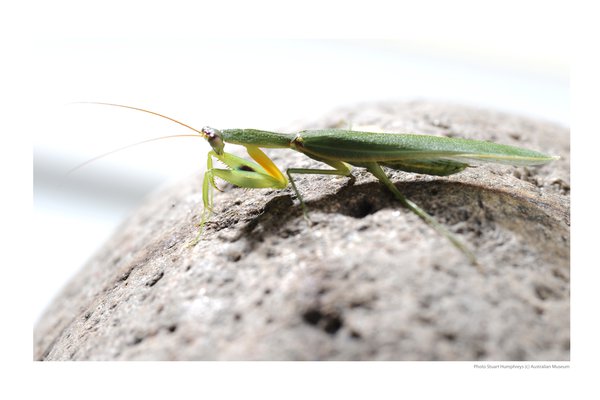