A "feather duster worm" described from Australia has turned up in the Netherlands, and seems to be spreading. With related species known to modify marine ecosystems, this Australian invader is a cause for concern.

The “feather duster worm” (Laonome calida), described in 2007 from open waters in the Dampier Archipelago (Western Australia) and brackish environments from Brisbane Waters (Queensland), has recently been found  in the muddy sediments of the in man-made canals and natural estuarine environments of the delta regions of the rivers Rhine, Meuse and Scheldt, in the Netherlands.

These worms were first detected in the Netherlands in 2009 and seem to be spreading along delta regions, suggesting they are a recent introduction. Measuring only 9-15 mm in length, they appear to be identical to the Australian populations, which is the reason that they have been identified as the Australian species. But the native distribution and origin of these worms is still far from being understood.

The biology and reproductive strategies of this species is unknown but they may well have been unintentional translocated by ships via mud in their ballast water tanks.There are increasing reports of the worms in surrounding areas in the Netherlands, causing concern that the Australian worm may spread throughout these delta regions and into other European ports by hitching rides in the ballast tanks of ships.

So, should we worry?

The answer is yes, at least until we learn more about how this introduced worm interacts with its European cousins and the native ecosystems. Worryingly, closely related species of fan worms are known to heavily modify marine ecosystems.

The next step will be to use molecular techniques to determine the exact origin from which these invaders came from and if they are in fact the Australian species we think they are. 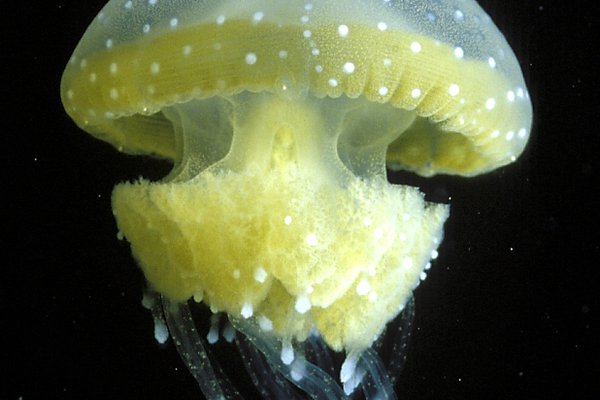 This large and spectacular jellyfish is common during the summer months in New South Wales coastal waters and estuaries, including Sydney Harbour.

A crowd of Invertebrates-Worms and more