Read selected extracts from the notebooks of the most famous natural history illustrators working in Sydney in the nineteenth century.

In the late winter and spring of 1839, before Harriet and Helena were old enough to be involved in the butterfly and moth project, AW Scott and his stepdaughters Fanny and Mary observed Saunder's case moth Metura elongatus (Saunders, 1847), making notes on its habits and appearance and producing detailed drawings.

This series of observational entries was begun by Mary Scott (MS) in July 1839:

"Chrysalis of the male Oiketicus (sp?) of a dark black chocolate colour, thin and pointed at the end - turned a chrysalis on the 15 July '39."

By September, the moth had emerged and  Mary's older sister Frances Stirling (FS) has taken over the description:

[Nos. 91 and 92] "Male Oiketicus (sp?) took wing on the 11 Sept '39 head and thorax bright yellow, body and wings jet black ... this insect has a bluff appearance about the head and somewhat resembles an owl. It has the power of elongating its body & tail to a considerable length & recurves it continually [see drawing 92]. The motion of the wings so quick as to render them invisible it soon destroys its plumage by its velocity and violent motions.(FS)

[Drawing 93] Case of the male Oiketicus showing the final affixement to a stem, previous to changing to the chrysalis state and likewise the method of its escape to the winged state with the remains of the shell - the whole of the above taken from nature & of exact size and appearance (FS) 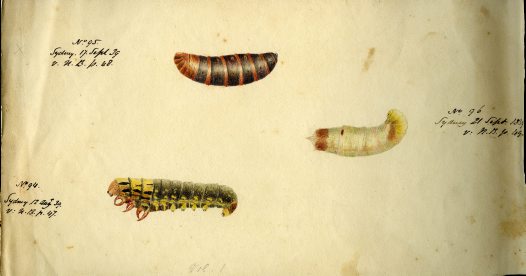 [Drawing 94] The larva of the female Oiketicus. The colour of the insect opthal part which is seen when crawling of a bright deep yellow with deep black longitudinal stripes, feet six & shiny and of a vermillion colour- of that part usually within the case of a brown pink - with a yellow stripe on each side and yellow spot with a black curler ? to each annulation 10 feet, yellowish, on the tail aprt a vermillion spot - drawing exact size and appearance, drawn 12 August 1839 (FS).

[Drawing 95] Chrysalis of the Female Oiketicus. Head of a Saturnian red with a little yellow, showing the head & front feet of the animal. body of a black red and much lighter red between annulations. Light spots near the underpart on each side on each annulation and small black ones above -- drawing of exact size and appearance. Drawn 17 Sept, 1839 (FS).

[Drawing 96] Female Oiketicus of a semi transparent yellowish hue -- perfectly apterous-- the lower part of the body continually moving about. Towards the end a broad ring of soft straight silky brown hair and one bright spot of the same on the belly and a patch of lighter on each side where the front feet are- on the side of the neck the colour is of a brighter yellow. The female is much larger than the male. The inside of this insect could be plainly seen it is so transparent. Drawn of exact size and appearance. Became perfect insect 21 September 1839. Several male & females came out about the same period, the female kept alive for several days when it deposited its eggs, and died -- it has no power of leaving its case. (FS)"