Flaked tools made of the natural glass obsidian and found at ancient quarries in New Britain, Papua New Guinea pose an intriguing problem because they are shaped like axes, but glass is generally considered too brittle a material for chopping. But is it? To test if these obsidian axes were functional, we made replicas using the same kind of obsidian. The flaked tools lashed onto handles like axes and adzes were found to be surprisingly effective at chopping soft wood. Analysis using high powered microscopy then revealed the same wear patterns had formed on the cutting edge and handles of the experimental and archaeological tools. The obsidian artefacts were probably used as special purpose tools, perhaps to make items like masks or shields for ceremonies and rituals.

It seems obvious that the first colonisers to reach the island of New Britain in Papua New Guinea and carve out villages in the tropical forest 40,000 years ago would require sturdy wood-working tools for making boats and houses. Archaeologists have therefore been puzzled that stone axes do not appear in sites in this region until 3000 years ago. Flaked artefacts resembling axes from several obsidian quarries have been recovered from much earlier contexts, but we assumed that these were rejects from making ceremonial stemmed tools because this natural glass is very brittle and shatters easily. To test these assumptions we needed to examine if obsidian tools were strong enough to successfully chop wood. 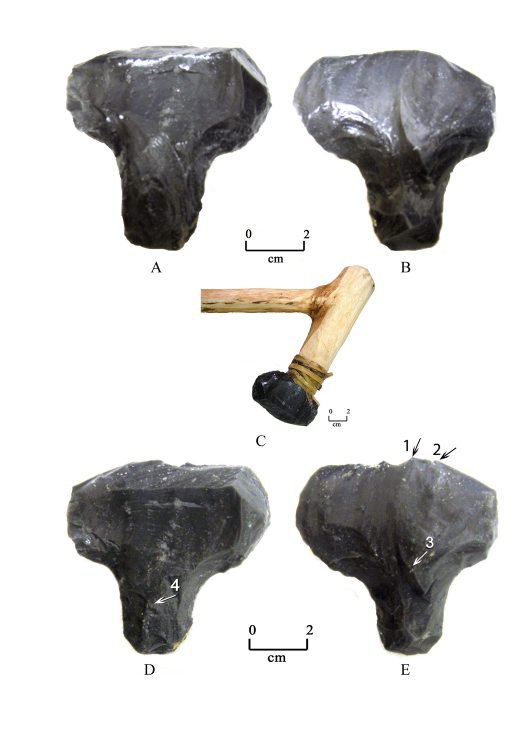 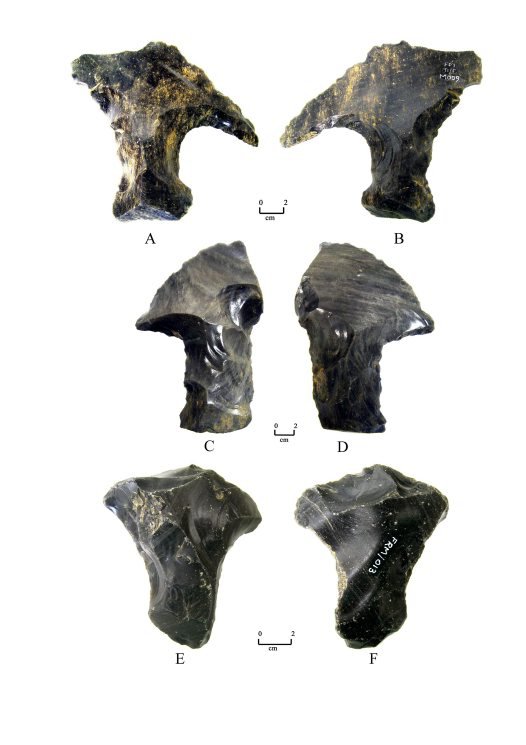 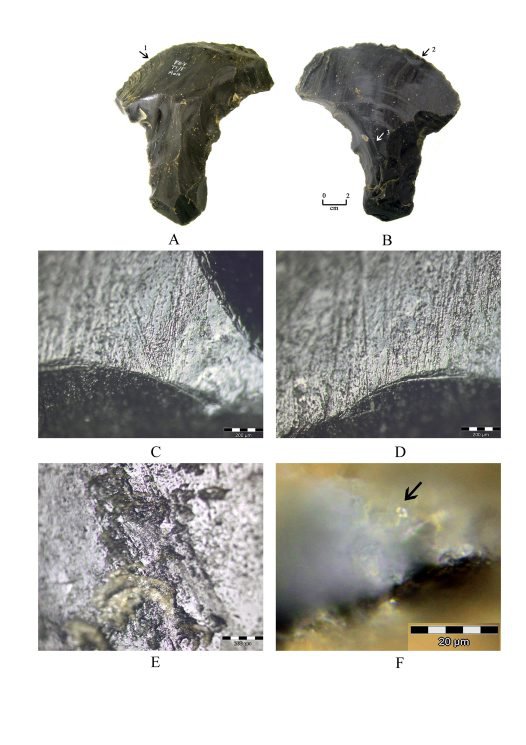 Experimental copies of the ancient artefacts were made from local New Britain obsidian. Flaked with a technique called ‘kombewa,’ they have a strong, sharp cutting edge and a stem for fitting into a handle. Like axes and adzes in modern Papua New Guinea, some were bound onto a bent handle, whereas others were tied onto or inserted into a straight piece of wood. Some of our first experiments were conducted in New Britain helped by a local man, Paul Bongi, who knew which wood made the best hafts. A range of woods were tried, but obsidian was only effective in working the softer varieties.

The experimental tools worked best when the cutting edge was 45-60 degrees. As we expected, the edges chipped and broke quite quickly, usually within half an hour, but to our surprise the resulting broken edge proved to have a self-sharpening effect so the tool could still cut wood. One tool was not exhausted even after an hour of use. Larger, heavier tools lasted longer than lighter ones. Keeping a tool bound tightly to its handle proved to be one of the most difficult parts of the experiments. When they were examined at magnifications of up to 1000x, traces of use-- such as edge rounding, striations and polish, together with wood residues-- were identified on the edges of the tools and on the stem.

The archaeological artefacts all came from strata more than 3000 years old. The surfaces of many were quite weathered, but patches of wear and some residues, such as plant fibre, starch and resin, survived. Wear traces caused by binding them to a handle were also visible. They showed that most were choppers, with a few also used for sawing.

Most obsidian chopping tools in our sample were found at obsidian quarries where ceremonial, stemmed obsidian tools were carefully flaked by skilled workers. We suggest that these were special places where craft specialists also used the utilitarian obsidian choppers to make other ritual paraphernalia such as masks or shields.

Finding obsidian chopping tools only at locations where special activities took place raises the question of why other woodworking tools are absent throughout most of New Britain’s history, unlike nearby on the mainland of New Guinea where sturdy ground stone tools are very common. How did people hollow out logs to make boats or clear forest for gardens? Perhaps for heavy duty wood working people on New Britain used axes made from large shells, now weathered away by the acidic volcanic soils? Although we have discovered that, contrary to belief among archaeologists around the world, obsidian can be manufactured into effective chopping tools, the experiments and lab work have raised yet more questions. Certainly, there is still much left to be discovered about ancient life in New Britain.

Kononenko, N. 2011 Experimental and Archaeological Studies of Use-Wear and Residues on Obsidian Artefacts from Papua New Guinea. Technical Reports of the Australian Museum 21.

The contribution of use-wear/residue studies of obsidian for understanding changes in settlement and subsistence patterns in West New Britain, Papua New Guinea

Skilfully made obsidian replicas enable scientists and communities to benefit from and enjoy significant archaeological discoveries.