Whenever I see waves crashing onto rocks, smell the sea air or hear the sound of sea gulls, my mind drifts back to Balls Pyramid, the spectacular pinnacle leaping out of the sea near Lord Howe Island. My two climbs up its razor sharp ridges remain etched into my mind.

As the boat enters open ocean, the Pyramid is but a speck on the horizon. Moving closer, the colour-shifts of the rock begin to appear - silver, white, brown, black and then back again. All too soon it’s looming over you like a medieval castle, and a feeling of fear and dread begins to permeate your being.

Closer still, it’s time to swim the surrounding moat and clamber onto its rocky ramparts. Many people attempting this have been badly barnacled for their efforts. Once established on the rock, the boat disappears around the corner - a feeling akin to being marooned on the Flying Dutchman. But at the same time a surreal wonderland presents itself.

The initally overpowering smell of guano soon dissipates. The originators of this aroma? Young fluffy Masked Boobies totally unafraid of your presence, aerobatic Tropic Birds with striking red tail-feathers, Shearwaters circling then diving vertically into the ocean after fish, Noddy Terns bouncing cheekily along the small ledges beside you as you climb. The French expedition to the Pyramid in 1984 was frightened by the numbers of birds, and likened their experience to a particular Hitchcock film. 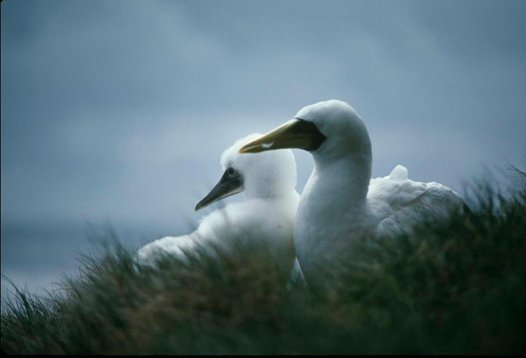 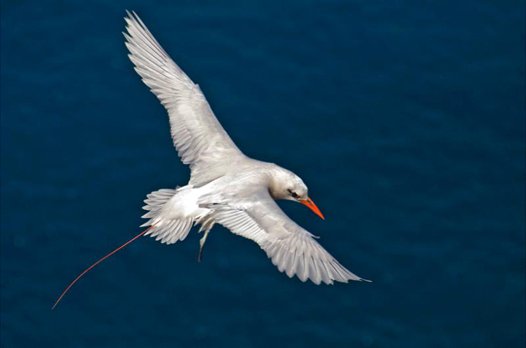 At sunset, when settling down on a ledge, you are often confronted by a silhouette of outspread wings as a Shearwater puts on its air brakes, stalls, then crashes clumsily onto the ledge, right into you if you happen to be sitting in the wrong place. At night you wake to find two or three of the birds perched on you, another one or two tucked into your sides for warmth. Once settled they often coo in such a soporific manner that one climber was inspired to name a particular ledge ‘The Orchestra Pit'.

If the sun is low you can sometimes see the Pyramid’s shadow stretching across the ocean. And when looking straight down hundreds of metres, I can remember seeing a large yellow Sun Fish basking lazily on the surface, while other climbers swore blind that they could see sinister grey shapes in the water.

On my second trip the sky was overcast and the wind increased as we gained height. A late afternoon radio correspondence revealed that a cyclone was on its way. Next morning we woke to misty, rainy, windy conditions. We agreed that we must make it down to lower levels where a tiny cave would provide some degree of shelter. This cave was about 75 metres above sea level. We had a long way to descend.

We arrived there late afternoon in atrocious conditions. The surf below was boiling so we decided to forgo the pleasure of retrieving our sleeping bags down near the waterline, and instead slipped into thin nylon bags - scant protection against the rigours of the night. Cyclone Kirsty hit us with full force about two in the morning. The mouth of the cave became a waterfall and spray was swept back onto us by the wind. The associated noise sounded like an express train.

The first rays of light revealed a tumultuous scene, an awesome display of nature’s capriciousness. Birds, rocks and grass were swept off the Pyramid and thrown down into the sea. The ocean below was a churning white mass of spume and foam, punctuated only by the dark carcasses of the dead birds. And then the crowning glory: a massive vortex, arising from the surface of the water, spinning like a huge tornado and seemingly metres from our perch. We sat back in awe.

It was a maelstrom, an amazing unleashing of natural forces – a great vortex of wind, water and birds, like a column, hanging in the air in front of us and seeming to blast right over the top of the Pyramid. It was frightening.

After the cyclone passed we were trapped for several days. There is no fishing, swimming, sun baking or relaxing on this end of the Pyramid as it rises steeply from the sea with only a few small ledges. In the end a shortage of food and water forced us to decamp. At sea level we were confronted by 5 - 6 metre surf with the boat standing about 130 metres off shore. We checked the waves, took deep breaths and then dived as the ocean reached its zenith. When I eventually reached the boat I was lifted aboard by some friendly fisherman – exhausted but relieved.

In February 2015, I attended the fiftieth anniversary of the first ascent of Balls Pyramid. When talking to other climbers I was amazed everyone felt they had been touched by their time on the rock. All mentioned the birds, the smell, the fishing, the exposure and the rugged beauty of the place. It inspired me to write:

The Pyramid remains majestic, magnificent, magical and mystical; a beckoning siren to climbers, and those who fall under its spell remain entranced forever.

Keith Bell is currently assiting on an Australian Museum expedition to attempt to scale Balls Pyramid in search of the rare Lord Howe Island Phasmid.

All images taken from the book SOUTH PACIFIC PINNACLE: The Exploration of Balls Pyramid by Jim Smith and Keith Bell.