Last winter, people began noticing an alarming number of dead frogs around Australia, particularly along the east coast. At this time COVID-19 lockdowns were in force; the Australian Museum Herpetology team and collaborators asked the public to report any sick or dead frogs to the AM via email, and if in NSW, we asked the public to carefully collect and freeze any dead frogs so that they could form part of our investigation once the lockdowns were over. Since then, the team has been collecting these dead frogs from across the state. Numbering in the hundreds, they form an important part of the puzzle in determining just what is killing our frogs.

Picking up dead frogs is not exactly a cheerful task, but it is an important one. In June, my colleague Chris Portway and I were on a mission to pick up dead frogs from people’s homes around the state. I’d just arrived in Australia from the United States of America to help understand the impact of disease and fires on Australian frogs, and this trip was my first outside of Sydney. Most of the frogs that people gathered had been collected already, but this last batch was vital.

Our first stop was a property outside of Lismore, a town that was devastated by flooding in February. As we parked the truck, we saw a farmhouse that was still in shambles from the floods. They were still rebuilding. Soon we spotted a farmer pushing a wheelbarrow behind the house. He looked up and greeted us with a smile and wave. We learned that he lost his entire flower farm in the floods. He told us he had been finding dead Green Tree Frogs (Litoria caerulea) around his property since last winter. He offered to show us around his property to look for frogs. We checked one of his rain collection tanks to only find another, recently dead Green Tree Frog. You could see the disappointment on his face. He knelt in the grass as he studied the frog before looking up at us. He asked us if we knew what was killing the ‘little buggers.’ I wished we could give him a straightforward answer. He knew this land well and he knew what was happening wasn’t normal.

Everywhere we went, the story was the same. People had lived somewhere for years, sometimes decades. There used to be frogs, but they’d vanished. Many had been using the FrogID app to record frogs on their smartphones. Submitting a recording of a singing frog may not seem like a big deal, but when you combine hundreds of thousands of submissions, suddenly we have a much clearer picture of when and where different species of frogs are calling. Of course, FrogID data collected by citizen scientists is valuable for science and conservation, but FrogID is about so much more than data.

I was impressed by the specific knowledge of the people we met. They weren’t just hearing frogs. They were listening to the rhythms of nature, the miniscule changes. I was surprised to hear a farmer saying, “We had Litoria fallax calling here last season,” or an elderly couple who invited us in for coffee noticed that they’re hearing fewer Mixophyes balbus since the bushfires. They then handed us a zip lock bag with the body of a frog, as if to prove it. The beauty of citizen science is that it connects this kind of intuitive awareness with a scientific language. People can now put universal words to what they’re seeing in their own backyards. It’s helping connect a community of people to nature.

To say that I felt inspired after spending a week driving around New South Wales witnessing the aftermath of horrendous floods, fires, and an ongoing, mysterious frog die-off seems strange. Yet seeing people tackling a big issue by working together, one frog at a time, gave me a sense of hope. We’re collaborating to understand the cause and impact of this strange mortality event, but we can only do so with the help of people reporting dead frogs and using FrogID. FrogID enables people across the country to tune in and record what’s happening while gathering the information we need to better understand, and conserve Australia’s frogs. That’s something worth celebrating.

Citizen science doesn’t happen without the effort of citizens, so thank you to everyone who has recorded frogs on FrogID or reported and collected dead frogs to help with our investigation. We appreciate it!

Many thanks to the Australian-American Fulbright Commission for enabling me to conduct research and study in Australia. 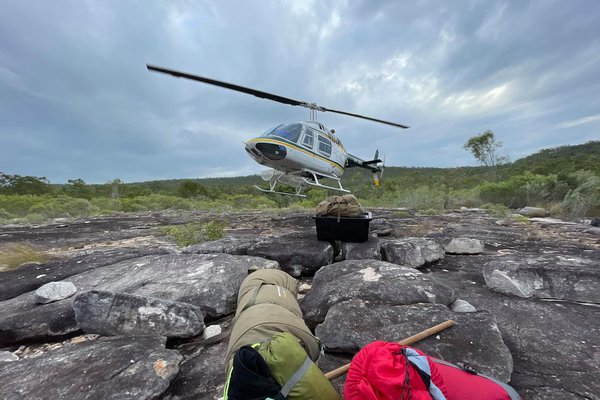