Modern knowledge of biodiversity has been aided by the development of genetic techniques, which have revealed that many long-recognised species are actually complexes of multiple cryptic species, only distinguishable by subtle features that may no longer be evident in preserved specimens. This leads to problems when attempting to reconcile modern knowledge with species that were named one or more centuries ago, at a time when species diversity was thought to be much less, and when attribution of new species to continents (e.g. “New Holland”) or regions (e.g. “New South Wales”) was considered sufficient. Determining where such specimens came from, and even which specimens constitute the original type specimens (those on which the species were first named) can require much historical detective work, but is essential to tie these old names to modern species concepts. We have recently come up with solutions to two such problems among the small Australian frogs of the genus Pseudophryne (commonly known as toadlets from their warty appearance, though they are not related to true toads).

There are 14 species of Pseudophryne currently recognised, some of which have very limited distributions and are threatened with extinction. Most Pseudophryne species have very similar calls (usually described as a “squelch”) and body shape, leaving colour pattern and the shape of small tubercles on the feet as the main distinguishing features between the species. Many of the pigments disappear in long-preserved specimens, which can therefore be difficult to identify.

The very first Pseudophryne to be described was the Red-Crowned Toadlet, Pseudophryne australis, named by John Gray at the British Museum in 1835. This species is now known to be restricted to the Sydney region, yet the original description was based on a specimen said to be from Swan River. Clearly, something was wrong – either the original type specimen was from the Swan River in Western Australia, and represented a different species, or the locality Swan River was wrong. The original type specimen is still in the Natural History Museum in London, and certainly seemed to be the Sydney species (though most of the colour features had faded away). How could it have been given the locality Swan River? Gray’s description said the specimen was donated by a Mr Joseph Wright – but who was he?

The Swan River colony in Western Australia was only founded in 1829, so it should have been easy to locate any Joseph Wright settling there between 1829 and 1834. However, the early censuses of Swan River settlers listed no such person. Eventually, we read the diaries of another early Swan River settler, George Moore, and came upon the name Joseph Wright. Joseph William Wright was an Irish lawyer who had migrated to Australia in 1831, first visiting the Swan River Colony and buying land there, before moving to Sydney a few months later, and staying in New South Wales until at least 1834. His time at both Perth and Sydney had resulted in confusion about where he had collected the frog, confusion that had remained unresolved until our work.

The second Pseudophryne species to be named was the Brown Toadlet, Pseudophryne bibronii. Specimens of this species were first mentioned, but identified as Red-Crowned Toadlets, by the French herpetologists Constant Duméril and Gabriel Bibron in 1841. It was not until 1859 that Gray’s successor at the British Museum, Albert Günther, formally named the species from material in the British Museum, recognising Bibron’s error in identification by naming the species after him. However, Günther’s successor, George Boulenger, discovered that Günther had made a similar error, as the five British Museum type specimens that were the basis for Pseudophryne bibroniiconsisted of three species: two specimens were a south-west Australian species, which Boulenger named Pseudophryne guentheri, and two were from Tasmania, and represented a species that was later named Pseudophryne semimarmorata. This left just the one specimen that could have represented the south-eastern Australian species that has since been assumed to be P. bibronii. However, this specimen has subsequently been lost, and with a locality “Australia”, and an original description that was just a couple of lines long, it has never been clear which species was involved. Resolving this issue has recently become more urgent, as genetic studies have indicated that the Brown Toadlet includes cryptic species – but which one of them was to bear the name P. bibronii?

Careful reading of the Code of Zoological Nomenclature, the international regulations for the naming of species, gave us an elegant solution. Because Günther had attributed the earlier French account to his new species, the specimens in Paris also had to be considered as type specimens of P. bibronii. And these specimens were still in existence! Even more importantly, the collectors Péron and Lesueur were associated with them. François Péron and Charles-Alexandre Lesueur were respectively zoologist and artist aboard the French expedition that visited Australia between 1801-1803, led by Nicolas Baudin. In his account of the voyage, Péron mentioned that it was only while the expedition was in Sydney that he was able to find frogs, collecting several species in the vicinity of Parramatta, and Lesueur had painted the frogs Péron collected. These paintings, only some of which had previously been published, are still in the collection of the Museum d’Histoire Naturelle in Le Havre in France. We were able to obtain a photograph of Lesueur’s painting of one of the Pseudophryne specimens, and it is clearly the species to which the name has generally been applied.

Our detective work has allowed us to fix the name Pseudophryne bibronii to the Brown Toadlet population that occurs in the Sydney region. This now makes it possible to name other species in this complex, some of which seem to be declining in numbers and are potentially threatened, so are of high priority to formally name and conserve. 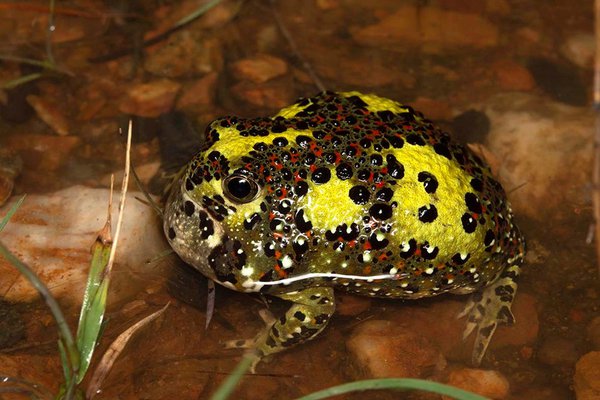 Tips to identify a Cane Toad or native frog in your backyard
Read more
Back to top
You have reached the end of the page. Thank you for reading.