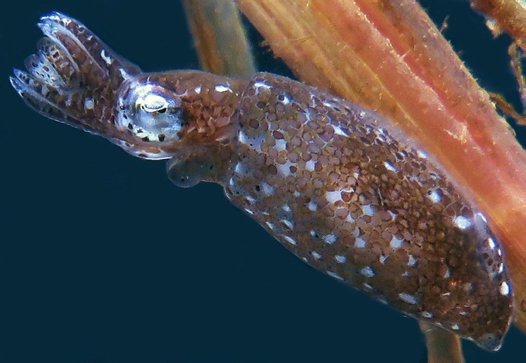 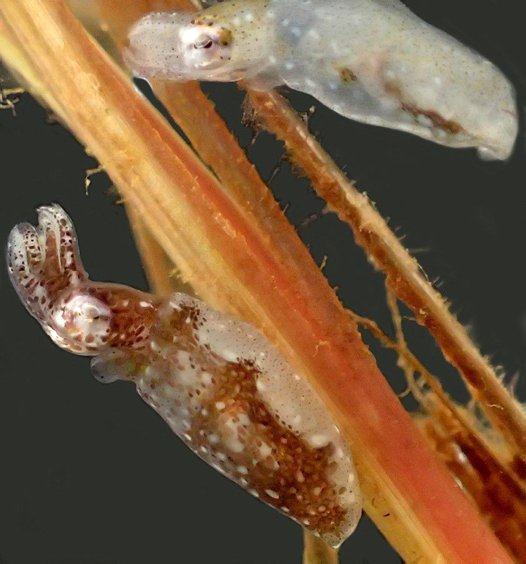 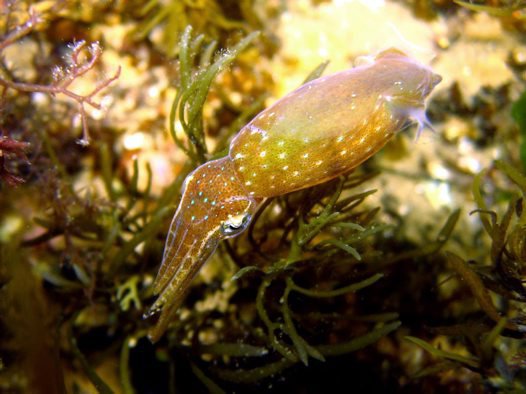 First found among our Australian Museum’s preserved specimen collections, a new species of pygmy squid from eastern Australia has just been described. Its discovery has led to other new insights into this intriguing family of tiny 'squids'.

Although not true 'squids' (though part of the large group of animals, called cephalopods, that include squids, cuttlefishes and octopuses), these tiny creatures coined their common name from their general squid-like appearance and tiny size. With adults in this group ranging up to about 2 cm in body length (excluding the head, arms and tentacles), these diminutive squids are the smallest cephalopods known.

They are found throughout the Indo-Pacific from Australia, through to Thailand and Japan as well as the Indian Ocean side of southern Africa. They inhabit seagrass and mangroves, to which they attach using an oval adhesive pad on the rear end of the upper, or dorsal side, of their bodies. This has led to coining of the name 'suckerbum squid' by one of our fishy colleagues (although, in reality, the squid 'bum' is actually positioned somewhere else entirely!). Like all cephalopods, they are carnivores and feed on other small passing prey, such as crustaceans and tiny fishes. In turn, they themselves make tasty snack for other larger animals.

While identifying some pygmy's among the AM collections, I found a species that didn't 'fit' based on its morphological features with those species already known from Australia. In addition, it was shown to occur with another species of pygmy squid throughout the southern part of its range and had been muddled with yet a third species from the north. This led to comparison of the new species with idiosepiids from other parts of the world and collection of fresh animals over its entire known Australian range (from Shoalwater Bay, Qld to Narooma, NSW) to enable Jan to compare their molecular sequences with those from elsewhere.

It has been named Idiosepius hallami, after my son Hallam (once himself small and cute) who has helped me collect specimens up and down the coast.

When comparing this new species with the previously known southern pygmy squid, Idiosepius notoides, it also became clear that I. notoides differs remarkably from all other known pygmy squid both in morphological and molecular traits and forms a distinct clade, or branch at the base of the evolutionary tree of pygmy squids. This has resulted in its placement in a new genus Xipholeptos, now only the second genus in the family.

Living where they do, among shallow-water seagrass and mangroves, pygmy squid live in one of the world's most threated ecosystems, so an increased understanding of these habitats and their associated fauna is of high importance.

Description of Pugnus, a new genus of Ringiculidae, from Sydney Harbour

Contributions to the cranial osteology of the fishes. No. VII. The skull of Neoceratodus forsteri: a study in phylogeny