Each of Australia’s 240 frog species has a unique call, but within a species, how variable are the renditions of that call? We investigated just how different individual calls within a species can be by using frog call recordings submitted from across Australia by citizen scientists as part of the national citizen science project FrogID. We discovered that Australian frogs indeed have accents, and their accents change as we move across the country, and even over time!

Call of the Red-eyed Tree Frog

Frogs, birds, insects, and marine mammals all use advertisement calls to find a mate. An advertisement call is unique and consistent within a species and differs from others, which helps to find a mate of the same species. This is essential for healthy offspring. Scientists often tune into these unique calls to identify and distinguish between species. Sometimes, the strange call of a bird or a frog gives an individual away as a species yet to be described by science!

When it comes to frogs, we’re all familiar with the ribbits and croaks coming from streams and ponds. These are the typical tones of male frogs singing to attract females of their own species. Each male frog sings his species song a certain way, hoping his rendition gives him the best chance of finding a mate. Call differences between species are still much stronger (like different languages), whereas call differences between individuals are subtle (like personal speech variations within the same language). Once a female frog finds a male who speaks her language, she judges the finesse of his call. So, a frog’s call can make or break his breeding success!

While we know that frog calls vary within a species, particularly due to temperature and the body size of the frog calling, most of what we know comes from only a handful of individual frogs recorded in small areas and only at a certain point in time. That is because it’s incredibly difficult for scientists to find and record frogs. We can’t be everywhere all the time! However, thanks to people across Australia recording their local frogs as part of the national FrogID project, we are now able to understand frog accents like never before.

We tuned our ears to the calls of six species: the Squelching Froglet (Crinia insignifera), the Eastern Sign-bearing Froglet (Crinia parinsignifera), the Western Banjo Frog (Limnodynastes dorsalis), the Striped Marsh Frog (Limnodynastes peronii), the Red-eyed Tree Frog (Litoria chloris), and the Orange-thighed Tree Frog (Litoria xanthomera). We listened to an amazing 1,487 FrogID recordings of these species and analysed 762 recordings from across the country, which is magnitudes more than other studies, and more than scientists alone could ever dream of recording!

Using this vast dataset, we found that frogs indeed have accents, with frog species changing their tune across the country, and over the course of a year! As you might expect, frog accents from places further away from each other differed more. Somewhat surprisingly, the accents of frogs also changed over time, with calls made only a few days apart being more similar than calls months apart! This variation could affect interactions between individual frogs, as well as scientists’ interpretations of these calls.

More specifically, our findings have implications for researchers comparing frog calls, especially when using frog calls to distinguish one species from another. Because of the variation of frog calls across time and space, conclusions drawn from only a handful of calls of a population or species could be misleading. We found that most of the variation in a frog call can be captured by analysing the calls of 20 or more individuals, distributed across the range and throughout the breeding season of the species. We suggest that, where possible, the calls of a minimum of 20 individual frogs be analysed for each population or species compared.

Call of the Eastern Sign-bearing Froglet

Thanks to every citizen scientist across Australia who records frog calls in their backyard or in the bush, we now have a greater understanding of how variable frog calls are. It seems that each individual frog has his own unique rendition of his species song, determined to some extent by his location and the time of year. Awareness of these patterns will improve future descriptions of frog calls and could also help any frog call enthusiast identify and appreciate Australian frogs.

Call of the Striped Marsh Frog

We thank the Bucknell University Presidential Fellowship Office for the student funding to endeavor this project. We thank the Citizen Science Grants of the Australian Government for providing funding for the FrogID project, the Impact Grants programme of IBM Australia for providing the resources to build the FrogID App, and Bunnings, the John T Reid Charitable Trusts and Fyna Foods for supporting FrogID. We thank the thousands of citizen scientists who contribute to FrogID records, and the FrogID team, who validates submissions, thus creating the robust dataset which made this study possible. 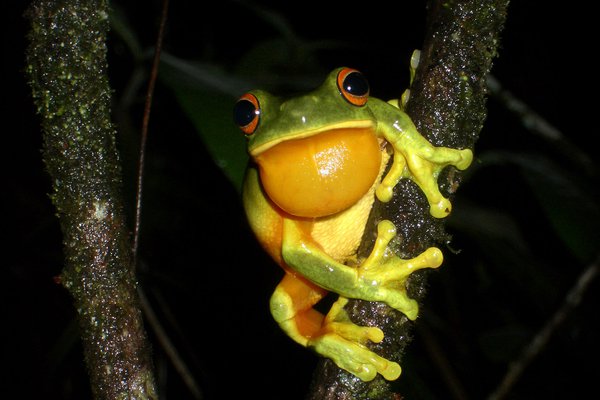 Noisy frogs - What can I do?

“I have Bleating Tree Frogs in my garden that are noisy and my neighbours have complained about the noise. What can I do?”