Utter the word “Chile” and see what happens. I wager that South Americans and foreigners alike would soon conjure up images of majestically snow-capped peaks, high-altitude trekking, and treacherous bus routes with death defying views on the edge of the Andes. This image is certainly true for the eastern side of the long and slender finger that extends from 17° S latitude, where Chile borders Bolivia and Peru, to 56° S, where Chile tapers off into Cape Horn. The latter, southern tip is historically one of the most hazardous shipping routes on the planet, referred to bitterly by seasoned sailors as a “mariner’s graveyard”. The western coastline however, particularly in the central and southern parts of Chile, paints a very different picture (~40° S). Here powerful surf explodes off rocks scrubbed bare from eons of incoming ocean energy, and brown bluffs as high as skyscrapers drop down to sandy beaches that ultimately glide into the frigid waters of the Pacific Ocean.

My AM trip was conducted primarily under the guise of a consultancy with key researchers based in Valdivia at the Austral University of Chile, including Drs Pablo Saenz-Agudelo, Mauricio Soto, Andrea Silva, Cristian Correa, as well as additional “off-site” collaborators Luis Castañeda (ICBM, University of Chile) and Erwin Delrieu-Trottin (IRD, France). Our fully funded, two-year project with CEHUM aims to use environmental DNA or eDNA to survey the good, bad, and the ugly around the expansive Cruces River Wetlands, an aquatic region that is part of the RAMSAR convention and thus now protected by the Chilean government. More specifically, we are collecting and filtering estuarine water samples to characterise vertebrate biodiversity using eDNA and next-generation DNA sequencing. For example, when a mammal, bird, or fish pass through the riverine system, they shed tissue, cells, secretions and excreta. By analysing the DNA present in the water, we can see which species have passed through it within a given time frame. This emerging technology can therefore provide us with a quick and inexpensive means to census faunal assemblages along their regional waterways.

In this part of Chile, hundreds of rivers descend from the Andes to form lakes, some quite large, which then drain into the ocean via smaller rivers. In our case, the Cruces River (known locally as Río Cruces) flows up, down, and around the city of Valdivia, diffusing into the surrounding wetlands that host significant biodiversity in the form of marine mammals, water fowl, and native fish species. In a geological sense, these wetlands in Valdivia are new, the birth child of the strongest earthquake on record in 1960 (Great Chilean Earthquake – magnitude 9.5 on the Richter scale). The soil surrounding the major river system, at that time, simply sloughed off and into the drink, creating muddy and shallow river beds where none existed before. In terms of the surrounding wildlife, envisage clusters of cormorants dipping and diving for their next fishy meal, elegant black neck swans (Cygnus melancoryphus) nipping almost exclusively at single-source aquatic plants, fishes from the Galaxiidae family darting up or down the river based on the ebb and flow of the tides, and invasive minks (Neovison vison) systematically decimating the native wildlife at the shores edge. This niggling mammal was introduced for fur farming in the 1930s in South America, when the fur industry was at its peak. As the industry collapsed, these minks were released and/or escaped their enclosures and continue to spread their influence further and further south to rivers, coastlines, but particularly farmers’ fields that often cannot handle its load.

Preliminary results from the project have revealed the presence of the invasive mink using this eDNA technique as far as 40 km up the Cruces River, as well as some of the native but largely cryptic mammals like Coipu (Myocastor coypus) and Güiña (Leopardus guigna). Native fish such as Puye (Galaxias maculatus) and Peladilla (two more Galaxiidae species of the genus Aplochiton) have also been detected, as well as exotic fish such as carp and brown trout, for which artisanal eradication measures are underway. As one final example, the South American sea lion (Otaria flavescens), which can get up to 180 kg and on more than one occasion I have seen traipse into the Valdivian fish market for free handouts, has been detected both up and down the river.

This trip was unconventional for me given the lack of a field and laboratory component, but I felt honoured to be included in this project and help steer the eDNA ship in the right direction. 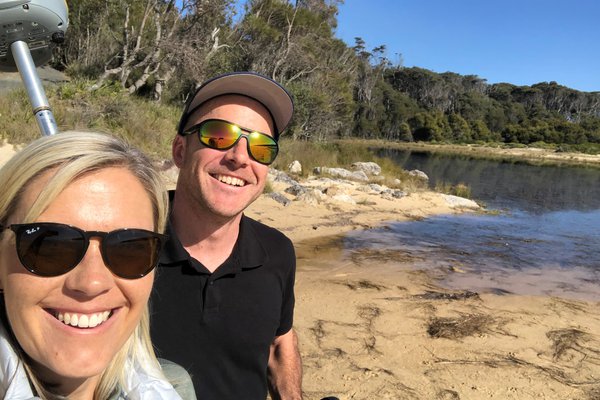 Kerrylee Rogers wears many hats. She’s a professor in the School of Earth, Atmospheric and Life Sciences at the University of Wollongong, a passionate advocate for environmental sustainability and the mum of two teenage boys.