A typical Chinese painting is a scroll - a continuous roll of silk or paper on which images are painted. Scrolls of variable length are unrolled only for viewing, for most of the time they are rolled up in storage.

Scroll paintings have a history of at least 4,000 years and are considered a high achievement of sophistication in aesthetics of visual art in Chinese civilisation.

Materials for scroll paintings are similar to those used in calligraphy, suggesting a strong connection with writing. Known as Four Treasures they include paper, brush, ink-stick and ink-stone.

Paper, popularised about 2,000 years ago, is distinctive in different regions of China. A non-absorbent paper is used for paintings where an outline is done first and then colouring filled in to finish the image.

The brushes include those with a sharp tip for the outline, made from the hair of a deer, oxen, goat or rabbit. The ink was typically in the form of a dried, rectangular stick - black ink was made from compressed pine-soot and water-soluble glue.

Scroll paintings often have inscriptions preceding or following the image. These inscriptions may include a poem or comment composed by the painter, explaining the circumstances or inspiration that helped to conceived the painting.

They may also include colophons (emblems or details about the picture), or commentary placed onto additional sheets of paper or silk that follow the image itself. Such comments may be written by friends, collectors or others who appreciate the painting - they could be by contemporaries of the artist or viewers in following generations, sometimes centuries later.

These writings, frequently in a form of rhapsody (joyful praise), would comment on the quality of the painting, express the appreciation, sketch the artist’s biography, explain historical or aesthetic context. Sometimes a comment would refer to and expand on or engage in a polemic with the earlier comments.

And quite often, to personalise these appreciations, the painter, collector, or the viewer placed their personal seals (stamp) in red ink as the mark of pride of authorship or ownership. So, over time some scroll paintings would accumulate several comments and numerous seals, indicating the popularity and esteem the painting acquired. 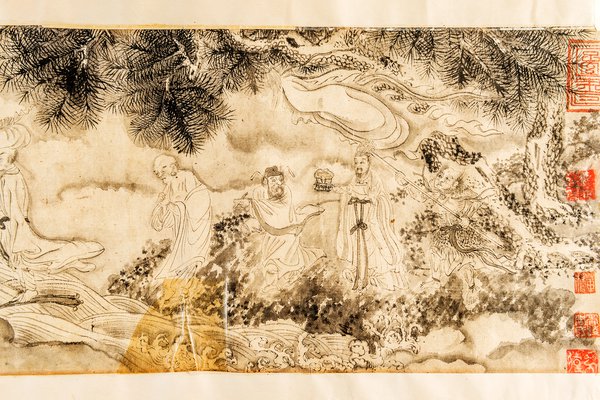