Australian Museum staff rarely have an opportunity to collect marine invertebrates in Antarctic waters. Most of our Antarctic holdings are given or donated by various expeditions.

So when Dr Andrew Constable of the Australian Antarctic Division (AAD) invited an Australian Museum scientist to participate in an Antarctic sampling program, I accepted eagerly.

The sampling program aimed to assess the nature and extent of benthic habitat types and communities within the Australian Economic Exclusion Zone in Antarctic waters.

Supported by the Fisheries Research and Development Council, it also aimed to assess the vulnerability of these sea floor habitats to interactions of commercial trawling and longline fishing.

This information may be used to assist in managing vulnerable marine ecosystems and developing a representative system of marine protected areas.

Sampling was conducted from the icebreaker RSV Aurora Australis during the AAD’s 2009/10 summer program, an 8-week round trip to supply Antarctic base stations.

But conducting field work in Antarctic waters can be difficult, frustrating and dangerous. Not only is our knowledge of the area’s bathymetry scant at best, but the unpredictable freezing weather and powerfully disruptive and capricious pack ice can make the average beam trawl a very difficult operation.

An area known as the Bruce Rise was initially selected but our underwater cameras revealed a rather featureless and muddy tabletop with little habitat variation, and catches from the trawls we made were mediocre at best.

The sampling focus then moved to a more promising site to the west near the Tressler Bank about 40 nautical miles north of the Shackleton Iceshelf.

This new area exhibited a more varied and interesting terrain with canyons and valleys promising a richer biota.

Beam trawls made over the next 11 days returned excellent collections, and teams of biologists worked around the clock in two shifts to sort, identify, count, photograph, weigh and preserve the samples.

Present were important habitat-forming invertebrates such as corals, sponges, bryozoans and ascidians, with abundant echinoderms, especially brittle stars and sea stars, and some excellent examples of amphipods and isopods.

Persistent pack ice hampered the investigation of fishing interactions from longlines, but the study obtained valuable digital images of unexplored areas and the behaviour of longlines on the sea bed.

The knowledge gained from the program will help to inform and reinforce sustainable management of fishing and conservation measures.

And the Australian Museum will gain a fine collection of Antarctic material from an area that has never been sampled before with the prospect of new species to be discovered.

Scientific results of the trawling expedition of H.M.C.S. "Thetis"

Scientific results of the trawling expedition of H.M.C.S. "Thetis" off the coast of New South Wales, in February and March, 1898, Tunicata

Animals belonging to the bivalve family Pulvinitidae were originally known only from fossil records dating back millions of years ago. 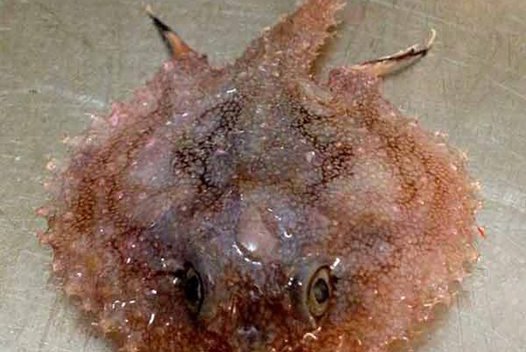 A Shortfin Seabat found in a box of king prawns that had been trawled off Stockton Beach, New South Wales, August 2013.