It's not just a category; it's about directing scarce conservation resources to the species most in need.

We’re all familiar with the terms ‘Endangered’, and ‘Threatened’ when referring to species under threat from extinction. But the process behind these categorisations, and just how important they are for biodiversity conservation, is a bit of a mystery to most.

While there are local, national and regional lists of threatened species, it’s the internationally-recognised, global list that has the most influence on biodiversity conservation worldwide. The IUCN Red List of Threatened Species (the ‘Red List’) is the list that provides the most objective, comprehensive and scientific information about the conservation status of species on a global scale.

Species are assessed using IUCN Red List Categories and Criteria to determine their relative risk of extinction. The categories range from Extinct (pretty self-explanatory) to Least Concern (meaning that a species is safe… for now). For some species, though, there’s not enough information for scientists to decide if the species is even threatened or not, and these are categorised as 'Data Deficient'. Alarmingly, about one-fifth of all amphibians fall into this category.

Who makes the decisions about what category a species is listed as? Mostly, it’s experts from around the world- the people that know the species best. Their combined knowledge is compiled and reviewed, and then the species is assessed using standard criteria.

This global list, which has existed for 50 years, is vital for directing scarce conservation resources to the species that need it the most. The Red List can also be used to identify sites for conservation action (ie. sites that have a high proportion of threatened species), and when assessments are updated over time, they provide valuable warnings about the state of biodiversity.

The Red List is an important tool for funding allocation, and many funding agencies prefer to support projects working on species listed as threatened on the Red List or at sites where these species occur. The Red List is also used to manage natural resources at individual sites (eg. in Environmental Impact Assessments), in national development policies and legislation, and in multilateral agreements (eg. the Convention on International Trade in Endangered Species of Wild Fauna and Flora- CITES).

Because the Red List is so important in land-use decisions, biodiversity monitoring and wildlife conservation, it’s important that it’s kept accurate and up-to-date. As new species are discovered, it’s vital that they are assessed, and it’s equally important that species already assessed are regularly updated to reflect the current state of knowledge. Just because a species was doing just fine five years ago, it doesn’t mean that it is now. And if species aren’t assessed, or have outdated conservation statuses, then conservation resources may be directed to species that don’t need it as much as others.

Because of the importance of the Red List, I help update the list for amphibian species in mainland Southeast Asia (Cambodia, Laos, Myanmar, Thailand and Vietnam). Fantastic colleagues and interns help me with this enormous and ongoing task, but it’s slow-going and largely done in our spare time.

This year, we’ve added two newly discovered species to the Red List (the Vampire Flying Frog Rhacophorus vampyrus and Helen’s Flying Frog Rhacophorus helenae) and reassessed a species urgently needing it (the Lao Salamander Laotriton laoensis). All three amphibian species were assessed as Endangered, which is obviously not good news for them. However, I hope that their listing on the Red List will help direct much-needed conservation resources towards them and ensure their long-term survival. 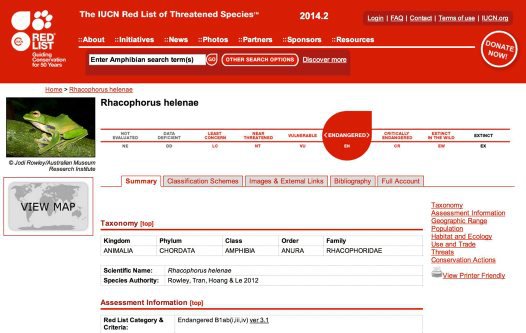 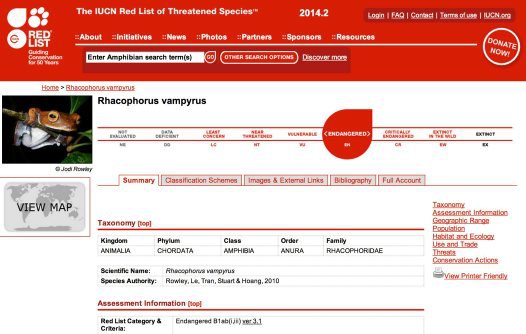 We're now working on the 50 or so amphibian species that have been recently described from mainland Southeast Asia and are not yet assessed for the Red List. We will then work on updating assessments for the hundreds of other species of amphibian from the region to ensure they are up-to-date and conservation decisions are based on the best information possible.

The IUCN Red List of Threatened Species is produced by the Species Survival Commission (SSC) of the World Conservation Union (IUCN). The Amphibian Red List Authority (Amphibian RLA) is the branch of the Amphibian Specialist Group (ASG) responsible for maintaining the amphibian extinction risk assessments.

Thank you to Tim Cutajar for all your work updating the three amphibian species, and all the experts that provided information on the species or reviewed assessments.

The scincid Graciliscincus shonae (Lacertilia: Scincidae) from New Caledonia in the southwest Pacific: a review of the species' morphology, distribution and conservation status

Conservation Status - what does it mean?

The conservation status of a species is an indicator of how likely it is to remain alive at present or in the near future.

Why discrepancies in searching the conservation biology literature matter

Reptiles and Amphibians of Particular Conservation Concern in the Western Division of New South Wales: Distributions, Habitats and Conservation Status