Two of our researchers are pioneering new techniques for measuring changes in climate on small, and revealing scales.

In early 2009, the N.S.W. Government through the Environmental Trust and the Great Eastern Ranges Conservation Initiative awarded a grant to the Australian Museum to fund a pilot project to collect fine-scale climate data in the Hunter Valley, N.S.W. Mick Ashcroft and John Gollan from the Australian Museum built 150 ‘mini’ weather stations each containing a temperature logger. These were then placed at various places throughout the Hunter Valley.

The aim of the project was “to secure high quality climate data across a range of habitats that could be used for biodiversity and climate change modelling and informing species selection in landscape rehabilitation projects. The data generated will provide the basis for a powerful dataset for decision making as part of the Great Eastern Ranges Initiative (GER) and provide further opportunity for collaboration between GER partner organisations and landholders" (M.Ashcroft and J.Gollan).

Recently Mick Ashcroft was invited to speak at a session with other scientists about the techniques developed as part of this research project.

You were recently invited to speak to some high profile scientists in the field of genetic and species modelling. How was that?

It was an invited presentation to Prof Craig Moritz’s Evolutionary Biogeography & Conservation Group at the Australian National University. Some scientists from CSIRO (Simon Ferrier, Mike Austin, Kristin Williams) also attended. They are interested in the topoclimatic modelling and climate change refugia research myself and John Gollan have been pioneering here at the Museum as part of our ARC Linkage Grant with the University of Technology Sydney, University of New South Wales, Central West Catchment Management Authority and NSW Office of Water. They plan on implementing similar methods elsewhere, with a focus on evolutionary refugia, and wanted to get my thoughts on concepts and methods. It was more of an informal discussion than a lecture, and it started over lunch and then continued in a meeting room with approximately 25 people from Craig’s team and CSIRO.

What is genetic and species modelling? What are some of the possible applications of this kind of modelling?

Our methods of genetic modelling are helping to identify fine-scale variations in climate that are important determinants of species distributions, and will help us plan climate change adaptation at the regional scale. Many scientists use modelling to understand how climate affects the current distribution of species to understand their past distributions, or to predict how species might respond to climate change but most of these predictions are based on estimates of climate based only on elevation. These often lead to simplistic predictions that species will shift to higher elevations and latitudes in a changing climate, and that many species will become extinct. However, historical evidence suggests such extinctions are rare, and many species can persist in small areas with unusual climates (microrefugia) that are too fine to be included in coarse-scale models.

How do the Museum’s collections and facilities play a role in this work?

The Museum provided funding much of our initial equipment and fieldwork expenses with the help of a small grant from the NSW Environmental Trust / Great Eastern Ranges initiative. Without this support, we probably wouldn’t have gone on to get the ARC Linkage Grant and get the resources to make this project as successful as it is now. The Museum has also supported the ~200 different landowners that are part of the project. As part of our project we are collecting thousands of invertebrate specimens that will be added to the museum collections which will be available for use by researchers around the world, with detailed information about where they were found and when.

How important is it for scientists from different organisations to get together to hear about each other’s work?

Very important. Publishing in scientific journals can be a slow process, and meeting with people gives you insights into projects that may not be in the literature for another couple of years. It is also good to get feedback on what we’re doing as it helps us stay on the right track and ensure we’re doing research that is relevant to others. Many research projects are multidisciplinary, and meeting with other scientists is always an opportunity to identify where our skills might be combined into a collaborative research project. I generally stay in touch with research done by others by reading journal articles and attending scientific conferences. The meeting at ANU was a follow up after John Gollan met Dan Rosauer from Craig Moritz’s group at the Ecological Society of Australia conference in Melbourne late last year.

What is next for your work?

We are in the final year of our funding from the ARC Linkage Project and are busy analysing our data and publishing our results. We currently have two PhD students (Andrew Letten and Eve Slavich from UNSW) looking at how well our topoclimatic grids can explain the distribution of biodiversity compared with more established methods, and John Gollan is looking at whether populations of ants are more stable in locations where the climate is more stable. We’re looking at improvements to our methods, as well as applying our results to directly tackle applied conservation issues. It is a relatively new scientific field, and there are still many opportunities for further research projects after this.

Mick has lived and worked in the Redfern community for decades where he has established programs to help the local community and drive self-determination and Aboriginal social justice.

As a leading natural history and cultural institution, the Australian Museum (AM) has a responsibility to educate, inspire and act on environmental sustainability.

What are we doing?
Achieving climate neutral
Learn more 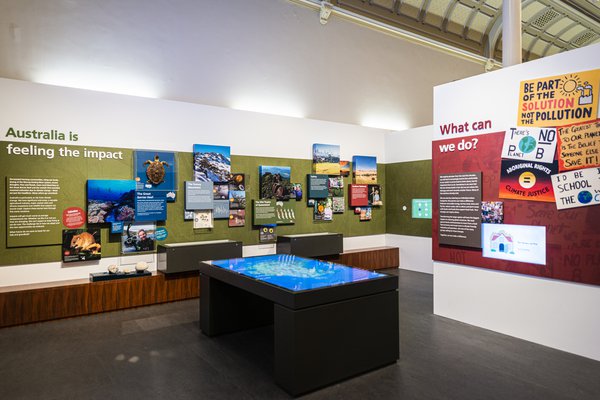 Discover the exhibitions on display at the Australian Museum and online.

24 January 2019
Read more
Back to top
You have reached the end of the page. Thank you for reading.