Watching the enormous crocodiles and stingrays from the beach, its easy to feel like you are in the wilderness outside the Aboriginal community of Pormpuraaw on the remote western tip of Cape York Peninsula. However, the even here the industrialized world intrudes in the form of ocean borne plastics, carried by the tidal currents from thousands of miles away. Pormpuraaw suffers from the greatest concentrations of floating plastic fishing net, also known as ghost net, anywhere in Australia. Artist and community elder, Sid Bruce Short Joeis only too aware of the problem: Nowadays we get net everywhere for Cape York. Not good. They damaging everything.

Lost or abandoned nets from fishing vessels, or ‘ghost nets’, can be up to 6 kilometres long and are known to kill more than 200 species of marine animals and birds. The waste nets also damage culturally and biologically significant reefs, and can be hazardous to the small boats typically used by Aboriginal people.

Fortunately, Aboriginal communities in the Gulf of Carpentaria and Torres Strait are taking the lead in dealing with ghost nets, removing them from beaches through their Caring for Country and Ranger programs. Pormpuraaw’s local Indigenous rangers regularly patrol about 70km of local beaches, removing nets that are sometimes so large they need heavy earth-moving machinery to haul them out of the ocean. However, instead of being burnt or dumped, the waste net is increasingly being recycled and used for sculptural works by the community’s artists.

The contents and connections of Pormpuraaw’s ghost net art form almost an encyclopedia of the local marine life. Crocodiles figure prominently, as do fish, turtles, jellyfish and sea birds. There is also a playful, almost whimsical quality to their work: amongst their recent creations are a ghost net mermaid, an aeroplane, and a smiling green frog with a long red tongue. According to the art centre’s website: We like making large works because children laugh and dogs bark when they see them. 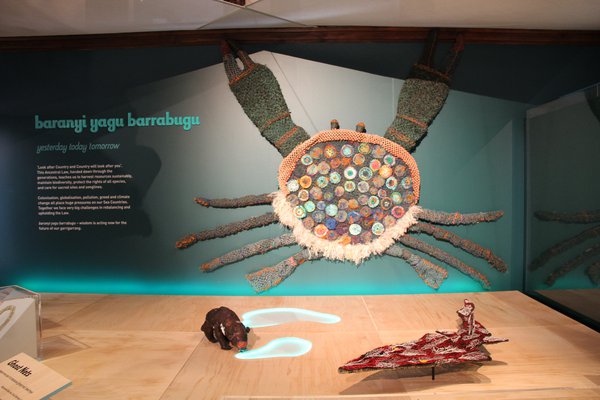 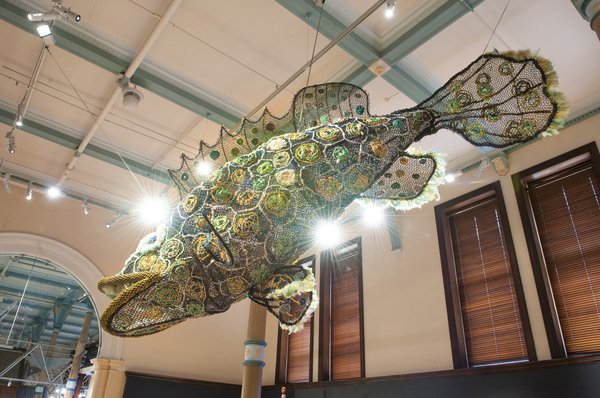 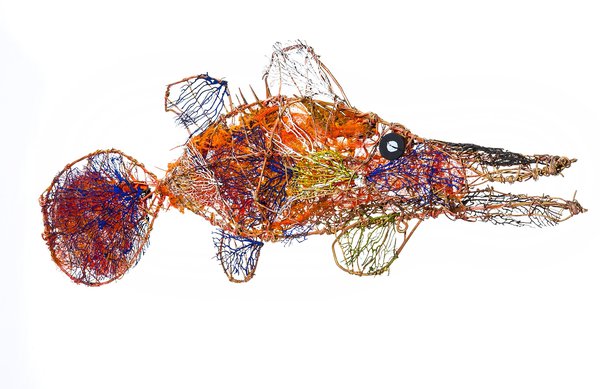 However this resilient humour does not belie the deadly problem faced by the community and its artists: namely, the declining abundance of marine animals that form the bulk of the ommunity’s traditional food. According to Sid: ‘Before when there were no fishing nets we were plentiful of everything; today, not so much.’ In the last few years, Sid has noticed the nets killing marine animals: ‘like turtle, other big fishes that get caught in nets. Last time I seen a dead porpoise wrapped up in fishing net which was a shame for us.’

Sid is particularly concerned about the local decline of a culturally significant species, the sawfish, which is traditionally eaten by people when in mourning for deceased close relatives. While the fish was plentiful when Sid was a boy, he now reflects: ‘Today we are missing the sawfish. You can’t see much of that.’ The problem, according to Sid, is that the animal’s large serrated beak or rostrum makes it vulnerable to being tangled up in nets. ‘Once you get caught in the net, every time you wiggle, try to break through, all the net will be notched up on the cone’, he explains. The decline of this species is a challenge for a community keen to maintain its traditional cultural practices.

Making the problematic ghost net into art is in fact not easy. Pormpuraaw Art and Culture Centre Co-ordinator, Paul Jacubowski, describes the net the rangers find as ‘ a real mess; a big ball: it’s got coral and fishing lures wrapped in it; it can take days to pull apart with an angle grinder’. Pormpuraaw’s artists nevertheless have a commitment to environmental activism that goes far beyond ghost net removal and re-use. One of the striking things about their practice is the consistent use of waste and recycled materials such as copper wire, aluminium offcuts, steel bars, old rope, flotation devices, and worn-out drag nets and cast nets. Paul laughingly describes the Centre’s materials procurement strategy as ‘hunting and gathering at the tip’ and ‘recycling right off the beach’.

As part of an acquisition program funded through the Australian Museum Foundation, the Australian Museum has acquired four pieces of Pormpuraaw ghost net sculpture for its new Garrigarang: Sea Country exhibition. Together, these artworks illustrate the versatility and story-telling potential of ghost net as a raw material. Elliot Koonutta’s Crocodile Sorcerer depicts a man riding on a crocodile’s back, a reference to local stories about sorcerers (including Elliot’s grandfather) who formed a special bond with a saltwater crocodile. They could swim with their animal, make it bring them food, or even make the crocodile attack their enemies.

Simon Norman’s Crocodile Spirit Man is a two-metre-high human figure with a crocodile’s skull for a face. The spirit man is the vengeful ghost of someone killed by a crocodile who returns to torment the living. The Museum also collected Simon’s ghost net Barramundi, a reference to one of Simon’s family totems and an important local food species. The fourth piece acquired is the Mundha, or shovel-nosed ray, made by Sid Bruce Short Joe. As Sid explains, this fish – which can also be eaten by people in mourning – has become increasingly important to the community in recent years following the decline of the sawfish.

The four Pormpuraaw sculptures are now part of the permanent Garrigarang: Sea Country exhibition at the Australian Museum, For his part, Sid Bruce Short Joe hopes that the Australian Museum’s visitors will walk away with a better understanding of the impact of ghost net. As he states it: ‘For me, my opinion: they gotta think real hard!’ 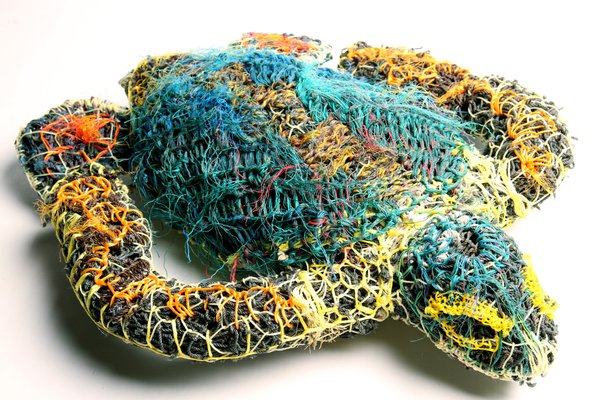 Discover creative solutions to reducing waste and understand the importance of caring for Country in these in-depth, hands-on weaving workshops.