75 years ago the Museum received an intriguing donation, a replica of the Aztec Calendar Stone.

In 1936 Mr EJ Bryce of Sydney returned from his travels around the world carrying a token of history, prophecy and myth: a plaster cast of the Aztec Calendar Stone from Mexico.

He donated it to the Trustees of the Australian Museum who planned to showcase the Stone in the Museum’s main entrance according to the Sydney Morning Herald in July, 1936.

That same year, the Australian Museum Magazine featured the carved souvenir on its cover and detailed the many meanings attached to its glyphs and geometrical composition.

The original Stone, at 3.7 metres in diameter, currently stands in the Mexican Museo Nacional de Antropología (MNA or the National Museum of Anthropology). The Aztec Calendar Stone, which these days is referred to as the Sun Stone, was discovered in the Aztec capital now buried below Mexico City.

Since its discovery academics over the centuries have speculated about the real purpose of the Stone.

No ordinary calendar
A popular theory was that the Aztecs used the Stone as a timekeeping device with religious and agricultural calendars which ran concurrently. In the agricultural calendar each year consisted of 18 months with 20 days per month. Five additional days were added to bring the yearly total to 365. Each day is represented by a unique symbol on a wheel of the Stone, including a crocodile, jaguar and a flower.

End of the world
Moving inwards, the historical and prophetic part of the Stone represents five suns or ages. There are four squares for the ages which have already passed. The centre of the Stone symbolises the present age with the Sun God Tonatiuh, joined by Olin, which apparently predicts that the world will end in an earthquake. Catastrophic destruction never seemed far from the minds of the Aztecs.

Human sacrifice
Archaeologists suggest the Stone was used primarily as an altar for human sacrifice once every 52 years to ensure that the sun would not die. In the ritual, priests would light a fire in the chest of a sacrificial victim who would be placed across the symbol of the Sun God.

We don’t know which interpretation piqued Mr EJ Bryce’s curiosity. He was a widely-travelled man who chose a memento representing aspects of cultural history, myth and mortality. Along with this replica of the Aztec Calendar Stone, he made several other generous contributions to further the Australian Museum’s anthropology work.

Look out for the Australian Museum's exhibition on the Aztec Empire with over 200 cultural treasures from Mexico’s major museums, from 13 September 2014. 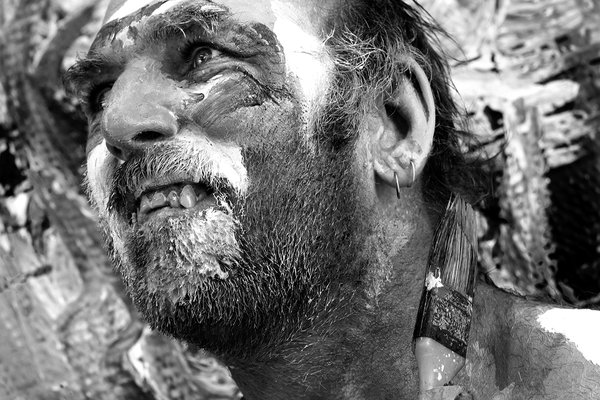 My name is Josh Lennox and I love to paint and I like doing Aboriginal painting. Painting makes me feel happy.