Howard Hughes first joined the Australian Museum as a Cadet Preparator at the age of 15 in 1941. As a cadet, Hughes was based primarily within the Preparation Department, where he was taught the skills of taxidermy, molding, casting, and object display. However, it was a long-standing interest in photography that resulted in Hughes’ eventual move to the Photography and Visual Aids Section.

In 1996, Hughes recalled that from the ‘earliest times’, the museum had an established lecture program that integrated visual aids, first in the form of projected lantern slides and later, by 1940, short silent features. The expenses related to film production significantly limited the resources available to Hughes and his team; however, various sponsorship agreements allowed the collection to expand and develop.

The first of these donations came from the Carnegie Foundation, received after American Taxidermist Frank Tose visited the Australian Museum and was greatly impressed by the collection. This grant was used to purchase both a 16mm Bell & Howell motor drive camera and a 16mm sound cine projector.

With new tools in hand, Hughes, in collaboration with Charles Clutton (Chief Preparator and Photographer) and Frank Macneill (Curator of Invertebrates), began to shoot and produce their own ‘in-house’ films, the first of which, ‘Among the Mangroves’, was based upon a lecture given by the Curator of Entomology, Anthony Musgrave.

The ongoing success of the Australian Museum’s production of natural science films became closely tied to their commercial viability. ‘Black Swan’ was the first production to be commercially screened, on ABC Channel two, soon followed by ‘White Clay and Ochre,’ a film that documented indigenous cave paintings.

The proceeds from these two films allowed for the expansion of the Photography and Visual Aid Section’s resources and permitted Hughes’ most successful film, ‘Carnarvon,’ based upon the cave paintings found in Carnarvon Gorge in Central Queensland, to be produced. ‘Carnarvon’ went on to receive an award for excellence in production at the 1969 Columbus Film Festival.

A collaboration with BHP in the early 1970s produced a series of environmental films, continuing the growth of scientific films produced by Hughes and the Australian Museum. These short, educational films featured a diverse range of Australian reptiles, mammals, and insects. An original score, composed by jazz musician John Sangster, accompanied the films.

Following the success of these collaborations, the Aboriginal Arts Board sponsored a series of short films focused on craft subjects. These included: ‘The Mans Spear’, ‘Mimona’s Basket’, and ‘Dugong Dugong’. These films marked a major shift in technique by Hughes, with the inclusion of a narrative soundtrack provided by extensive interviews and recordings of those indigenous people involved in the production.

After spending more that forty years at the Australian Museum, Hughes retired, having been involved in the production of over twenty five films. Reflecting on his career in 1996, Hughes noted that ‘as a Photographer and Visual Aids Officer, film making was just one of my functions and should have been my full time occupation… but I got the most personal satisfaction from my Anthropological subjects’.

Quotes from Howard Hughes taken from correspondence with, the then Australian Museum Archives Manager, Jan Brazier, 6th May 1996. 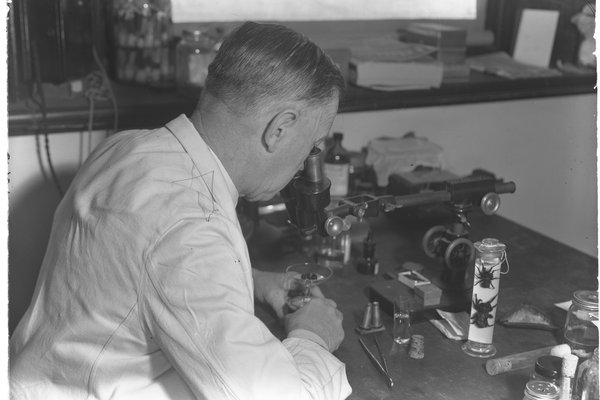 Anthony Musgrave (1895-1959) was a valuable member of the Australian Museum staff and entomology community at large.