Why did early scientists give the Green Tree Frog a Latin name that means ‘blue’?

Strangely, the original scientific name given to the Green Tree Frog was Rana caerulea, Latin for ‘blue frog’.

The first specimens were collected by John White, Surgeon-General to the First Fleet, in 1788 and sent to England to be drawn and described. Most scientists believe that the alcohol used to preserve the frog (perhaps rum) for the long sea voyage changed the colour from green to blue.

The skin of a green frog contains both blue and yellow pigments, and these combine to create the bright green coloration. Alcohol can leach or destroy the yellow pigment leaving the frog blue. While this is plausible, and certainly still occurs today with frog specimens in museum collections, in this case I’m not so sure.

The problem is we don’t know whether the frog was green or blue when it went into the preserving jar in 1788. It was not officially described until 1790, when it appeared in White’s Journal of a Sea Voyage to New South Wales, as ‘Blue Frog, speckled beneath with greyish; the feet divided into four toes; the hind feet webbed.’

The illustration, by noted museum artist Sarah Stone (see above), shows two large blue frogs and two smaller ones, one on its back to show the grey speckled surface ‘beneath’.

Scientists in the ‘it was the alcohol’ camp say the description was probably written by a British scientist, not by White, and that White (months away on the other side of the world) probably didn’t get to see the book before it was published.

But to my mind, it’s quite feasible that White actually collected a blue specimen. Blue frogs occur naturally in the wild (as the above photo shows) because of chance mutations in the gene for the yellow pigment, leaving just the blue to be expressed. There are also bright yellow versions that lack the blue pigment. (By the way, you find the same thing with cicadas, where the Green Grocer, Yellow Monday and Blue Moon are all colour variations of the same species.)

What we do know from the history of collecting is that strange and curious specimens tend to be collected more often than normal varieties. And even if the original specimen of this frog still existed (it was destroyed during a London bombing raid in World War 2) we’d be none the wiser, because it would still be blue.

So until someone can find a reference that solves the mystery, perhaps in one of White’s journals or letters, I’m keeping the true-blue frog theory alive. 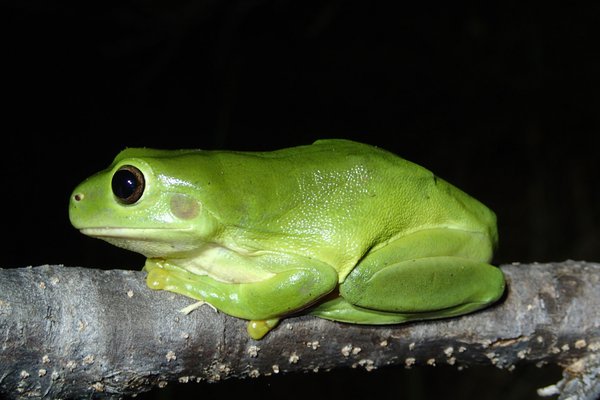 The Green Tree Frog is a familiar frog to many Australians and is the most popular species of pet frog overseas.

The Red-eyed Tree Frog is one of eastern Australia's most colourful frogs.

Litoria fallax
Find out more
Back to top
You have reached the end of the page. Thank you for reading.