Examining rare material of a land snail species that was described 120 years ago from two remote islands in the Kimberley has exposed that what was thought to be one species found on two islands are actually two species. Each of these two species occurs on one island only and represents its own genus. This find underpins the relevance of even small islands in the Kimberley as refuges for the long-term persistence of animal lineages that are not found on the mainland.

The exploration of Australia began by sea and so it is not surprising that some offshore islands were amongst the first places Europeans set foot on. Plants and animals collected during these early voyages made their way into museums in London and Paris, where they formed the basis for the descriptions of new species.

However, because of their remoteness, many of these islands have never been revisited by zoologists and the species reported to occur there often have remained taxonomic enigmas. Recently, we had the rare chance to examine material of one such enigmatic species that was collected in the late 1980’s by a joint Australian-American expedition.

This species, called Damochlora millepunctata, has originally been described in 1894 by the preeminent malacologist at the time E.A. Smith in London based on some shells that were picked up on two islands, Baudin and Cassini Island, both about 30 km off the coast of the Western Australian Kimberley region. Apart from the original specimens, which are now housed in the Natural History Museum in London, additional specimens were only collected once by the above-mentioned expedition. This material is now housed in museums in Chicago and Perth.

However, these specimens had remained unstudied until very recently, when we extracted DNA from them to analyse the relationships of Kimberley land snails more broadly. There weren’t any remarkable differences between the snails from the two islands. However, the DNA lab results revealed that the two island populations were genetically surprisingly distinct. In fact, they were genetically so different that we questioned whether they really represented the same species.

To fathom matters, we dissected the snails and studied their genital anatomy, probably the most suitable taxonomic indicator in land snails. What we found was quite remarkable. While having nearly identical shells, the genital anatomy of these snails differed so clearly that there was no doubt that indeed they were different species. In fact, the differences were on par with differences usually found between different genera. For example, while the snails from Baudin Island had an epiphallus (a spermatophore-forming organ), the ones from Cassini had none (picture). Both island forms differed in other important genital characters, too. This could have only one meaning: These two species did not belong to the same genus. So, not only did we recognise two species where there was only one known before, but we also had to describe a new genus for one of them.

While the snails from Baudin Island kept their previous name, Damochlora millepunctata, we named the snails from Cassini Island Nannochlora cassiniensis. Both species are the only members of the respective genera and the two islands are each the only places where the species are found. These islands formed millions of years ago as result of the erosion and the flooding of the Kimberley coast. For all this time, the snails have likely persisted in isolation from each other and from snails on the mainland and have evolved into highly divergent lineages that are found nowhere else. This extensive evolutionary differentiation is captured in the formal recognition of two genera. Similar processes have occurred on other Kimberley Islands, too, which harbour many highly distinctive species that also represent their own genera.

This case is just one example to show how important the conservation of islands faunas is for safeguarding all of Australia’s biodiversity. 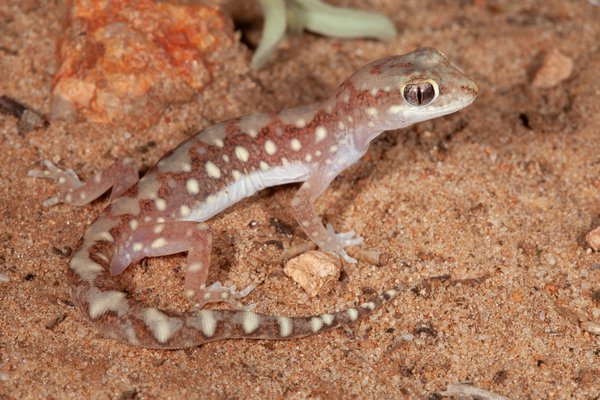 Exploring why, where and when lizard and snake species coexist.