Alcoota Station is located 200km north-east of Alice Springs in the Northern Territory.

The grass-covered plains form a thin veneer over an enormous bed of fossil bones that are around eight million years old. The bones are so abundant and tightly packed at Alcoota that it is sometimes difficult to excavate one bone without breaking the one below it.

The late Miocene (10.4-5 million years ago) was a time of global drying and cooling. As ice rapidly accumulated at the poles, sea-levels fell, rainfall decreased and rainforests retreated. Many plant and animal groups died out and other forms, better adapted to a drying world, took their place. Australia was isolated from other landmasses but its northern edge had collided with groups of islands in South East Asia.

Thousands of fossilised bones and teeth of many different animals have been found at Alcoota. The animals include one of the largest birds that ever lived, the gigantic thunder bird Dromornis stirtoni, the wolf-sized Powerful Thylacine (Thylacinus potens) and the large leopard-sized Alcoota Marsupial Lion (Wakaleo alcootense). 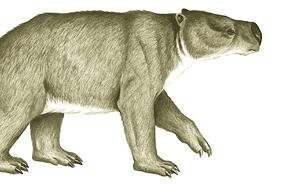